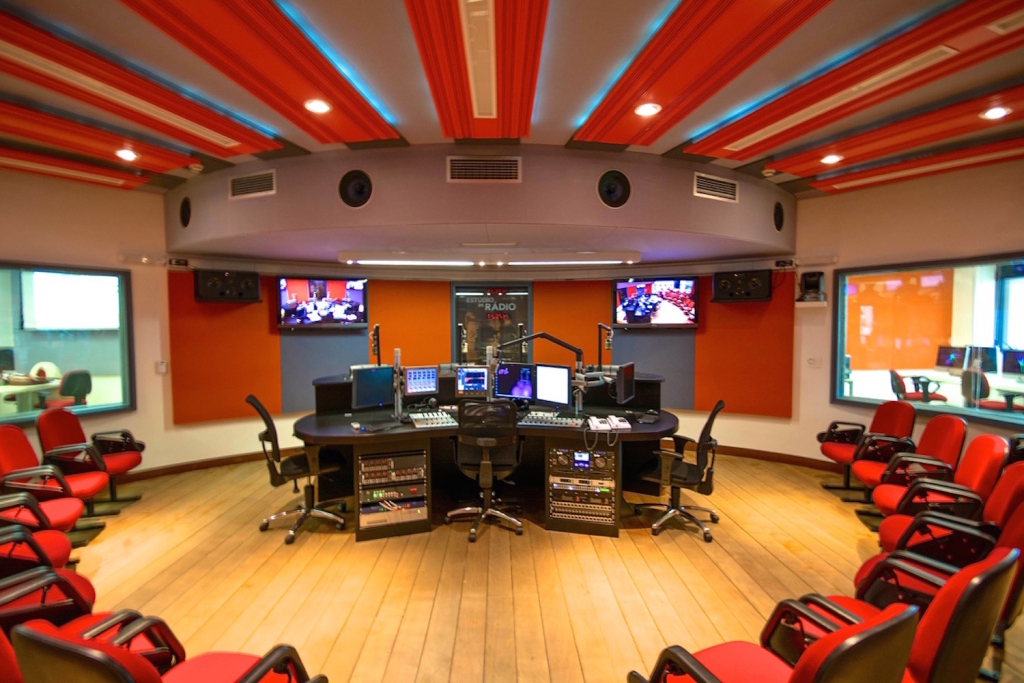 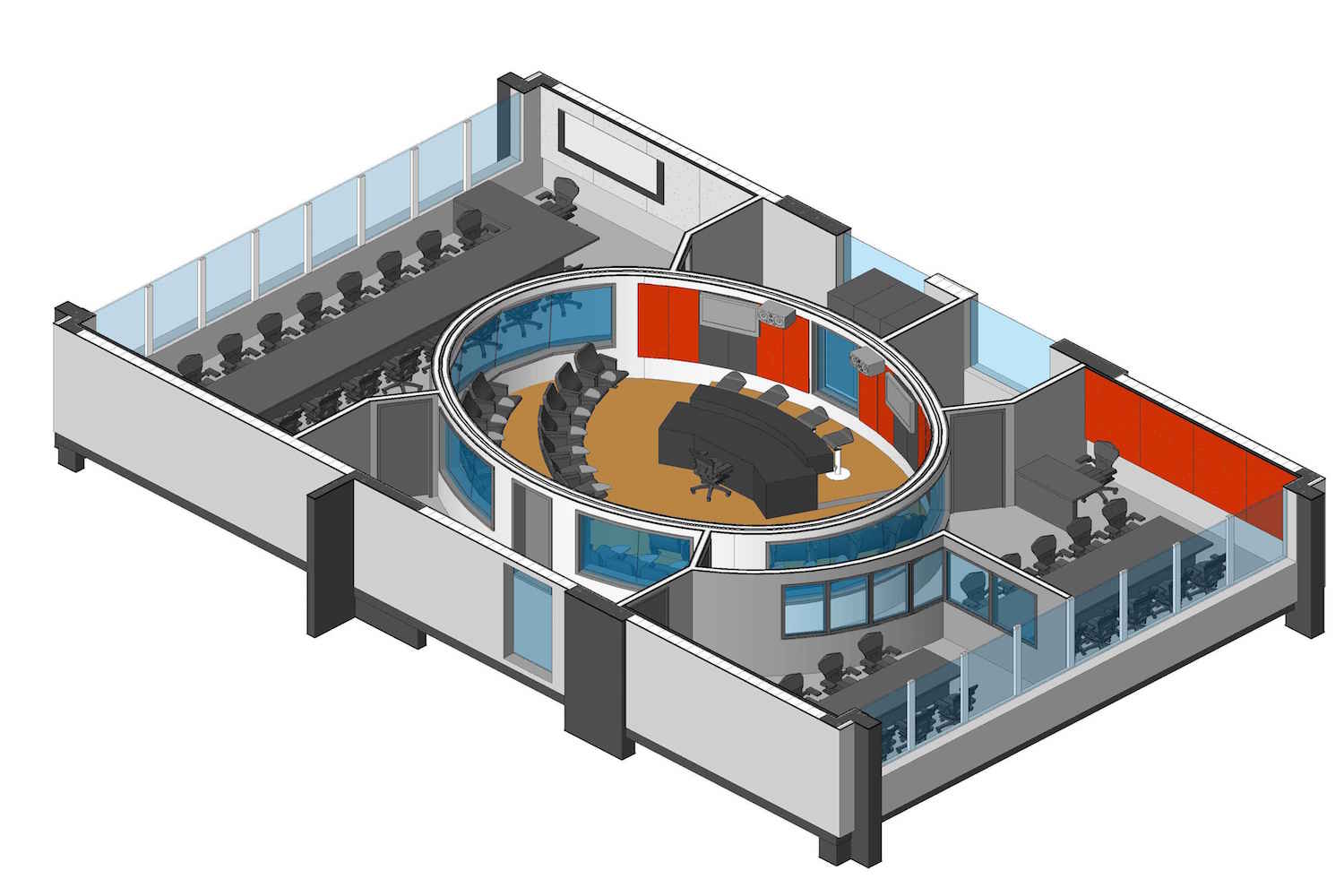 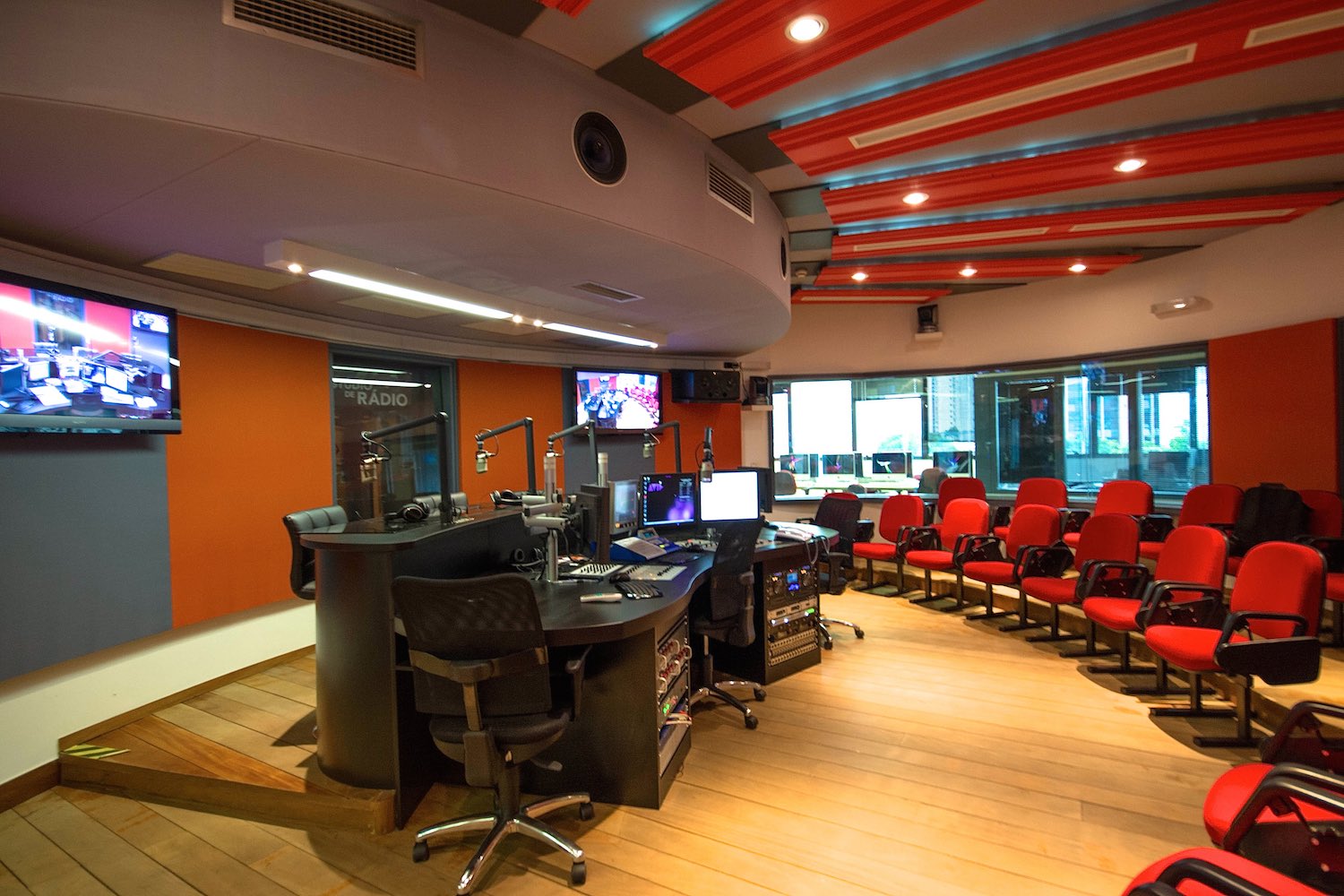 SÂO PAULO, BRAZIL: ESPM, one of Brazil’s premiere institutes of higher learning has inaugurated a cutting edge Broadcast Teaching Center for its São Paulo Journalisism Campus. Positioned as an elliptical, six-station teaching island, the 45 sq. m / 480 sq. ft. classroom/production center provides students with full visual access to all production/ broadcast activity.  The classroom enables students to immerse themselves in the hyper-realistic broadcast environment, both as working participants and as observers.

‘This project was initiated in 2011 by Gabriel Nyari, ESPM’s A/V Technical Supervisor at the time,” reports WSDG-Walters-Storyk Design Group, Brazil Partner/GM Renato Cipriano. “Nyari worked closely with WSDG Project Manager, Breno Magalhães and I throughout the 2+-year design and construction process.  Our mandate was to develop a comprehensive master plan including production and broadcast studios, office spaces and meeting/conference rooms. And, to design and fine-tune the studio’s acoustics,” Cipriano says.  “Because it is situated above and below active classrooms, we stipulated complete room-within-room studio construction.  This floating system enabled us to isolate all sound emanating from the studio and exclude external sound from encroaching on student productions and broadcasts.”

Extensive pre-planning sessions with Nyari and ESPM, São Paulo, General Director of Graduation, Luiz Fernando D. Garcia, inspired Cipriano to recommend an oval configuration for the glass enclosed production/teaching suite.  “Nyari and Garcia were determined to make this studio a showplace that would inspire and motivate students,” WSDG PM Breno Magalhães explains.   The elliptical shape literally places it at the hub of the floor.   Two expansive studio windows flood the area with daylight, and, they provide every student who passes by with a sense of the activity and excitement generated within.  Nine spoke-like ceiling treatments enhance the rooms’ acoustic quality and lend additional visual support to the wheel-like, design concept,” Magalhães adds.

“Our new studio complex was initially envisioned for the Journalism Course, but a number of other ESPM disciplines have also found it extremely useful,” says Daniel Gomes, ESPM Technical Supervisor for Sound & Video. “We make every effort to comply with their requests, and also coordinate studio access for extra-curricular and institutional events. This investment has proven itself an invaluable asset,” says Gomes, who collaborated with WSDG on the project’s final stages, including its full commissioning, and now supervises ESPM Broadcast Journalism Center activities.

Luiz Fernando D. Garcia, who mentored the project, remarked, “WSDG was recommended for this project by a number of construction, equipment sales and installation firms who we contacted during our design search. Those endorsements coupled with examples of WSDG’s proficiency on ambitious projects for major universities around the world convinced us of their professionalism. Their design and construction process was extremely satisfactory. Both the faculty and the student body are pleased with our new Broadcast Education Center.  We are confident that it will enable ESPM to provide this growing industry with a new generation of highly qualified and enthusiastic creative production personnel.”

“Education has been a primary WSDG focus for many years,” said company Partner/Director of International Relations, Sergio Molho, “We’ve designed and built major teaching studios for the Berklee College of Music’s Valencia and Boston campus’s, for NYU’s Steinhardt Center, The University of Colorado, Bolder, Javerina University in Bogota, and over two dozen teaching studios for The Art Institutes across the United States. Our co-founder, architect/acoustician John Storyk lectures at colleges around the U.S., and is an adjunct professor at the Berklee College of Music in Boston.  Education is in WSDG’s DNA, and we are especially proud of our work for ESPM.”