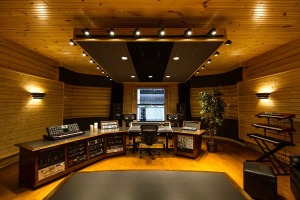 Rapidly progressing from musical experiments in his parents’ basement back to mainstream success with his electronica project Owl City, Young is perhaps best known for six-time platinum single Fireflies from debut album Ocean Eyes, which was certified platinum in 2010.

Increasing critical and commercial success has intensified Young’s focus on his music, which prompted the decision to move from his family home to a new rustic base to tackle his growing workload.

“Adam Young’s manager Steve Bursky was impressed by our Jungle City Studio in NYC when he worked there a couple of years ago,” reports WSDG (Walters-Storyk Design Group) project manager Joshua Morris. “When Adam decided to build a studio in his new home, Bursky suggested that he talk with us. I visited the site and met with him to get a true sense of what he was looking for. The local contractor was extremely meticulous in meeting all the requirements of our drawings. The results of our final acoustic measurements for reverberation time and Sound isolation met or exceeded all our goals. This studio is a gem.”

Commenting on his new studio, Young remarked: “It was a tremendous honor and privilege working with John Storyk, WSDG PM Joshua Morris and systems designer, Federico Petrone. The studio they designed exceeded all my expectations. I couldn’t be happier working in the environment they created to suit every specific need I had. It looks fantastic and sounds even better, and at the end of the day I am thrilled to be the proud owner of such a fabulous studio. Endless thanks, WSDG.”