Sound systems for sports venues reflect changes in the larger entertainment culture. Over the past several years, their low end has been beefed up to support the hip-hop and, more recently, the EDM genres that have been driving pop music and serving as the soundtrack for games. What systems designers have been reporting more recently, however, is that, as those trends improve the overall quality of sound systems and the systems specified need broader bandwidth to reproduce music, higher-quality systems are making their way into more of the venue infrastructure.

“We’ve seen a big push for better sound quality in the back-of-house areas of venues, such as training and locker rooms — especially in collegiate stadiums but also in some pro venues as well — in addition to the bowl and the court,” observes Ryan Knox, senior consultant at Dallas-based A/V consultancy Idibri. He cites the half dozen dual 21-in. Fulcrum Acoustic subwoofers in the locker rooms for the systems that Idibri designed for Baylor University this year: “Some systems that we’ve done in spaces like that would be overkill for a dance club.”

Managing the Lows
Spaces like that might actually become dance clubs, at least temporarily, as colleges and professional sports franchises look to utilize every aspect of their venues. Knox says clients are asking for sound-system designs that can be reconfigured to let spaces accommodate other types of uses between sports events. Graduations or third-party rentals, for example, can use the sound systems and thus increase the rental income for the venue while saving renters from having to bring in their own sound. 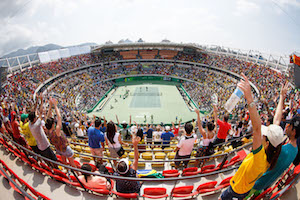 Getting more low-frequency energy (LFE) into sports venues is an established trend at this point. One that’s less established but will need to become more so is management of that energy. Steve Durr, who has designed sound systems for the Kansas City Chiefs and the Indianapolis 500 and is revamping the sound at the Indiana Pacers’ Bankers Field, says leagues have begun capping sound-pressure levels (SPL) in their venues, such as the 94-dB maximum the NBA mandates for its arenas. Much of that SPL, he says, is coming from increased LFE.

“The leagues want to move your pants leg but without blowing out your ears,” he says, mixing folksy metaphors with critical analysis. “That’s easier said than done.”

Specifically, Durr says that, like OSHA, the federal agency that regulates workplace environments, the leagues currently rely on the A-weighted decibel scale, which places less emphasis on low frequencies in its calculations. Changing the design-measurement reference is a first step: a C-weighted scale includes much more of the low-frequency range than the A and B scales.

He adds that systems designers should include more-steerable subwoofers in their designs, pointing to new sub products from Danley and L-Acoustics as examples. As LFE becomes better defined, it will behave more like higher frequencies when it hits reflective surfaces, and steerable subwoofer arrays can help keep the LFE on the seats and away from walls and floors.

Durr also relies on what he calls “an old-school technique,” narrow bandwidth sweeping, to find a venue’s low-frequency–resonance spots, which he can attenuate by using narrow-band filtering rather than by adding broadband acoustical treatments. “It’s much more accurate and cost-effective to manage low-frequency resonances with electronics than with room treatments.”

Music Meets Sports
Demand for improved sound is proving a boon to some sound-system manufacturers, which are finding new markets in sports. Idibri’s Knox notes that a few brand names that are regulars on the touring circuit, such as L-Acoustics and EAW, are making it to the short list for sports venues. Two major stadiums, the NFL Arizona Cardinals’ University of Phoenix Stadium and Utah State’s Maverik Stadium, installed L-Acoustics K2 line-array systems ahead of this season.

“These systems will usually cost more,” he says, “but they’ll also handle the requirements of music like EDM, which has extended low- and high-frequency requirements, better.”

However, Durr cautions that touring-type line-array sound systems, which are increasingly attractive to venue managers because of their musical pedigree and rider-friendliness, aren’t necessarily good solutions for installed sound. He doesn’t depend on systems manufacturers to trumpet that fact loudly.

“There are a lot of compromises when you install a tour-sound system in a venue,” he explains. “Touring systems are made to be moved often. They’re designed to be put up and taken down quickly and to fit into a truck, so they tend to be smaller boxes. Those require more processing than the larger boxes typically used for installed sound. It’s a tradeoff.”

Dan Palmer, head of integration, L-Acoustics, counters by pointing out that success in the entertainment industry has helped the brand gain market share in sports-venue installations because it’s so often specified as the touring-sound system for concerts booked into those venues. Marketed as “sports entertainment sound systems,” such systems are installed at the AT&T Center, home of the San Antonio Spurs, and the Toyota Center, home of the Houston Rockets; another system installation is under way at the Arizona Cardinals’ stadium in Phoenix.

“Our experience on the touring side has allowed us to better understand the needs of that type of facility,” Palmer explains. Citing other events that combine music and sports, such as the Olympics, for which L-Acoustics has also provided systems, he adds, “Stadium sound systems need to reflect the requirements of [contemporary] music.”

Music plays a role in other ways when it comes to sports-sound decisions. As a music source, Durr recommends .wav and other audio-file formats that have higher resolution than MP3.

“You can have the greatest sound system in the world,” he notes, “but, if the source material is poorly recorded or in an MP3 format, that is as good as the system will sound. I listen to what the DJs in Las Vegas are accomplishing,” he adds. “They’re getting spectacular audio. They’re using CDs; they’re also using Mac laptops and better converters. The difference between that and MP3 is night and day.”

Looking Ahead
To see where sports-venue A/V design may be headed, it might be instructive to see where it has been. John Storyk, the principal behind Walters Storyk Design Group, compares the work his company did on Rio’s seven Olympics stadiums with U.S. sports venues. In Rio, he says, the audio emphasis was on speech intelligibility, primarily for life-safety applications. Those venues and those that the company worked on in the Middle East and Europe have far less in the way of big A/V systems, with less emphasis on music.

However, it’s unlikely that American live sport productions will suddenly head back to the sandlot and more likely that the U.S. model will be more globally embraced, as has already happened in some markets. Noting the huge video screens and immersive audio systems now common in U.S. venues, Storyk observes, “We used to bring the game into the living room through television; now, we’re bringing the living room to the game.”