Showplace of the Eastern Shore

When the Avalon Theatre opened in 1922, vaudeville was king, silent movies cost about 15 cents, Buster Keaton was all the rage, women wanted to be flappers, men wore their hair heavy with pomade, and everyone danced the Charleston. As we celebrate the birthday of “The Showplace of the Eastern Shore,” we thought it would be fun to share its long history. Throughout the year, the Avalon Foundation will host a variety of events aiming to honor this regal lady. Attraction magazine is proud to chronicle the festivities and the history of the historic Avalon Theatre in downtown Easton.

“I fell in love the moment I walked into the Avalon Theatre,” recalls Ellen (General) Vatne, who spearheaded the resurrection of the cultural and community mission of the space. “I could feel it was full of magic. It was originally designed to celebrate the heart and soul of the community and 100 years later it continues to do just that.” 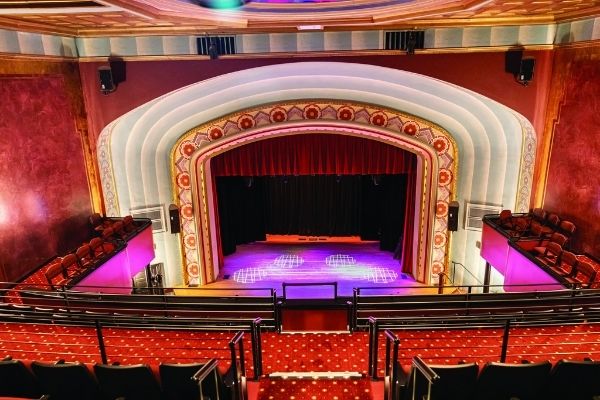 In time for her 100th anniversary, the Avalon was renovated most recently in 2020 and regained her art deco appearance from the 1930s. Photograph courtesy of Caroline J. Phillips.

Since its inception in 1922, the Avalon Theatre has been known as the showplace of the Eastern Shore. This year marks the 100th anniversary of this spectacular one-of-a-kind treasure. It is regarded as one of America’s finest Art Deco theatres still in operation thanks to a century of serious conservation efforts.

“It is – and always has been – the people that make this facility a gem,” maintains Ellen, who currently serves as the Founder Emeritus Trustee of the Avalon Foundation. “The theatre is fueled by those who work here, volunteer their time, perform on stage and, most especially, this community that has always supported the theatre.” 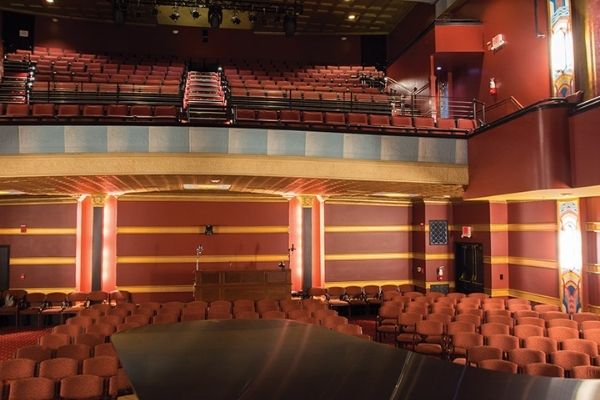 The interior of the Avalon after its most recent renovation.
Photograph courtesy of Caroline J. Phillips.

Built for $100,000, the theatre instantly became an important cultural hub, noted for architectural details like a proscenium stage, dramatic 24-foot dome and stylish lobby. In its earliest days, vaudeville acts dominated the theatre while a ballroom with live orchestra commanded the second floor. The Avalon also became the go-to place to watch silent movies, and in 1928 even served as the venue for the world premiere of a Cary Grant and Fay Wray film called “The First Kiss.”

The Avalon Theatre was so successful that in 1938 it attracted the attention of the New York-based Schine Chain Theatres, which saw an opportunity to stake a claim to this vibrant cultural center. The change in ownership catapulted the theatre into the modern era, reflecting the public’s newfound interest in talkies.

When the Depression hit and the theatre saw its clientele diminish, the Avalon got creative: It began giving away colorful Depression glass and launched a fun giveaway called “Bank Night” where moviegoers were incentivized to buy tickets. These efforts kept the theatre alive during that difficult time, so that post-Depression it was once again a thriving venue. 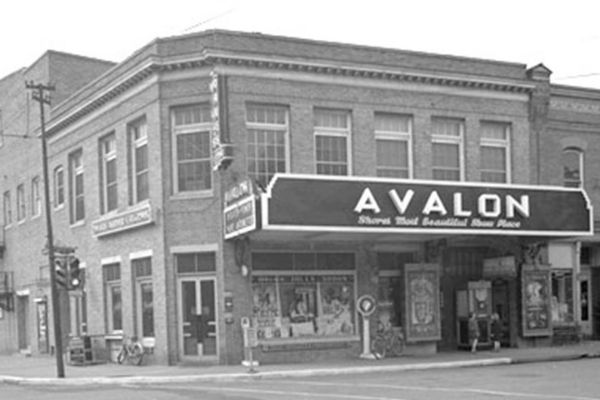 The Avalon sometime between 1938 and 1945. Photograph courtesy of the H. Robins Hollyday Collection, Talbot Historical Society.

For decades, the Avalon flourished as a movie theatre, but by 1985 shuttered its doors after its customer base dwindled, largely due to the competing realities of multiplexes and cable TV. That’s when several local businessmen, including Will Howard, the son of the original Schine Theatre manager, stepped in to renovate and reinvent the space. This group added a third story with a wrap-around terrace overlooking downtown Easton, created distinct restaurants on three levels and, most importantly, shored up the aging structure. At the same time, the Town of Easton completed a thorough renovation of the historic theatre and dug a basement level that today houses the green room, dressing rooms, as well as the MCTV studio. Following the major renovation of the building, the theatre itself was sold to a nonprofit organization called Mid-Shore Center for the Performing Arts.

Then Easton Mayor George Murphy saw the Avalon and the vitality of the downtown as inextricably linked, explaining at the time, “The Avalon is a graceful old lady who fell into despair and is being brought back to life.”

In 1990, the building reopened with three restaurants and a theatre that focused on community arts programming. However, this vibrant vision was short-lived. As the theatre floundered financially, so too did two of the three restaurants in the building. The theatre was put up for auction in 1992 and when no bidder stepped forward, the Easton government purchased the property, determined to save this important cornerstone in the heart of downtown.

Flash forward to 1994 when Ellen and John General struck a deal to lease the theatre from Easton. With this agreement, The Avalon Foundation, Inc. was born. “My heart told me I had found my calling: Making the Avalon the showplace of the Eastern Shore once again,” Ellen shares. This despite the fact that her heart sank upon seeing it in shackles. “The town had chains on the front door because it was being rented out on an ‘ask’ basis,” she recalls. “I was so sad because I knew this theatre could again become the beautiful gathering place it had once been.

Thanks to the previous restoration efforts, the theatre itself was in excellent shape so that the rebirth of the Avalon was able to focus primarily on procuring high quality programming from the surrounding community and from nationally recognized musical acts, like Charlie Byrd, Richie Havens and Rickie Lee Jones. This move once again vaulted the theatre to its position as the Mid Shore’s cultural beacon.

The Avalon has been evolving ever since. In 2009, the second story ballroom was converted into an intimate venue called the Stoltz Listening Room. Dedicated to the parents of Avalon supporter Keith Stoltz on their 50th anniversary, this popular space typically hosts nearly 100 shows each year. Original album cover art shot by acclaimed photographer Peter Turner for legendary musicians like Chet Baker, Hubert Laws & Oscar Peterson line one wall of this sophisticated space, making it a magnet for music aficionados.

In 2020, the Avalon Theatre completed its latest renovation, restoring the Art Deco design details, increasing seating capacity to 400 and modernizing systems. Notably, one element that needed little refinement was the theatre’s acoustics. Long lauded by musicians for its exceptional sound, the theatre’s original acoustic elements, such as structural angles and flared walls, remain noteworthy. Walters Storyk Design Group (WSDG), a global architectural and acoustic engineering firm, was brought in to advise on the project. Despite the design dating back to the 1920s, little more that fine-tuning was needed to bring the Avalon into the modern age. “The historic theatre’s acoustics were already wonderful. In this regard, our role was more as stewards than surgeons,” John Storyk, a founding partner of WSDG, notes.

While many other historic theatres have floundered, closed or been demolished, the fact that the Avalon has thrived for a century is a testament to the dedication of the community, which has come together time after time in service to and in appreciation of this important space.

“The Avalon Theatre is where our community convenes. It is through shared experience that we are reminded of our common humanity and the spectacular heights to which the human spirit is capable,” Al Bond, president and CEO of the Avalon Foundation, says. “While tastes and genres change, the magic continues.”

During the Avalon’s most recent renovation, it was discovered that the Avalon Theatre’s “fly”– the massive rigging system above the stage that allows curtains, lights, screens, and scenery to be hoisted and lowered – relied on a hemp rope system that had been in place since the 1930s. While its impressive longevity was a great surprise, modernization was needed.

“We upgraded the fire curtain deployment system, maintained all elements of the system, and, as a precaution, replaced the nearly 100-year-old rope,” Al Bond explains. “Based on the fact that there was really no meaningful wear, the fly should be good for at least another hundred years.”

The most recent aesthetic refresh was overseen by Don Wooters, a nationally renowned interior designer and a former Avalon Foundation board member. A Talbot County native who recalls going to the movies in the venerable theatre as a child, Don brought back the elegance that captures the splendor of what a night out has meant to the community for generations.

“I wanted the theatre to reflect its original glamour,” he explains. He applied genuine gold leaf to the lobby ceiling and brought in artisans from Argentina and France to employ a specialized technique of hand rubbing the plasterwork. “The goal is that when people enter the Avalon they feel they have arrived in a place they’ve always wanted to be.” 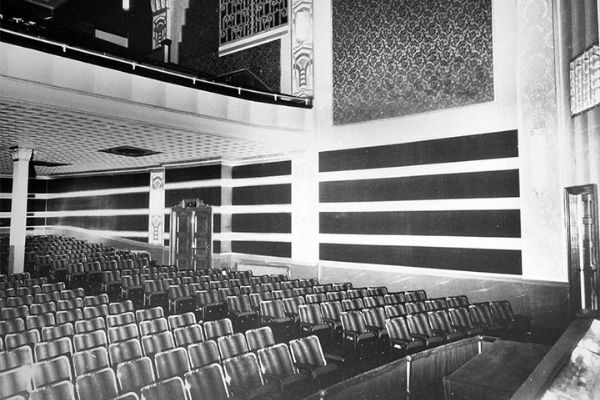 Many will remember that the interior of the Avalon once appeared this way.