In a true problem-solution scenario, New York-based WSDG (Walters-Storyk Design Group) is tasked with perfecting acoustic clarity and speech intelligibility in two Miami synagogues — all the while maintaining ancient traditions. 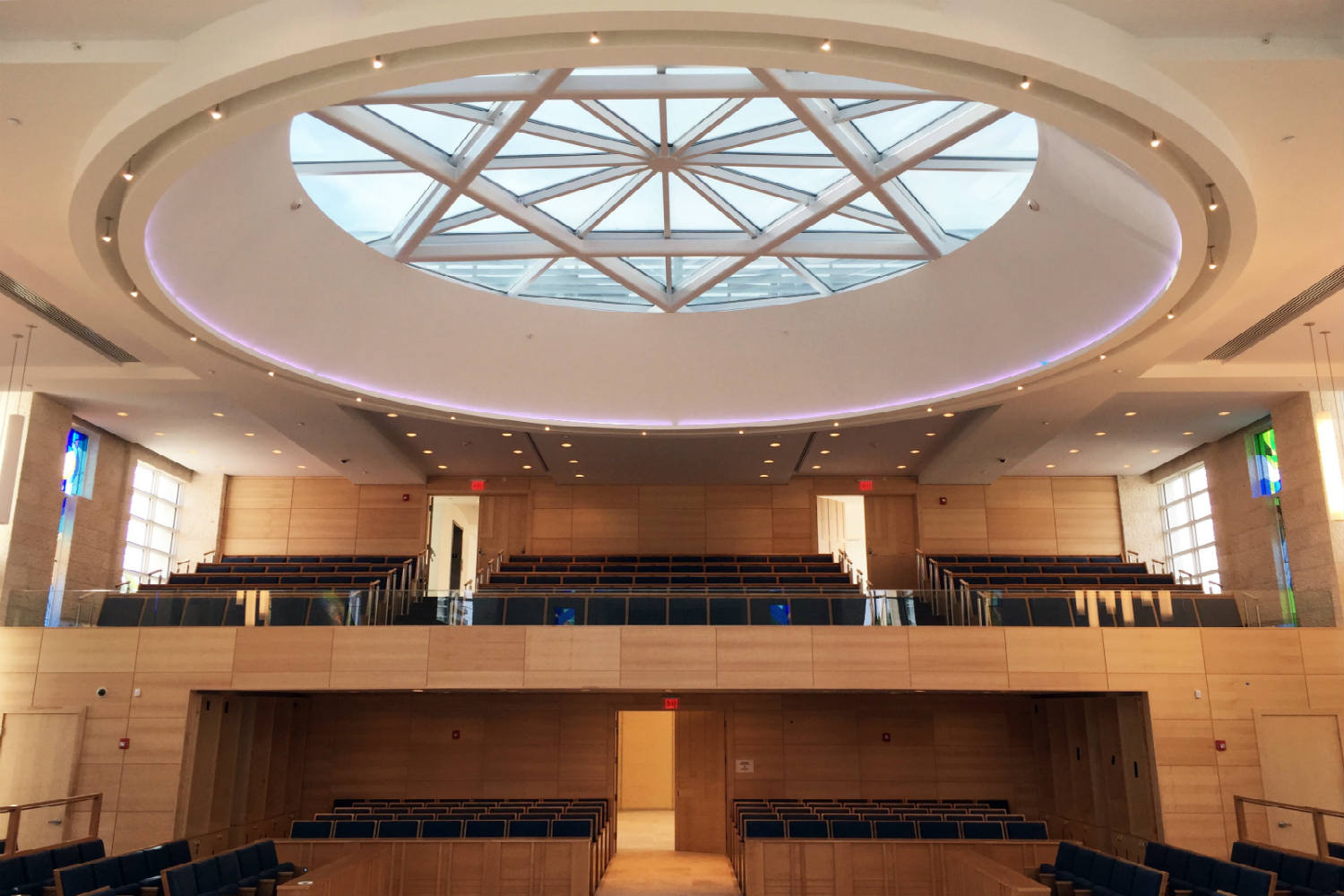 The issue of overall quietness was equally important to that of achieving the highest quality speech intelligibility at Miami’s Lubavitch Aventura South Synagogue. Images courtesy of WSDG.

Modern technology offers a host of high-tech options for perfecting speech intelligibility and fine-tuning acoustic clarity. But, what can an architect/acoustician do when ancient religious dictums preclude the use of contemporary technology? WSDG faced that challenging situation recently when engaged to design the acoustics for two new Miami-area synagogues. In keeping with Orthodox Jewish tradition, congregations are not permitted to employ electronic sound reinforcement or amplification technology in their temples. So WSDG looked to traditional architectural acoustic options to serve the critical necessity of ensuring acceptable levels of speech intelligibility.

When the Lubavitch Aventura South Synagogue began planning a new Shul to accommodate its growing congregation, Rabbi Mendel Rosenfeld and an executive committee led by a successful relator, Morris J. Kaplan, reached out to local Miami architect Schapiro Associates for an appropriate design. Extensive knowledge of the technological restrictions for constructing modern temples in accordance with ancient traditions inspired Schapiro to engage WSDG to address the acoustical challenges.
To compensate for contemporary amplifiers, microphones, speakers, and other electro-acoustical technology that would be unacceptable in the space, WSDG developed a program based on time-proven, physical design and site-appropriate acoustic treatments to establish an environment that would clearly project prayers, hymns and announcements from the bema.
The issue of overall quietness was equally important to that of achieving the highest quality speech intelligibility. With the congregation separated into two sections, men on the ground floor, women in the balcony, and in the face of potential traffic noise intrusion from the busy street, effective sound isolation was a principal concern. And, as is befitting any house of worship, the interior design needed to reflect a warm, pious ambiance.

Fortunately, WSDG was engaged at the project’s pre-construction stage. This early involvement enabled the firm to address acoustic challenges at the design phase with the aid of advanced quasi-realistic 3D acoustic modeling and auralization programs.
These sophisticated tools produced a series of precisely detailed interior space simulations. Guided by these «auditory maps,» WSDG’s acousticians developed a comprehensive construction plan to eliminate potentially audible reflection issues and to enhance speech intelligibility by implementing effective technical interior design elements. WSDG representatives note that this process is a far more cost- and time-effective method than correcting errors discovered after construction has been completed.
Precise geometrical calculations and ray tracing algorithms determined the optimal configuration of walls, ceiling height and related fixed construction components. Reflective acoustic issues were resolved with the aid of recently developed “invisible” construction elements such as aesthetically pleasing micro-perforated wooden wall diffusers and highly effective absorptive plaster. Yet, traditional and time-proven treatments were engaged, as well. Porous Jerusalem Stone used in the project, for example, has been used in temple construction for centuries, and it continues to serve as a beautiful and acoustically effective sound modulating resource to this day. 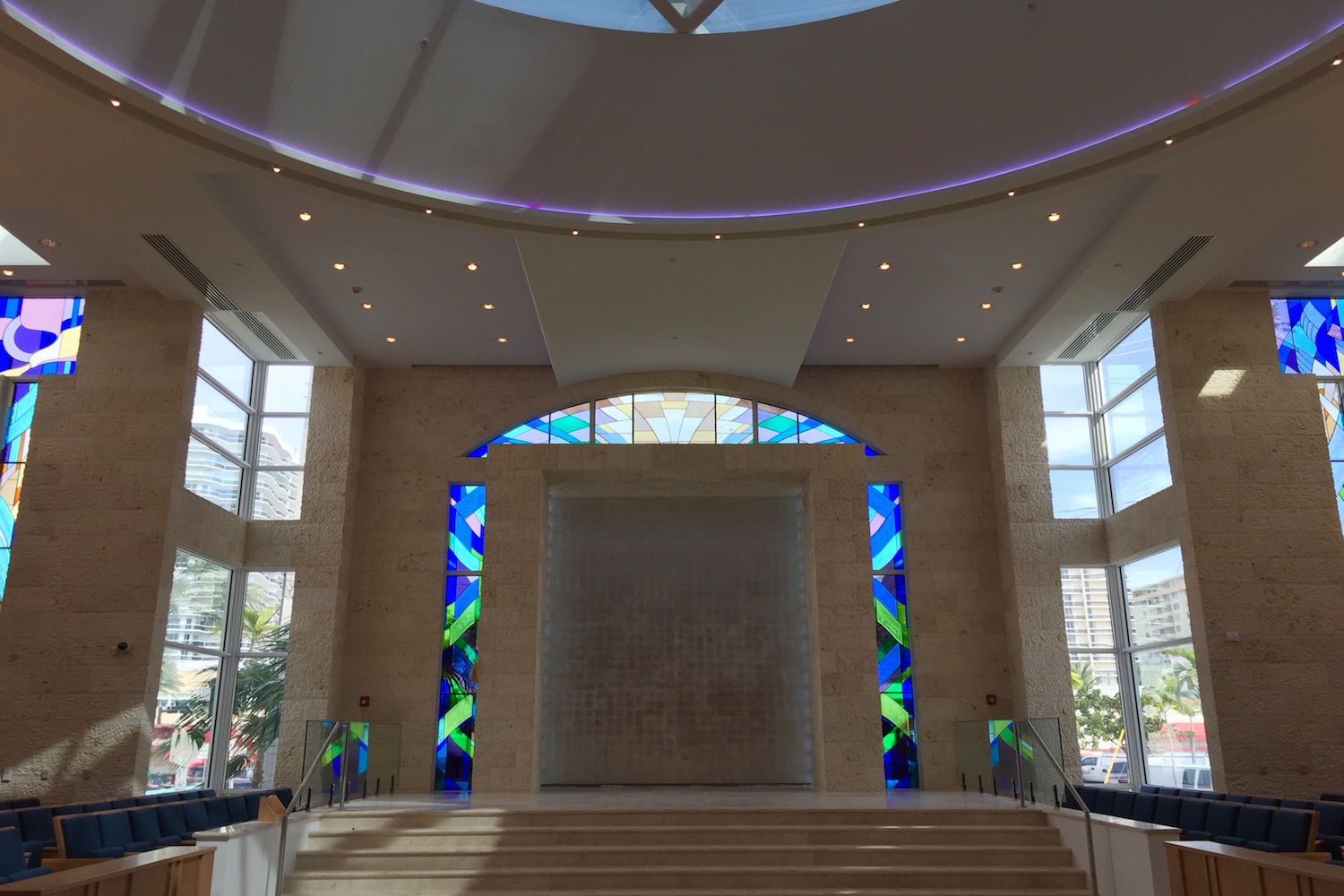 The acoustical simulations for the project were handled in a three-step process:
1- In step one, the space was translated from the architectural information (drawings and measured dimensions) to a so-called “model” — a three-dimensional representation of architecture in the digital domain.
2- In step two, the model was outfitted with acoustical surfaces. Basically, every surface of the model (walls, floor, ceiling, and also furniture, curtains, installed acoustical materials, etc.) had to be assigned specific acoustical properties.
3- Step three is the fun part, according to WSDG reps. At this point, its team performed virtual acoustical measurements in the model and, guided by the results, reached decisions to modify some architectural parameters or acoustical surfaces determined in steps one and two to improve acoustical results.
A detailed description of the model from the words of WSDG designers follows:

As mentioned above, defining the model means the translation of three-dimensional architectural information to the virtual domain. On this base, the model was designed inside the simulation software in a wireframe or “skeleton” image – this was achieved by entering coordinates of all relevant corners and then relating every corner to every other corner it is aligned with, thereby defining wall planes, ceiling planes and so forth. Due to the complexity of the space, we had to detail every critical surface, which required more calculation time in the simulation process but gave us a good and reliable model.

After we created a bare wireframe model, we had to «dress» it. In the acoustical simulation world, this means defining the acoustical properties of all surfaces. The two measures that need definition are the Absorption Coefficient (called “Alpha”) and the Diffusion Coefficient (called “Delta”). Alpha describes a material’s ability to absorb acoustical energy. Absorption is the transformation of energy from acoustical form to a different energy form (usually heat). An absorber is a material that has a significantly high Alpha in a certain frequency range, hence “high frequency absorber” or “low frequency absorber.” If sound energy is shot towards an absorber, less comes back than has gone in, in certain frequencies. Delta describes a material’s ability to diffuse sound. Diffusion is the spreading of acoustical energy over space and time, much as direct sunlight is diffused in frosted glass.
Most standard construction materials (such as wood, concrete or gypsum) were preprogrammed in the simulation software’s materials database and Alphas and Deltas could therefore be assigned fairly easily. More complex or rare materials (such as a custom slatted wood panels etc.) needed to be calculated for its acoustical properties. The accuracy of the downstream calculation data is heavily dependent on the accuracy of the Alpha and Delta values. Imagine an entire ceiling having a wrong absorption coefficient – this has enormous consequences on decisions down the line and will lead to dramatic acoustical problems when the venue is built.
Vice versa, if acoustical shortcomings are observed downstream, a modification of some acoustical properties, e.g., replacing a gypsum wall with a slotted wood wall, may obtain a better acoustical result. Welcome to the beauty and power of virtual prototyping in acoustical simulation software.

After steps one and two were finished, we had a model, which was geometrically and acoustically finalized for the time being. However, it was still a “silent” model that needed some sound to really peek our interest. Sound sources can be a multitude of things, such as humans, or loudspeakers, or instruments. In this particular project the use of loudspeakers was not an option so we moved forward just using human speech Our simulation program allows us to select the exact source, such as a voice recording, preferably captured in an anechoic environment (with no acoustic influence) that can be properly embedded in the model. The definition of the human speakers, their positioning and their orientation was the key for the design. Once we had that set, we could then position the listener, in the space. The beauty of this process is that we could hop from one seat to the next, and change our location from the very first row to the far back of the room, with just a few simple mouse clicks.
A number of acoustical tests were performed in the virtual prototype, such as the study of decay of sound in the space. Another example was the study of speech intelligibility that helped designers understand the efficiency of the applied materialization and allowed them to fine-tune the acoustical solutions.

Acoustical simulation and auralization techniques offer invaluable insight into a built or non-built environment acoustical characteristics and behavior and, consequently, help to inform architectural decisions on principal layout, buildout, materialization and electro acoustical equipment positions and specifications (when/if applicable). Various buildout options can be tested, weighed and easily demonstrated by utilizing resulting graphs and sound files that can be created and replayed as if the listener is sitting inside the modeled (unbuilt) room in question. At a fraction of the cost of any even just moderately complex constructional modification, this purely virtual simulation technique is therefore to be recommended for almost any design and construction project of even minimal acoustical functionality, the WSDG team reports.
Simultaneous to WSDG’s work on the Lubavitch Aventura South Synagogue, Schapiro and Kaplan brought in the WSDG team to design the acoustics for Miami’s Young Israel Temple, which was also planning a new shul. Once again the combination of 3D modeling programs, extensive applications of micro-perforated wooden diffusers, absorptive plaster, and Jerusalem Stone were combined with architectural design elements — such as subtle shaping and positioning of walls and angling the balcony — to better direct the sound of prayers and chants to listener ears.
WSDG also engaged acoustically designed seat cushions with built-in low frequency treatments to reduce sound reflection. The shul’s dramatic glass dome plays as important an acoustic role as its aesthetic contribution. As the sounds of the services project from the bema they expand and rise towards the dome, where they are naturally filtered and returned to the congregation in what’s described as a «heavenly diffusion.»