KINGSTON, NY — 78 year-old Hudson Valley radio stalwart WKNY announced a dramatic move in December of 2017: the acquisition of a vacant historic building in downtown Kingston, NY as the future site of the new studios and offices for Radio Kingston Corp. ​ Today, functioning smoothly and efficiently in their new home, WKNY serves its Kingston community with varied programming of eclectic music and entertaining, informative talk shows in English and Spanish reflecting the needs of the people and the city they serve. 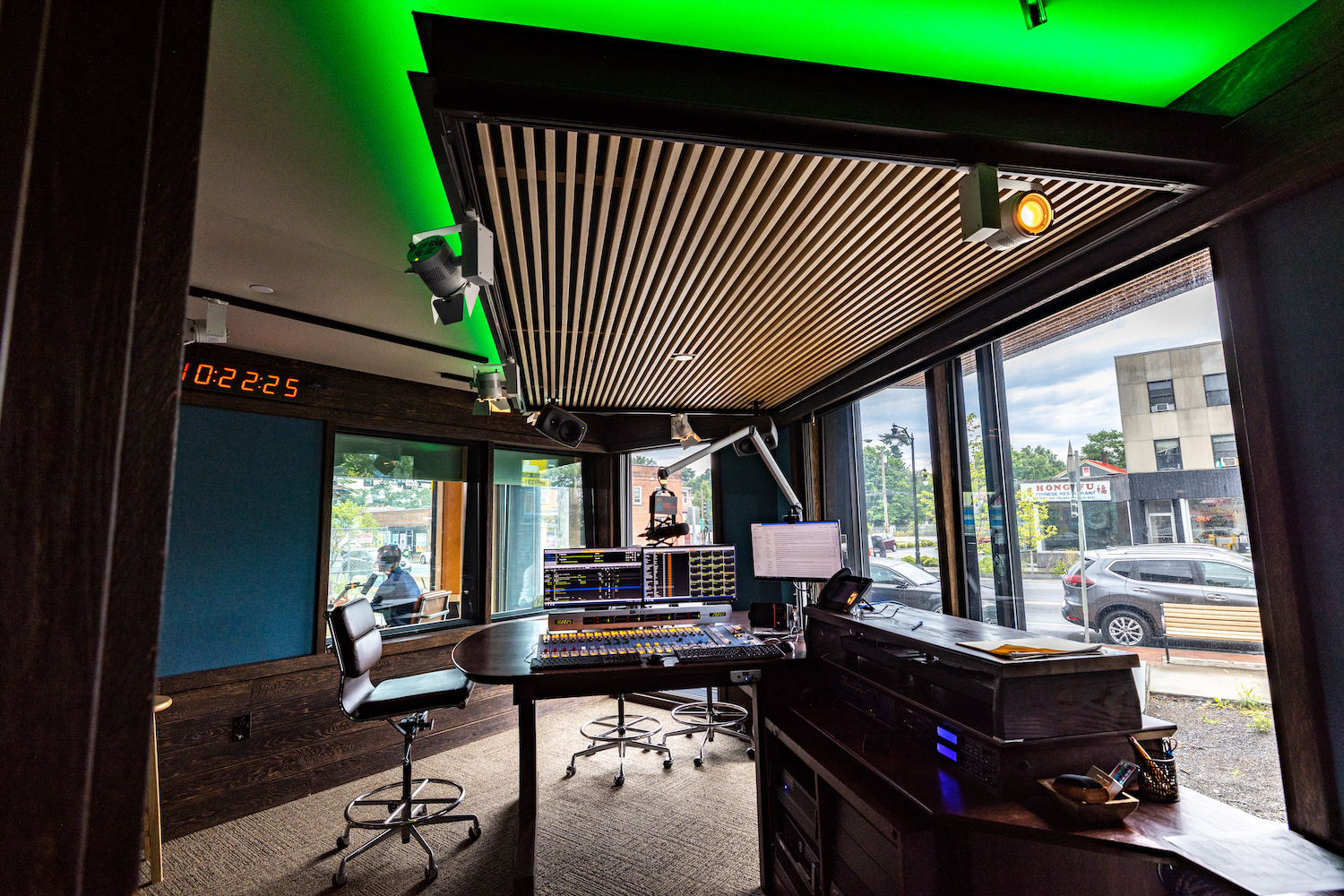 Totally reimagined, gut renovated, and outfitted with every conceivable 21st Century technological advantage, the building was completed in June 2021 and broadcast operations began there in July 2021. “One of the reasons we wanted this space was the super-sized windows facing Broadway. We imagined people seeing us and us seeing them while we made radio for our city and it was quickly apparent that concept had been turned into reality when we started working in the new studios,” said Jimmy Buff, executive director of Radio Kingston.

The octagonal Bonesteel House was built in 1855 at 693 Broadway just across the street from the station’s longtime location at 718. Working with global architectural/acoustic design/systems integration firm (and Hudson Valley neighbors) WSDG (Walters-Storyk Design Group) the building was re-conceived to be as advanced as possible, with audio/video and energy systems developed to carry the community radio station’s content to Kingston’s 24,000+ residents. Originally a private residence, the building passed into commercial use sometime in the 1900’s. “Making the place structurally sound not only for the purposes of containing a radio station but also for its historic value was paramount for us,” Buff said. 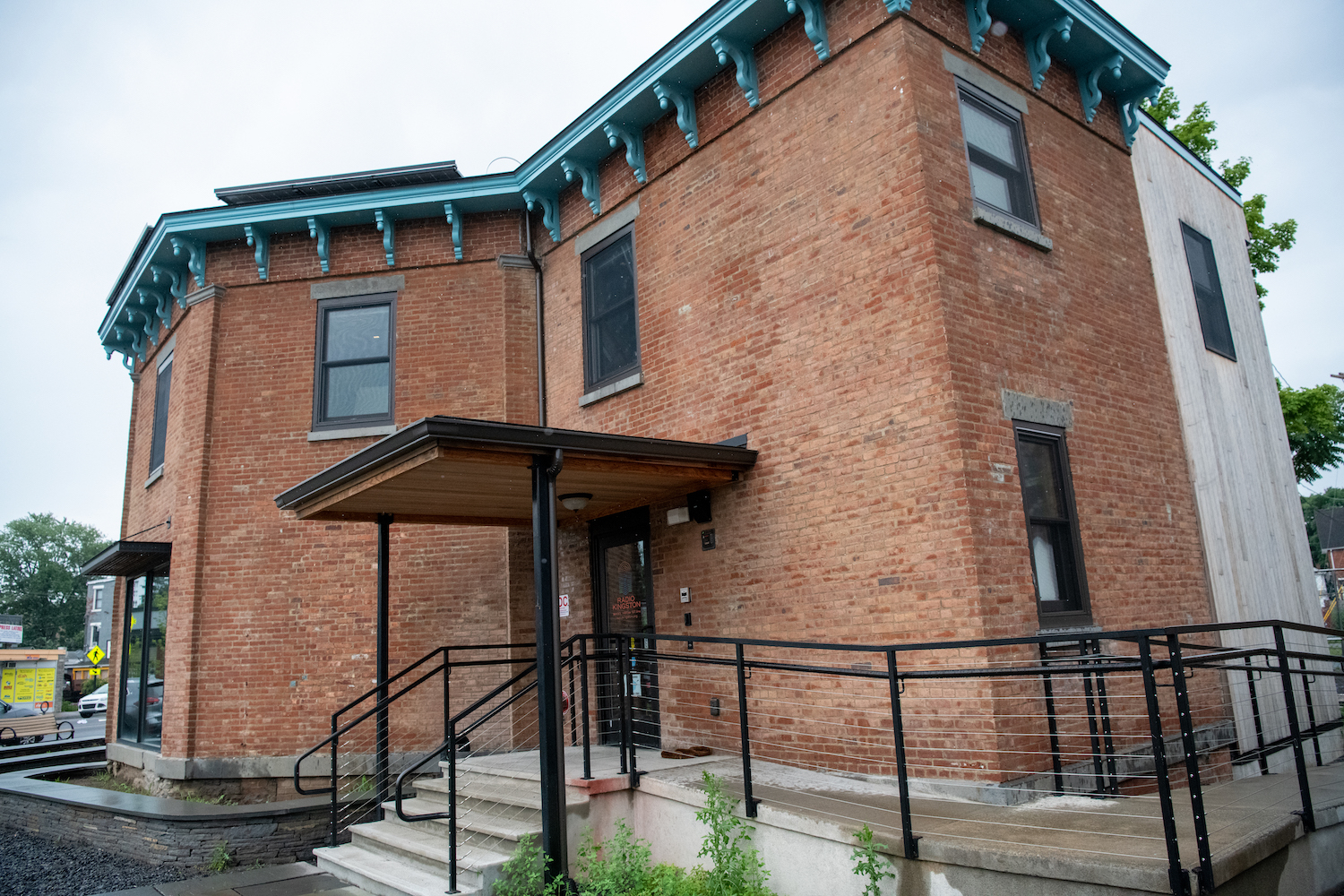 Another goal of Radio Kingston’s was to keep as much of its resources in the community as possible. ​ The Radio Kingston staff knew architect/acoustician John Storyk and WSDG, by reputation and personally. While WSDG is worldwide in scope, Storyk and the WSDG team were just down the road in Highland, NY and have kept involved with a variety of recent high-profile local projects as well.

“During our initial meeting we walked through the Bonesteel House (vacant for several years at that point,) and found ourselves pretty much on the same page in all the key areas and agreed to work together on the design with WSDG,” said Buff. ​ “By optimizing the entire existing 910 SF earmarked for the first-floor studios,  WSDG developed an ‘open space’ on the second floor encompassing offices, including a conference room and kitchen.” 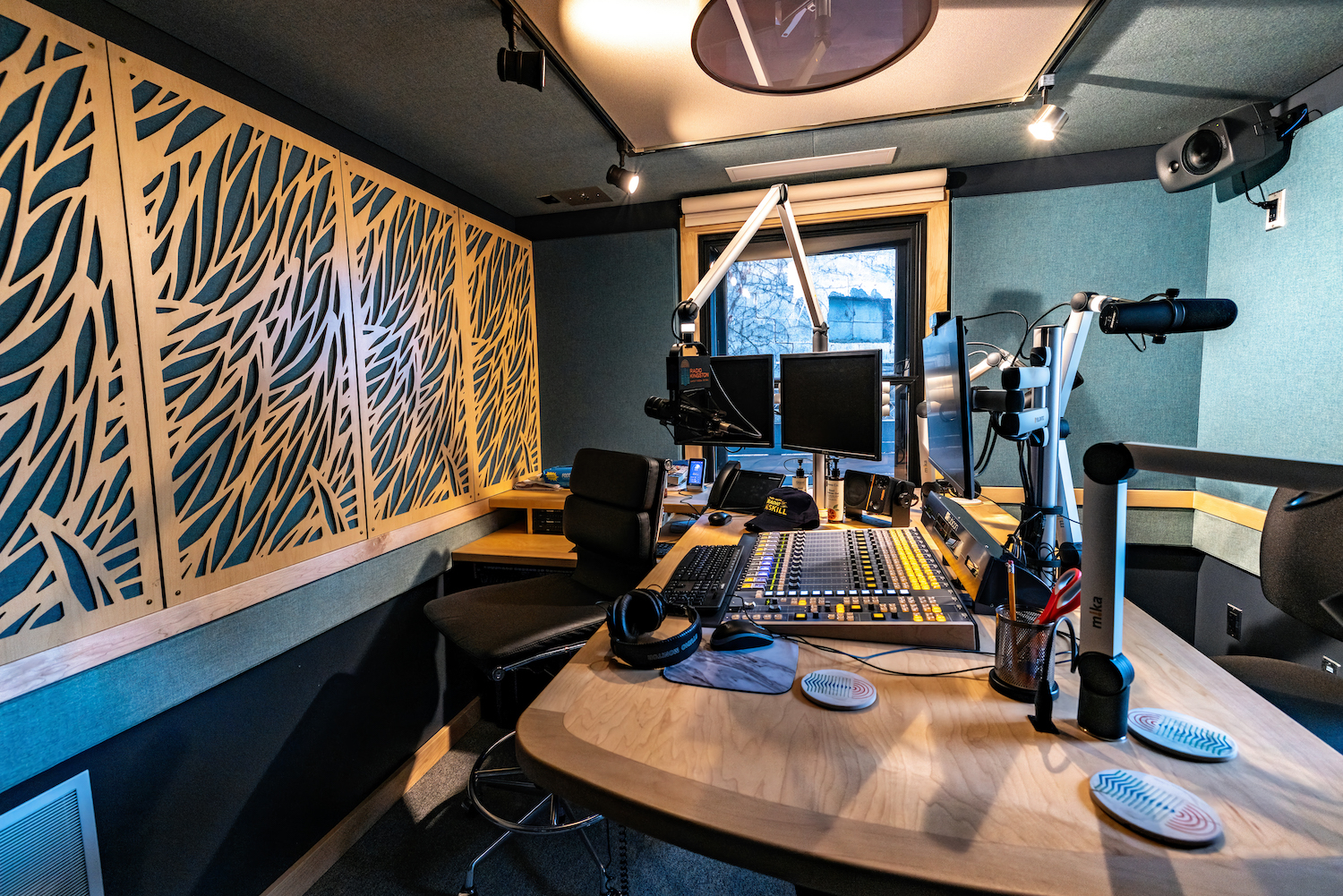 “Radio Kingston’s new studios utilized an “adapt and reuse” approach to repurposing the original two-story octagon building,” explained WSDG Partner/Project Manager, Matthew Ballos. “The building had excellent bones, but its unusual eight-sided configuration and center-floor fireplace/chimney presented a considerable challenge to space optimization.  Fortunately, a close inspection of the fireplace assured us that the chimney had no structural significance. This welcome news enabled us to remove it entirely and provided open space to house a 250 SF On-Air/Live Studio,160 SF Talk Studio, 75 SF Talk Studio Control Room, and a 100 SF Production Room.  We also added a third floor-to-ceiling window and replaced all that glass with double-paned soundproof material,” Ballos adds. “The sound – or lack of – inside the studios is like nothing I’ve ever experienced”, said Buff. “There was major road construction just outside the studios last year when we moved and while you could feel it – the ground literally shook – you couldn’t hear it,” Buff said.

“Radio Kingston, Director of Finance & Administration, Kristen Thorne was a valuable asset to our interior design program as well,” Ballos added.  “A talented interior designer, she worked closely with us on color trim, flooring, and interior design decisions. This was a truly collaborative effort.” 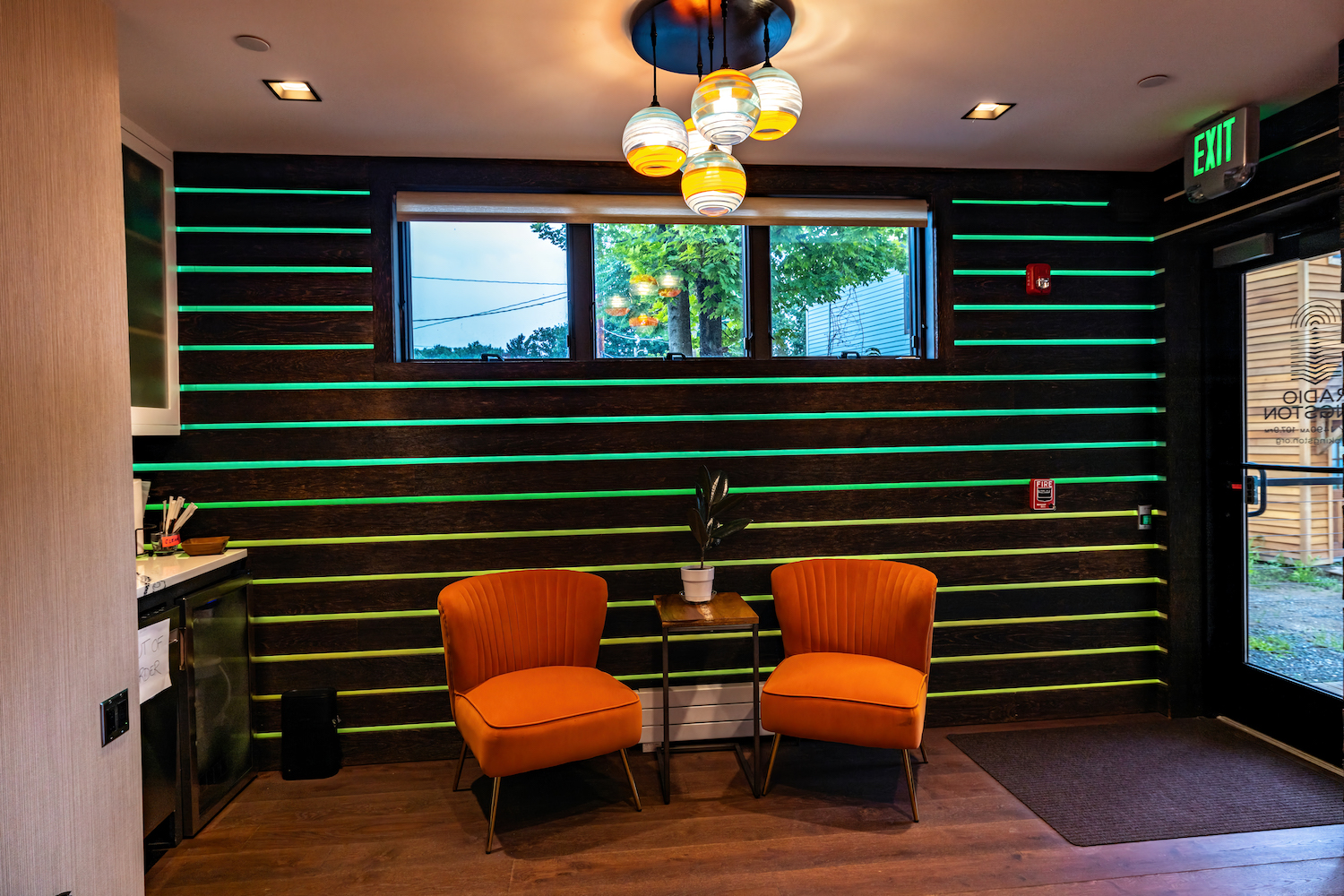 Equally important to aesthetics and studio functionality was the infrastructure to keep the station on the air no matter what. As a result, WKNY features a comprehensive rooftop solar panel installation, backed up by three Tesla Powerwall batteries, and is linked to an off-site community solar farm as well as the local power grid. Radio Kingston’s Technical Director Kale Kaposhilin was an integral part of that design, also working closing with WSDG’s team of mechanical engineers to ensure a robust system with significant backup was established.

“Our commitment to energy resiliency proved essential during a February 2022 ice storm that knocked out a wide swath of power and cable lines in the City of Kingston and surrounding Ulster County,” Buff adds.  “Two thirds  of the  homes and businesses were without heat, power and Internet connectivity for days.  But we remained on-air throughout the blackout and helped local officials communicate important information to our neighbors here in Kingston. That connection is essential to our mission. Having just celebrated our first anniversary in the space, we can attest to theory becoming reality and thank our partners at WSDG for sharing our vision,” Buff said.

WKNY went on the air in December 1939 and will celebrate 83 years continuously on the air in Kingston NY in December 2022. Radio Kingston Corp purchased WKNY in October 2017 and will mark its 5th anniversary this fall. Currently, the station hosts over 50 community-based shows, including legacy programs and hosts like Warren Lawrence, who will celebrates fifty years at WKNY in March 2023. Radio Kingston also added the first ever daily Spanish language programs in Kingston history.
​
​Radio Kingston is wholly supported by the NoVo Foundation. Established in 2006 by Peter and Jennifer Buffett, the NoVo Foundation supports initiatives that promote a holistic, interconnected and healing vision for humanity. Click here for full NoVo story.

“As a global company we recently completed Rue Boyer, a World Class “Destination Studio” in Paris, Sonic Den, a high-end studio in Mexico and, a major new “Production Campus” for Spotify in Los Angeles. As Ulster County residents for 40+ years, we provide architectural and acoustic solutions for many local public service projects,” said WSDG founding partner, John Storyk. “These assignments ​ range from improving speech intelligibility for the Cornell Boathouse at Marist College and The Art Effect’s Trolley Barn Exhibition/ Event space, in Poughkeepsie to solving a major acoustic problem for the Dutchess County SPCA in Hyde Park.  We’re loyal fans of WKNY Radio Kingston and were very pleased with the opportunity to apply our skills to reimagining an historic octagonal building as a 21st Century Broadcast Center,” Storyk concludes.