By Dan Daley, Special to AVIXA

Adjacent to a large convention center, La Cigale, one of Doha’s newest luxury hotels, presents its guests with a wealth of colors, textures, and creature comforts. Interiors are graced by Murano chandeliers, with furnishings courtesy of Edra, Philippe Starck and Carlos Cruz-Díez. Views from the top floors of the 19-story building sweep the cobalt day and nighttime star field sky above the desert surrounding this oil-rich city. With 189 rooms, 36 suites, a fitness center spa, indoor pool, restaurants and related amenities, this one-of-a kind showplace seemed to have anticipated the needs of virtually every guest.

What it wasn’t expecting was the hotel’s sleek lounges — the Madison Piano Bar and the Sky View — nearly turning into a theme-park ride.

Just prior to its formal opening, guests invited to a preview evening were rattled by a surprising acoustic anomaly. As the performance began, the installed sound system immersed the room with music so abrasively loud that the walls began vibrating, and the guests were driven out by an intense tsunami of decibels. As the hotel management quickly discovered, while no expense had been spared to ensure the most tasteful and attractive surroundings, the contractor engaged to build the room was alarmingly lacking in acoustic expertise. 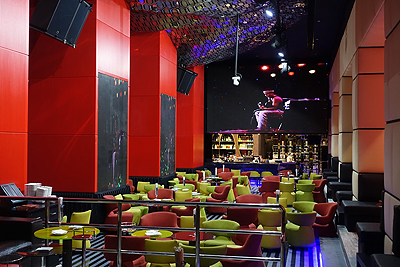 Both of the lounge spaces turned out to be acoustical sieves — what Sergio Molho, a principal in the Walters-Storyk Design Group (WSDG), the New York-based acoustical and design consultancy the hotel hired, described as “very, very weak containers, in terms of sound isolation — they were very vulnerable to both airborne and structure-borne noise.”

Molho, who operates from Miami, says the clubs’ sound-system speakers had been attached directly to key structural points in the building. That mechanical coupling was sending vibrations through the structure, which could be heard and felt as many as five floors away. With VIP suites directly below the club level, the vibrations were literally existential dangers for the hotel. “I mean, it’s as though they were going after the hotel’s best, highest-paying guests,” he says. “Plus, bars are some of the highest-margin areas of any hotel, so shutting them down for a period of time hurts revenues.”

Worse, the Sky View’s soaring open-arched terrace was also vulnerable to noise from the Piano Bar below it, receiving a double dose of noise from both structural and airborne sound. In fact, when WSDG’s acousticians arrived, they discovered a perfect-storm environment: issues included a compromised electroacoustic design scheme; an unsuitable sound system selection and installation; highly reflective surfaces; and a resounding lack of interior ceiling, wall, and floor isolation.

It was not the first time WSDG had encountered this type of dilemma. “Hotels naturally focus on the esthetics and the architectural engineering elements of their properties,” says Molho. “That’s understandable, because that’s what people see and can touch. But they rarely think about how these spaces sound and even less about what kinds of problems that vibrations caused by loud sound can cause. Until they find out this way.”

Precisely tracing the sources of the noise problems involved a complex measurement process, using sophisticated structural acoustic and sound isolation programs, such as EASE (Enhanced Acoustic Simulator for Engineers), a software suite that allows system designers and consultants to create detailed, realistic modeling and simulation of venue acoustics and sound system performance; and Smaart, an FFT-based software platform that displays the frequency content of signals and measures the response of electrical and electro-acoustic systems.

This combination of virtual modeling, and data measurement and analysis would provide input for three main sets of criteria for measurement:

After several days of testing and measuring, including using an accelerometer to simulate the vibration effect of low-frequency noise (to see exactly how much the walls were physically moving, which further underscores the severity of the problem), WSDG’s recommendation called for the complete reconstruction of the Madison Piano Bar. This remedial strategy would utilize an approach familiar to anyone who’s worked in a recording studio (firm founder John Storyk designed and built Jimi Hendrix’s Electric Lady Studios in New York in 1970). Known as a “room-within-room” design, it involved construction techniques designed to decouple and isolate the areas that would generate and receive high SPL from the rest of the structure. In this case, that meant “floating” the lounge floors from the structural subfloors and disconnecting their edges from structural walls, using a variety of tools such as springs and flexible materials, with the end goal of eliminating or minimizing direct connections between the club spaces and the rest of the hotel, as well as containing nightclub-level loudness within the club and eliminating sound leakage to adjacent rooms.

After the reconstruction took place, the same measurement systems were brought back in, to compare the differences in dB between before and after. According to Molho, the initial readings in the suites adjacent to the entertainment areas had been reduced by about half: The NC 55 value (the amount of noise transmitted through barriers) had been cut to NC 28, and the FSTC 45 value (the measurement of the space’s resistance to sound intrusion) had been doubled to +>70.

“The initial readings clearly indicated that the sound barriers in place were not enough to contain the 110 db generated by the sound system of the Piano Bar,” he says. “We achieved NC 28, which is about the same level as the venue’s HVAC noise level. And as important, there was no low-frequency leakage after we implemented the isolation solution.”

Today club-goers can converse and enjoy music at comfortable levels, and guests in neighboring suites can sleep without audible intrusion. “It’s a lot less complicated and expensive to address this during construction than to have to shut down the bar to fix it later,” says Molho. “It’s a problem that we see often in the hospitality business. Consulting an acoustician during the design phase is like going to the doctor for a check-up before you go on a trip. When they call us with the problem after they open, they’re calling for an ambulance.”