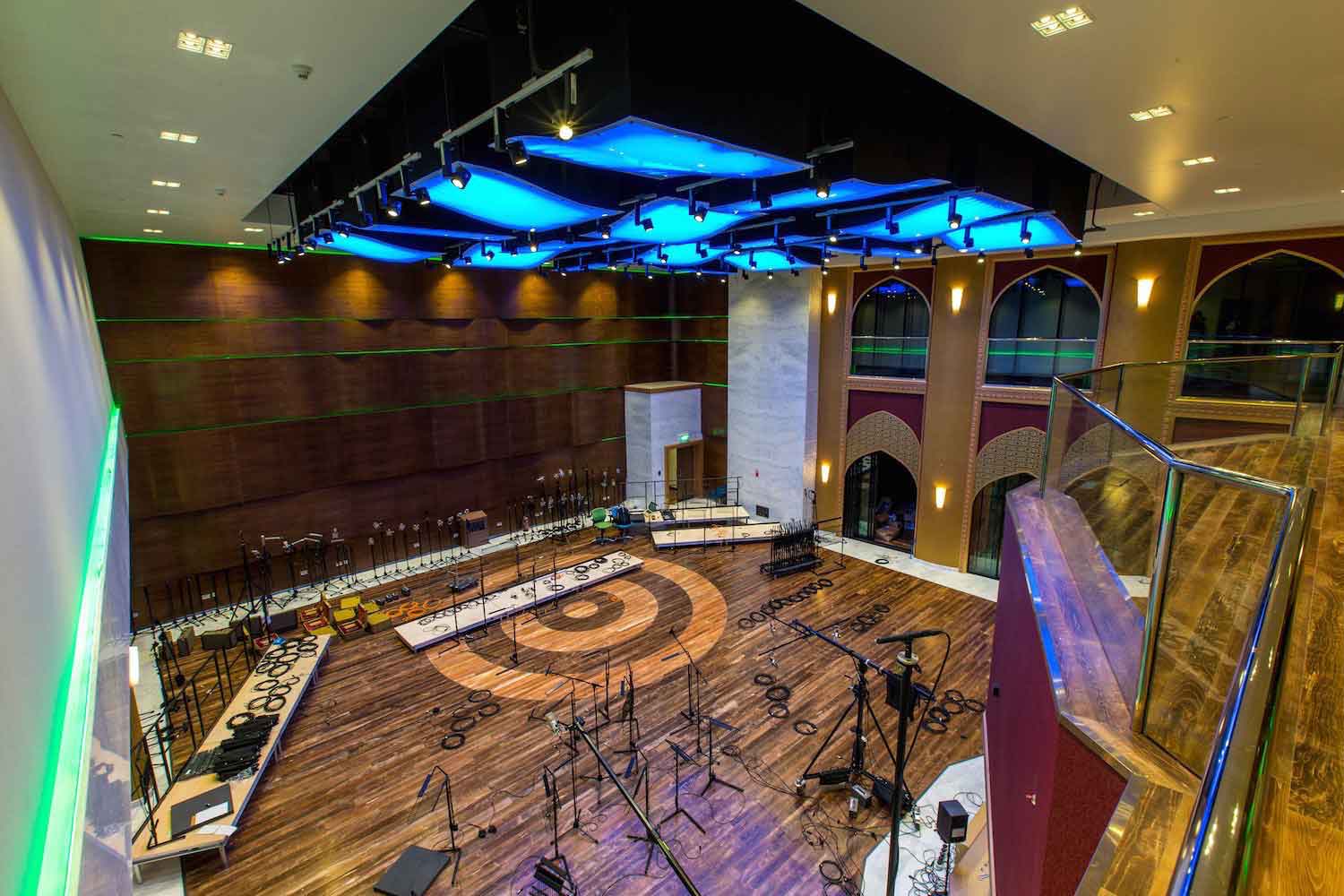 The 6,000-sq-m compound was commissioned by The Katara Committee, with WSDG-Walters-Storyk Design Group invited onboard in 2012. WSDG was retained by Elie Wakim, head of the acoustical division of Doha-based, Imar Trading & Contracting. 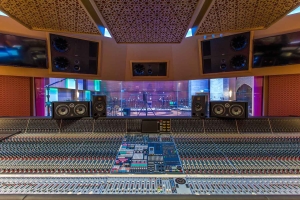 ‘The project required high-level studio and interior design, as well as a commensurate HVAC system and, expert construction oversight to monitor the complex sound isolation issues essential to critical recording and listening environments. WSDG’s international organization was ideally positioned to deliver all of these services,’ Molho adds.

The sprawling, 40-plus room complex is distinguished by Studio 1 Live (orchestral) Room, which is capable of hosting more than 80 musicians and is crowned by a 9m-high ceiling. A recording suite with acoustics, Katara Studio 1 features a 68-sq-m control room, with a 96-fader Neve 88RS mixing console and 5.1 PCM BB5 surround-sound system three spacious, multi-configurable, ISO Booths; a mezzanine level and VIP lounge to facilitate recording of indigenous and/or jazz sessions. The facility’s Studio 2 Live (rock ’n’ roll) Room is equipped with an 80-channel API Vision mixing console. Each studio has a dedicated machine room to reduce cable lengths, and each is designed to accommodate an eclectic range of clients and recording styles.

‘We were fortunate to have the opportunity to collaborate with Elie Wakim [Imar Trading & Contracting] and Metropolis on this complex project,’ Molho says. ‘Our joint effort enabled the project to be completed well within its projected ten month construction deadline.’

‘This extraordinary facility required an extremely complex acoustic programme,’ adds WSDG Project Manager, Joshua Morris. ‘The business plan was to provide Middle Eastern artists with a superb alternative to European studios and, simultaneously establish Doha as an appealing destination for international recording artists. To achieve this mandate, every effort was made to insure that each Katara Studio component met the most stringent pro audio requirements. 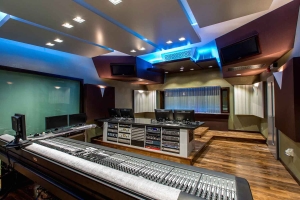 Aesthetics were a critical element of the studio plan. Elie Wakim and Katara Studios management were committed to incorporating authentic Arabic design elements throughout the complex. WSDG Co-Founder/Interior Designer, Beth Walters, and Partner/Art Director, Silvia Molho performed extensive research on Islamic and Muslim graphic arts and architecture. Studying the vibrant Arabic color palette, they developed methods to incorporate elements of intricately patterned Islamic calligraphy and mosaics, throughout the complex. Walls, floors, ceilings, and virtually every surface area represented a potential canvas. The key to the success of their interior design model was to creatively weave these classic elements within the ultra modern facility in a completely organic fashion. 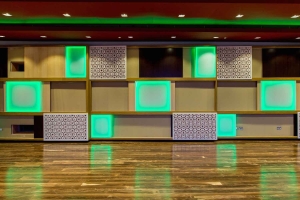 She worked closely with WSDG Spain, Project Engineer Marc Viadu to identify fabricators for these handsome, custom-built ceiling clouds. Their value as effective solutions for enhancing the live room’s acoustics was readily apparent in the final commissioning tests.

WSDG Co-Founder, John Storyk points to Katara Studios as one of the high points in the firm’s history: ‘Elements of this complex are genuinely unique,’ he says. ‘In addition to the ingenious Magic Ceiling Cubes, the Studio 1 Live Room’s three oversized Iso booths can be re-configured in a variety of permutations. They can serve as independent spaces, as one large and one small ISO, as a single large ISO or, as an extension of the Live Room, as a variable acoustic element to increase its volume and reverberation time. Additionally, their large pocketing, acoustic sliding glass doors provide complete visual contact between all three ISO Booths and the Live Room.

‘The success of this massive project is a testament to the communication skills, and consummate professionalism of Elie Wakim, Imar Trading & Contracting, Metropolis and the global WSDG team. We are extremely pleased to be associated with this significant addition to the Middle East’s audio/video production/postproduction landscape.’