By DAVID WALDSTEIN and BEN ROTHENBERGSEPT 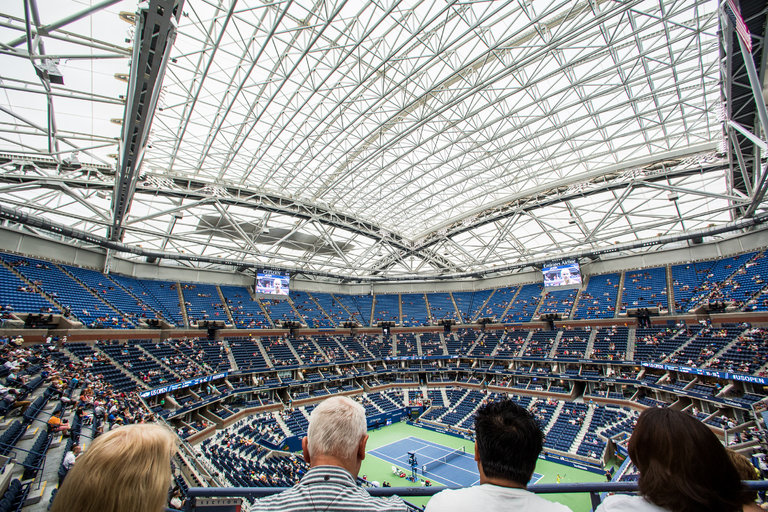 The upper reaches of Arthur Ashe Stadium, where sound reverberating off the roof can often be heard loudly and clearly on the court.

The United States Open added a new $150 million retractable roof before this year’s tournament, so fans inside Arthur Ashe Stadium no longer need umbrellas. They might, however, need earplugs.

Fans at the U.S.T.A. Billie Jean King National Tennis Center in Flushing Meadows have long been more raucous than those at the sport’s usually staid tournaments. But the retractable roof structure has produced new and unforeseen noise issues: Voices of fans in the upper reaches of Arthur Ashe Stadium, the showcase for the Open’s marquee matches, are reverberating off the roof and can be heard loudly and clearly down on the court during play.

The U.S. Open trailed behind the Australian Open and Wimbledon in adding retractable roofs to allow play to continue during rain, long a disrupter of tennis. The rain stays out now, but the noise stays in — creating an echo chamber and a much louder experience for everyone.

“Ladies and gentlemen, please, your voices are carrying to the court,” the chair umpire Eva Asderaki-Moore told the crowd Thursday night in one of her many pleas for silence.

Asderaki-Moore has had to tamp down the noise at Ashe before. During last year’s men’s final, she deftly managed a rowdy pro-Roger Federer crowd that had turned on his opponent, Novak Djokovic, the eventual champion.

But during the first week of the tournament this year, Asderaki-Moore and other umpires have needed to manage even lower-stakes matches with repeated requests for silence and stillness.

Even those announcements — and player interviews before and after matches — have been difficult to hear. The tournament that once rerouted air traffic from La Guardia Airport to create a more pastoral soundscape now has flawed acoustics. Even with the roof open, the structure still has enough reflective surface to generate cascading waves of sound.

“I didn’t feel silence at any moment,” Garbiñe Muguruza said after her second-round loss with the roof open. “It was continuously a noise. I think it’s very big, this stadium, also. It’s kind of echo. It’s just like continuously.”

Putting a cover on top of Ashe Stadium was an architectural and engineering challenge because the stadium sits on marshy land. But after years of deflecting pressure to build a roof that would prevent the almost inevitable rain delays, the United States Tennis Association relented.

But the solution to one problem has made another one more acute.

With a capacity of 23,771, Ashe Stadium can hold nearly 9,000 more people than two other showcase courts with retractable roofs: Centre Court at Wimbledon and Rod Laver Arena at the Australian Open. And the concretelike hardcourts at the U.S. Open only magnify the problem.

At most stadium sporting events, loudness is welcome, or even encouraged. At basketball arenas, football stadiums and baseball parks, video boards frequently implore, “Let’s make some noise!” In tennis, cheering is acceptable after points, but fans are expected to be quiet in the moments leading up to the action and the time during play.

Fan behavior at Ashe Stadium has always been unusual when compared with the three other Grand Slam tournaments — the Australian Open, the French Open and Wimbledon. At the hallowed ground of Centre Court at Wimbledon, talking aloud during a point would probably get fans ejected.

Francesca Castelli, a brand manager from London, said the music inside Ashe seemed louder than last year, perhaps because of the roof. But she blamed noisy fans more than the roof for the cacophony during points.

“When play is on, it’s on,” she said, “so just shut up. It’s disrespectful to the players. But I suppose when it rains, everyone will be happy that the roof is there.”

But in the upper reaches of cavernous Ashe Stadium, fans never had to worry about their chatter affecting the play on the court. It is not unusual for fans to talk on cellphones in the middle of a match without getting shushed.

There is an added dimension to the din that is unique to the Open among Grand Slam tournaments: the 90 luxury suites that circle the stadium. Their occupants, who often include celebrities and guests at corporate events, are often more interested in partying than serving-and-volleying, and the owners of the suites pay top dollar.

That most of the matches in Ashe Stadium, while star-studded, have been routs may also have driven fans to distraction.

Daniel Heischrek, a Swiss sports reporter, said he enjoyed the noisy atmosphere and even felt comfortable making a cellphone call during a match.

The increased noise presents a challenge to the television broadcaster ESPN, which employs software to learn, detect and even remove the din of sustained noises like the air ventilation system. But crowd noise is less predictable.

“You want to get the blend of what the crowd influence might be, but not to the detriment of what the package is,” said an ESPN vice president, Jamie Reynolds.

U.S.T.A. officials say it is too early to call the noise a problem.

Gordon Smith, the U.S.T.A.’s executive director, said that the players and the fans would have to adjust to the new conditions, and that although many players have commented on the noise levels, few have outwardly complained.

“The noise level in Ashe will be a discussion point after the 2016 tournament, for sure,” said Chris Widmaier, a spokesman for the U.S.T.A. “We will gather all the data and address what, if anything, needs to be done.”

Indeed, by Friday night, there were signs that fans may have already been sufficiently chastened by the umpires’ rebukes. The sound level was not quite as troublesome during Rafael Nadal’s straight-set victory over Andrey Kuznetsov, 6-1, 6-4, 6-2, though there were moments when Nadal paused for the din to subside.

John Storyk, an architect and acoustician who helped build Jimi Hendrix’s Electric Lady Studio in Manhattan in 1969, is an expert on noise control in venues large and small. His company, Walter Storyk Design Group, helped fashion the acoustic atmosphere at three venues at the Rio Olympics, including the Maracanã stadium. He said there were steps that could still be taken to dampen or absorb sound.

He has not seen the new roof and stressed that he did not know the specifics of the situation. But in general, he said, the first step would be to take measurements of what is happening when the roof is open and when it is closed, with people inside the stadium and when it is empty.

“Once you have the data, then comes the art,” he said. “You have to determine how much absorptive material and where to put it.”