You May Not Know Jack Antonoff. But You Probably Love His Music. 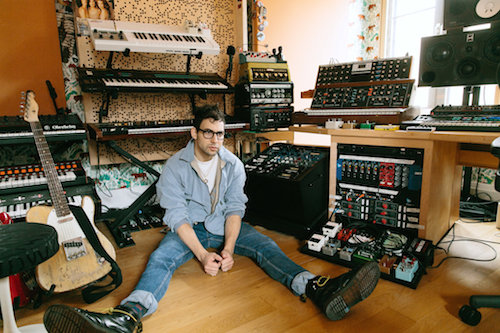 The producer and songwriter Jack Antonoff at his home studio in Brooklyn. The album “Gone Now” from his band, Bleachers, is out in June. Credit Tawni Bannister for The New York Times

The first time Jack Antonoff hit it big — more than a decade after he began touring as a teenager in crowded vans that often arrived at empty rooms — he walked away.

The band Fun. had started as a side project for Mr. Antonoff, a chronic multitasker. But by 2012, after placements in “Glee” and a Super Bowl ad sent the group’s song “We Are Young” into the stratosphere, Mr. Antonoff found himself experiencing “truly inhumane, goofy, ‘Almost Famous’-level” success, he recalled. Suddenly a platinum-selling act, Fun. toured arenas around the world and won Grammys for song of the year and best new artist. Then the band declined to make another album.

But his aversion wasn’t to stardom, or even the burden of a megahit, which he still openly chases as a go-to producer and songwriter for those on the pop A-list, like Lorde and Taylor Swift. The problem was that Fun. was merely something Mr. Antonoff was a part of, he explained recently at his home studio in Brooklyn; he needed the music he made to be a part of him.

Born of that borderline self

-sabotaging earnestness was the band Bleachers, an intensely personal project that Mr. Antonoff, 33, has put at the center of his life ever since; “Gone Now,” out Friday, June 2, via RCA, is his second album under that moniker, and it furthers his maximalist approach to anthemic, life-affirming pop-rock about loss and just how taxing it is to be a decent human being. 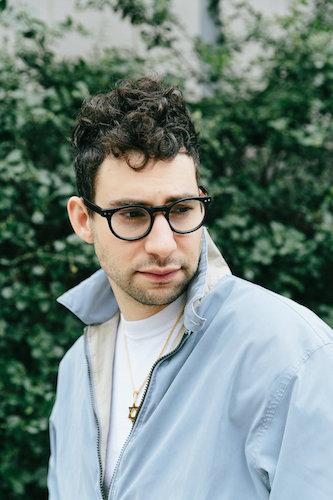 At the same time, instead of becoming a more insular musician, Mr. Antonoff has broken out as one of the most in-demand architects of modern hits — an insider’s outsider who has used his punk essence and idiosyncratic approach to forge a distinct lane of his own. He proved himself with smashes like Sara Bareilles’s “Brave” and Ms. Swift’s “Out of the Woods” and “I Don’t Wanna Live Forever” (with Zayn Malik), and helped to usher in a strain of ’80s pop revivalism. In the process, he has gone from industry curio to known quantity and artist’s favorite, especially among female musicians.

“Sometimes he sits at the piano and we both just start ad-libbing and the song seems to create itself,” Ms. Swift said in an email, citing Mr. Antonoff’s musical versatility. “His excitement and exuberance about writing songs is contagious.” She added: “He’s an absolute joy. That’s why everyone loves him. I personally wouldn’t trust someone who didn’t.”

On top of Bleachers comes the release next month of Lorde’s “Melodrama,”for which Mr. Antonoff served as a producer, along with the singer, moving toward his goal of collaborating on complete albums instead of individual tracks. Jumping easily between worlds, he is working on new music by the cult singer and guitarist St. Vincent, and logging recording time with Pink, Carly Rae Jepsen and the Killers.

“It’s weird to know you’re in a moment,” Mr. Antonoff said. “It’s not as black and white as just success or charts — you feel it when you’re in the studio.”

For Mr. Antonoff, that typically means a small room crammed with synthesizers and adorned with magazine clippings (“The Women of Twin Peaks”) in the Brooklyn Heights apartment he shares with his girlfriend, the writer, director and actress Lena Dunham. While much of the hit-making industry is based in Los Angeles, Mr. Antonoff, who also has a home there, prefers to keep a remove from the pop machine when creating.

“The heart and soul of pop is newness, excitement, innovation,” said Mr. Antonoff, a spirited, zealous talker who rarely stops fidgeting. “The music industry is built on chasing that ambulance — ‘someone did it, let’s go that way.’ I don’t want to be a part of that. I want to be away from it.”

After bringing artists into his modest space, he likes to start with a simple question: “What’s the worst thing that’s ever happened to you?”

In contrast with the cold, near-scientific approach to songwriting favored by titans like Max Martin and Dr. Luke, Mr. Antonoff strives for a gut-level, emotionally probing therapy experience — “excavating,” he calls it. “If someone could do it without me, then I don’t want to be there,” he said, recalling an unsuccessful experience trying to write for Rihanna, who often pulls from large pools of competitive talent.

Mr. Antonoff’s work stems from intimacy. He cited “Liability,” a new piano ballad by Lorde that the pair recently performed on “Saturday Night Live,” about “what it means to become a famous person.” The song came from a conversation about how Lorde’s life had changed after her breakout debut, and it is devastating.

If empathy is Mr. Antonoff’s songwriting superpower, then he has a fitting, tragic origin story. “I watched my sister die, and it changed me forever,” he said. Mr. Antonoff was 18, a high school student in Manhattan; his sister Sarah, 13, had brain cancer. Her death followed the Sept. 11 attacks, and for Mr. Antonoff, touring became a form of escape.

The memory of his sister is in many ways the engine of Bleachers, a band that is entirely premised on human connection. “I felt so compelled to tell that story,” Mr. Antonoff said. “It’s what makes me feel like I have a reason to live.”

A true believer in the purpose, weight and potential of music and fandom — even, or especially, at the mainstream level — Mr. Antonoff has built Bleachers as a bottomless text that rewards the obsessive, completist mentality he had toward bands like the Beatles and Green Day as a child growing up in suburban New Jersey.

Stuffed with allusions and Easter eggs for close listeners, Bleachers’ songs are “supposed to sound like a person going crazy in a room alone — that’s what it is,” said Mr. Antonoff, who is consistently self-deprecating about his pileup of neuroses.

But while the first Bleachers release, “Strange Desire,” was more like a stream-of-consciousness diary, written in hotel rooms while Mr. Antonoff was on the Fun. roller coaster, “Gone Now” — “a giant apology to everyone who knows me” — pulls from his past while imagining a future with less baggage.

“There’s only so much you can carry with you,” Mr. Antonoff said. “How do you move on as the person that you’ve worked your whole life to be and also leave space to create something else in there?”

Building on the success of shout-along songs like “I Wanna Get Better,” which was a hit on alternative radio, Bleachers’ new music proudly sounds like New Jersey, which is to say like highways and late-night diners and, of course, Bruce Springsteen (especially “Everybody Lost Somebody,” with its sticky saxophone riff). Mr. Antonoff borrows liberally from his touchstones, dipping into different decades — from the Zombies to Electric Light Orchestra to Fine Young Cannibals — for a collage of parts that sound, by design, straight out of a John Hughes film.

Ostensibly a one-man band, Bleachers is also a group effort that revolves around Mr. Antonoff’s reputation as a collaborator without boundaries. “Gone Now” is packed with guests both predictable and not, with background vocals from Lorde, Ms. Jepsen and Ms. Dunham and additional production by Greg Kurstin (Adele), Sounwave (Kendrick Lamar), Nineteen85 (Drake) and Organized Noize (Outkast). 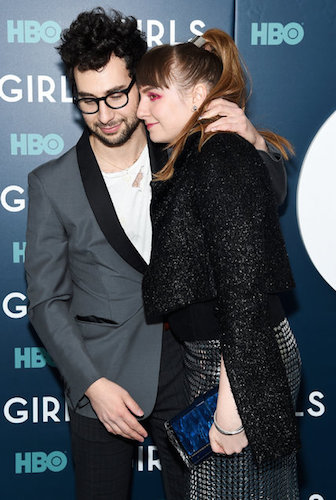 It’s a combination of plain ambition and a commitment to a bespoke quality that links Mr. Antonoff’s work for himself and others.

“He wanted to be the biggest and the coolest,” Tyler Childs, Mr. Antonoff’s manager, recalled of the period after “We Are Young,” when pop doors were just starting to open. Mr. Childs credits Mr. Antonoff with “moving the radio toward him,” with songs that have a personal touch — and pretty much never a carefree attitude — but do not sacrifice any bigness in sound.

Mr. Antonoff knows he is “straddling a lot of fences,” merging an indie ethos and megastar associations. But “the whole goal is impact,” he said. “I love connected culture. You can say forget it,” he continued, using stronger language, “and go into your corner of the sandbox, or you can try to make a difference” on a wide scale.

He is also fixated on using his resources in honorable, inventive ways. For “Gone Now,” that meant executing his most quixotic idea to date: removing his teenage bedroom — where he lived until he was 27 — from his parents’ home, replicating it exactly in a trailer and taking it on tour. It’s part art installation, part interactive listening parlor, Mr. Antonoff explained, so fans can hear the album “where it was most inspired in the first place.”

“They can be there, touch things, feel the work where my heart and soul is,” he said, happily admitting that the project has been “financially crippling.”

Earlier this month, on a trip to check the progress for the first time, Mr. Antonoff was giddy as he approached the disembodied room, which from the outside resembled a Monopoly hotel. 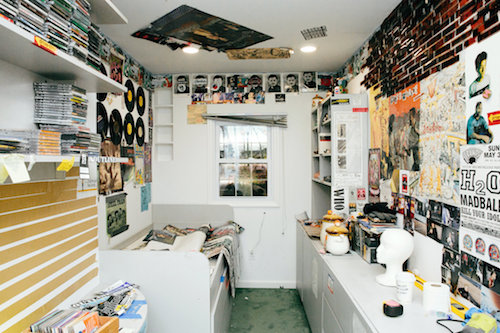 Jack Antonoff’s teenage bedroom was replicated in a trailer to take on tour. Credit Tawni Bannister for The New York Times

A crew of up to seven people from the company All Valley Yacht Club had been working every day for about two weeks on the transfer, taking almost everything from the cluttered inside space, including wall-to-wall stickers, cutouts, clothes, CDs, the carpet and other ephemera, and placing it back where it