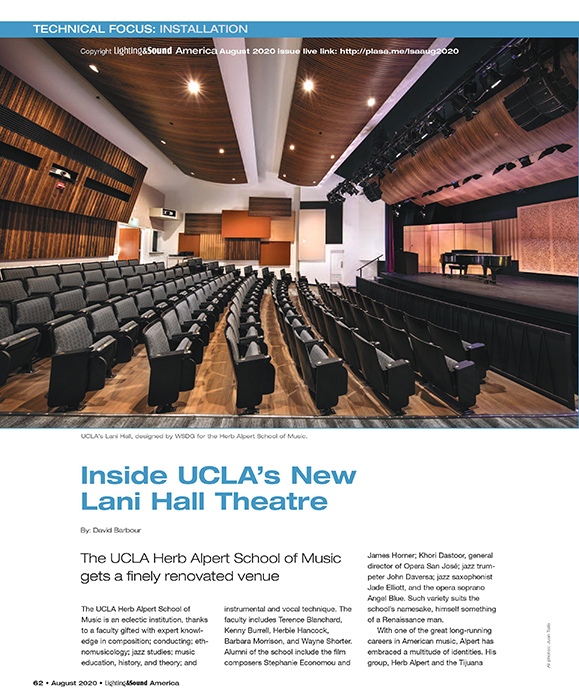 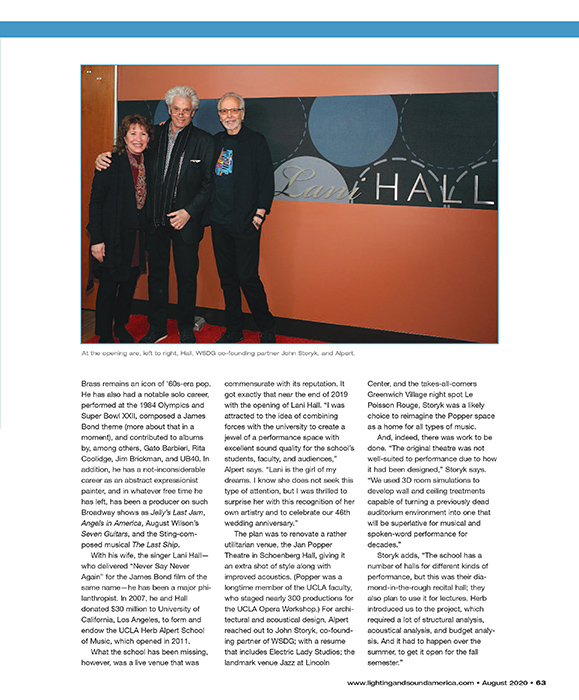 The UCLA Herb Alpert School of Music is an eclectic institution, thanks to a faculty gifted with expert knowledge in composition; conducting; ethnomusicology; jazz studies; music education, history, and theory; and instrumental and vocal technique. The faculty includes Terence Blanchard, Kenny Burrell, Herbie Hancock, Barbara Morrison, and Wayne Shorter. Alumni of the school include the film composers Stephanie Economou and James Horner; Khori Dastoor, general director of Opera San José; jazz trumpeter John Daversa; jazz saxophonist Jade Elliott, and the opera soprano Angel Blue. Such variety suits the school’s namesake, himself something of a Renaissance man. With one of the great long-running careers in American music, Alpert has embraced a multitude of identities. His group, Herb Alpert and the Tijuana. 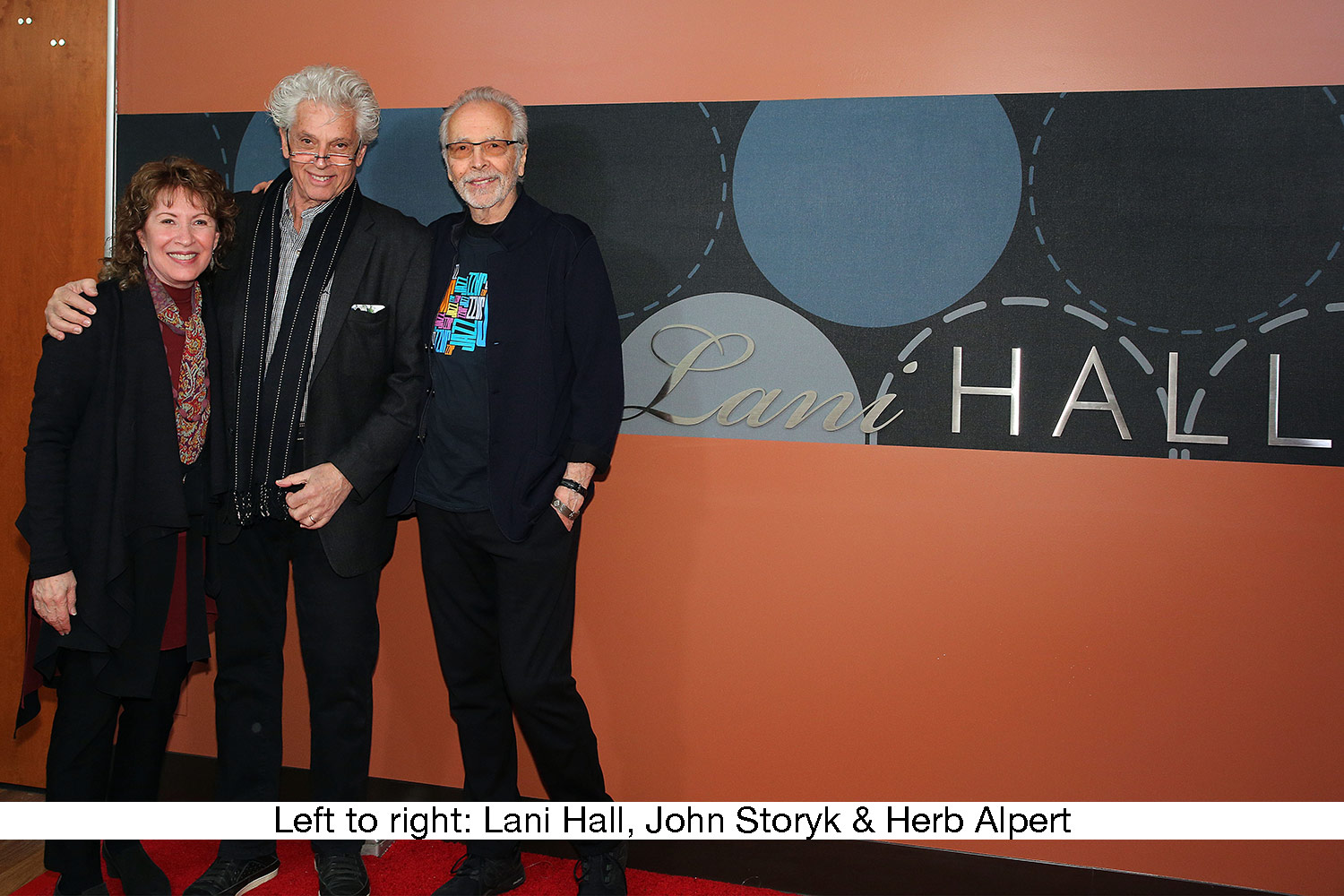 Brass remains an icon of ‘60s-era pop. He has also had a notable solo career, performed at the 1984 Olympics and Super Bowl XXII, composed a James Bond theme (more about that in a moment), and contributed to albums by, among others, Gato Barbieri, Rita Coolidge, Jim Brickman, and UB40. In addition, he has a not-inconsiderable career as an abstract expressionist painter, and in whatever free time he has left, has been a producer on such Broadway shows as Jelly’s Last Jam, Angels in America, August Wilson’s Seven Guitars, and the Sting-com-posed musical The Last Ship. With his wife, the singer Lani Hall—who delivered “Never Say Never Again” for the James Bond film of the same name—he has been a major philanthropist. In 2007, he and Hall donated $30 million to University of California, Los Angeles, to form and endow the UCLA Herb Alpert School of Music, which opened in 2011. What the school has been missing, however, was a live venue that was commensurate with its reputation. It got exactly that near the end of 2019 with the opening of Lani Hall. “I was attracted to the idea of combining forces with the university to create a jewel of a performance space with excellent sound quality for the school’s students, faculty, and audiences,” Alpert says. “Lani is the girl of my dreams. I know she does not seek this type of attention, but I was thrilled to surprise her with this recognition of her own artistry and to celebrate our 46th wedding anniversary.” The plan was to renovate a rather utilitarian venue, the Jan Popper Theatre in Schoenberg Hall, giving it an extra shot of style along with improved acoustics. (Popper was a longtime member of the UCLA faculty, who staged nearly 300 productions for the UCLA Opera Workshop.) For architectural and acoustical design, Alpert reached out to John Storyk, co-found-ing partner of WSDG; with a resume that includes Electric Lady Studios; the landmark venue Jazz at Lincoln Center, and the takes-all-comers Greenwich Village night spot Le Poisson Rouge, Storyk was a likely choice to reimagine the Popper space as a home for all types of music. And, indeed, there was work to be done. “The original theatre was not well-suited to performance due to how it had been designed,” Storyk says.
“We used 3D room simulations to develop wall and ceiling treatments capable of turning a previously dead auditorium environment into one that will be superlative for musical and spoken-word performance for decades.” Storyk adds, “The school has a number of halls for different kinds of performance, but this was their diamond-in-the-rough recital hall; they also plan to use it for lectures. Herb introduced us to the project, which required a lot of structural analysis, acoustical analysis, and budget analysis. And it had to happen over the summer, to get it open for the fall semester.” 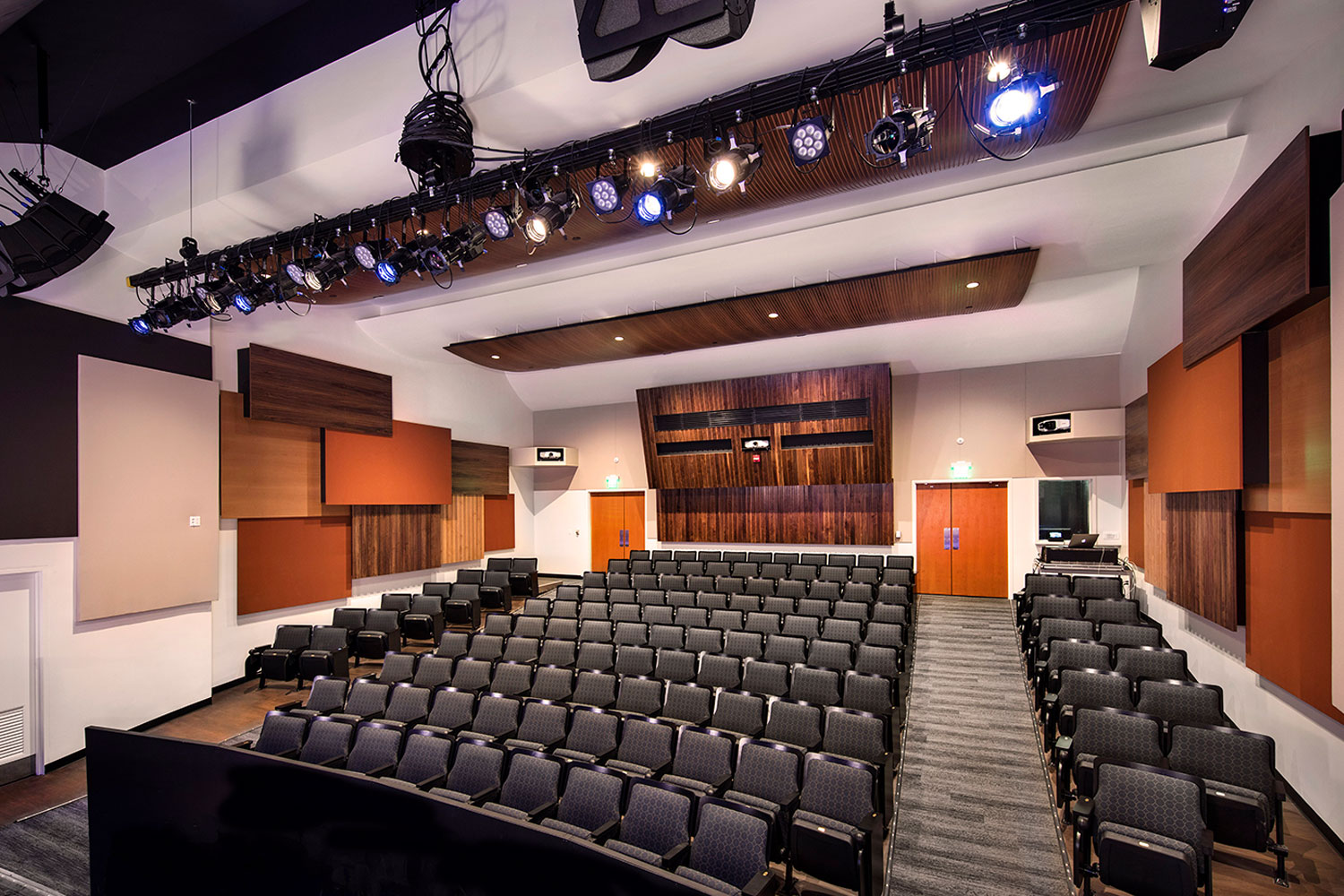 The view from the stage. The wall panels serve an acoustic function in addition to adding visual interest.

Storyk’s appraisal of the initial venue revealed several challenges.
“The room was constructed back-wards,” he says. “The stage was dead, acoustically. The hall had no acoustic treatments. We basically accepted its infrastructure, shape, and sizes as a given. We knew we couldn’t make it bigger, as it lives inside a larger build-ing. We also accepted its shape as a given. It wasn’t perfect, but it was certainly manageable.” Therefore, he says, “We developed a design solution that basically involved using a wide variety of applied surface treatments, ranging from absorption to diffusion to reflections, many of them curved; we used all custom shapes and sizes, created to our specs by RPG Acoustical Systems in [Passaic,] New Jersey and we retained an LA-based firm for the installation. In addition, we created a kind of ad hoc stage shell. Lani Hall has to fill a number of functions—including live music, amplified music, and lectures—so we asked RPG to come up with a set of very large, mov-able ‘gobos’ that can be easily positioned to enhance sound distribution.” WSDG partner/project manager Matthew Ballos says, “To accommodate the wide range of performances presented at the theatre, the stage was outfitted with six custom-designed multi-positional, perforated wooden gobos, along with rear and side wall acoustic panels, and cylindrical ceiling treatments to provide the variable acoustics required by diverse performing artists and instrumentalists. The stage shell, also by RPG, is flexible enough that it doesn’t take away from the hall’s minimal wing space.” Describing RPG’s contribution, Storyk says the company “has a large millwork shop with tremendous capacity. We had many discussions about final finishes and colors. Herb was involved; he is an avid painter and sculptor and is very color-sensitive. All of his shows have a video component. In the end, basically, he and I set the tone for the room.” As the accompanying photos show, the walls now feature a number of overlapping treatments, artfully laid out and featuring a variety of colors and textures. In addition to their acoustical implications, they function as pieces of visual art. Similarly, the ribbed wood ceiling and back well treatments add tremendous warmth to the room. The seats were also redone, and a new entrance was provided, in compliance with the Americans for Disabilities Act. WSDG specified a compact reinforcement system. The loudspeaker component consists of eight L-Acoustics Kiva II long-throw modular line sources. The Midas M32 digital console, which is designed for both live and studio use, offers 40 input channels, 32 Midas PRO microphone preamplifiers, and 25 mix busses as well as live multitrack recording. The lighting system, by ETC, is controlled by an ETC Gio console. Video includes three Epson Pro G75500 projectors, offering 4K enhancement without additional lenses, and a DA-LITE motorized projection screen. Other gear includes three Sony BRC-X1000 robotic cam-eras and a Sony Anycast live broad-cast video switcher. 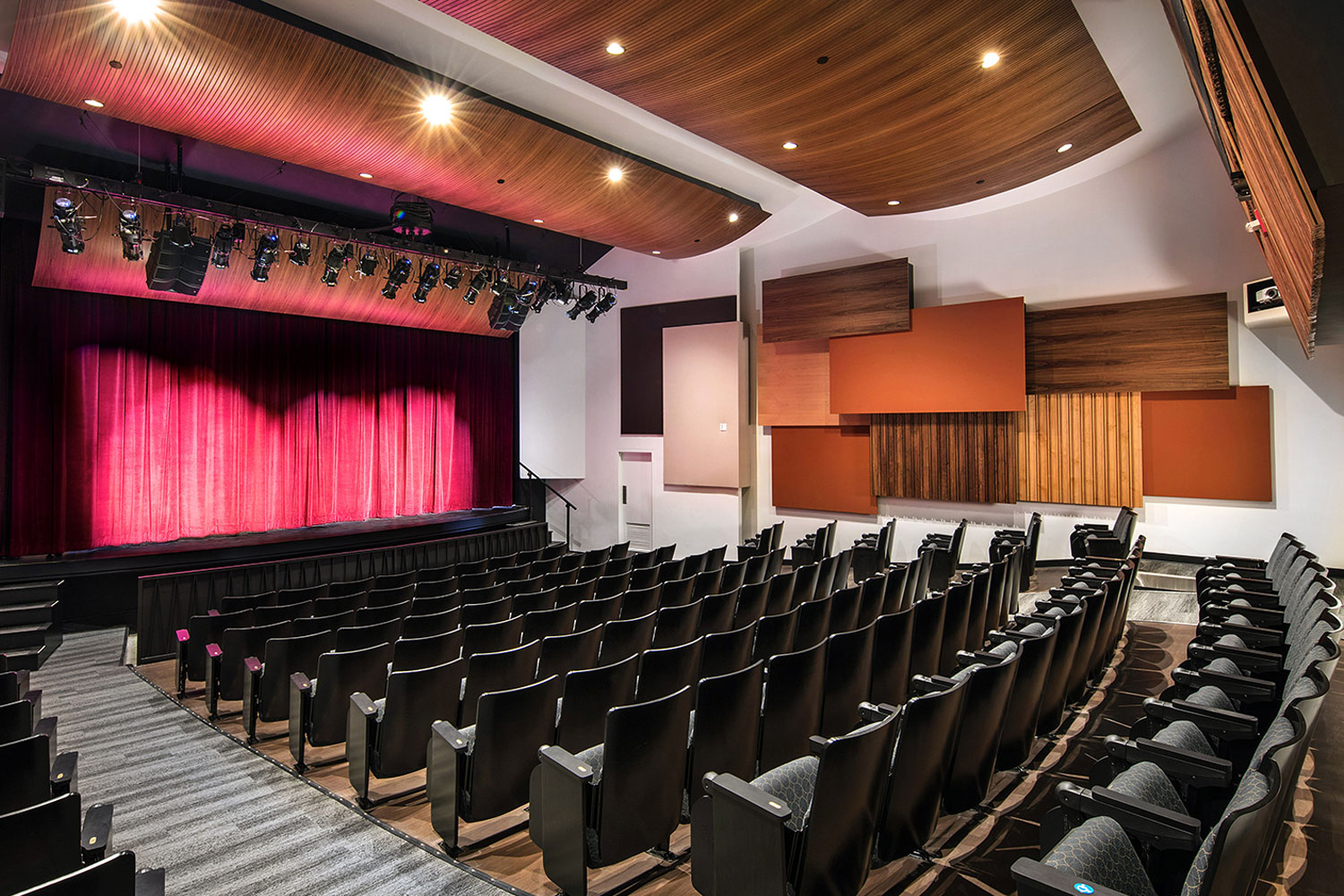 “We used 3D room simulations to develop wall and ceiling treatments capable of turning a previously dead auditorium environment into one that will be superlative for musical and spoken-word performance for decades,” Storyk says.

The 133-seat venue was renovated for $3 million. In conjunction with the Herb Alpert Foundation’s gift, UCLA contributed funds toward the theatre renovation and to other Schoenberg Hall upgrades, including the renovation of four ensemble rooms. The refurbished venue was unveiled in December with a program featuring vocalists Barbara Morrison and Gretchen Parlato and students from the music school. The event highlight-ed the Herbie Hancock Institute of Jazz Performance at UCLA, which Alpert helped bring to UCLA in 2011, and the global jazz studies program. “Herb and Lani’s gift is an inspiring example of what we accomplish when visionary philanthropists partner with a public university such as UCLA,” says Eileen Strempel, dean of the school of music. “We are grateful for their generosity, which has transformed this theatre into an incredible resource for our students, school, and community—a timely asset that amplifies our growing global jazz program and sup-ports the work of all our students and performers.”