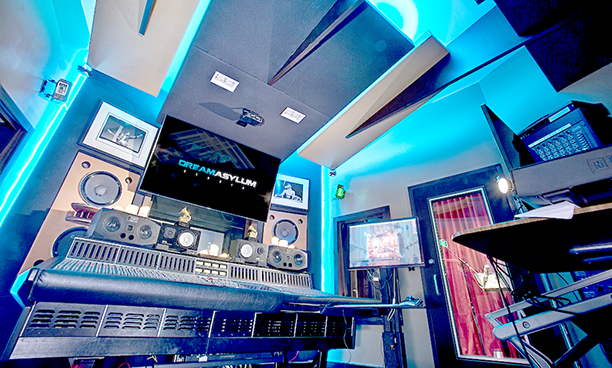 Dream Asylum Control A features wooden equipment cabinets and a dropped ceiling, while Control B has a custom rear wall wooden resonator and geometrical ceiling cloud. They have identical SSL9000 consoles and WSDG/Augspurger monitor systems, and access to a 600ft2 live room/iso booth. 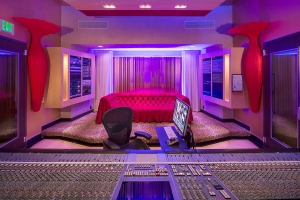 Carved out of a nearly 4,000ft2 former warehouse in one of the South Florida’s most beautiful cities, Dream Asylum is a sophisticated amalgamation of first tier technology, impeccable acoustics, and inspirational accoutrements. The complex includes a comfortable lounge/screening room, and a solarium to provide a relaxing respite. Two oversized in-wall tropical fish tanks offer additional creative inspiration.

The rooms are linked via below-floor wiring channels, to provide connectivity throughout the complex.

Thanks to its room-within-room isolation, Dream Asylum enables Danja and/or Araica to record live sessions via either control room while a second engineer/producer simultaneously mixes another project. Distinguished by a striking oversized ‘fan’ inspired ceiling cloud; a 192ft2 mixing/writing room has been created for guest artists.

‘We worked closely with Marcella to find the most appropriate site for the studio, and formal design work on Dream Asylum Studio began in 2011,’ says WSDG Project Manager Romina Larregina. ‘She is extremely savvy about design and acoustical issues, and having knowledgeable clients who can articulate their design and technical goals is always a plus.’

‘Danja and I have worked in many great studios, from Electric Lady to Jay-Z’s Roc The Mic,’ Araica says. ‘I started out as an intern at The Hit Factory, and their Studio E Live Room was one of the best sounding rooms ever. John Storyk’s design and acoustical skills contributed to the success of all those rooms.

‘When we decided to build our own studio we were committed to going with the best. I called John to bring WSDG on board. They worked with us on every level, and we love what they’ve done for Dream Asylum. It was a great collaboration. We are extremely proud to have a studio that looks and sounds this great.’