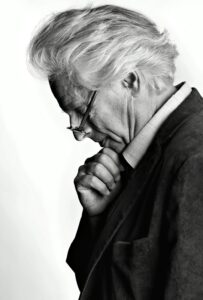 John Storyk is one of the top acousticians in the world. An architect and acoustic expert, Storyk co-founded Walters-Storyk Design Group (WSDG), an international firm that designs studios — ranging from major music studios to small podcast facilities.

Beginning in 1968 with Electric Lady Studios for Jimi Hendrix in New York City, Storyk has more than 50 years of experience as a designer of acoustic spaces.

Storyk is a frequent contributor to AES Convention Panels and Papers. A recipient of the AES Fellowship Award, he lectures at schools around the United States. He has established courses in acoustics at Yale University; Columbia; NYU; Ex’pression Center for New Media in San Francisco; Full Sail Center in Orlando; and the Berklee College of Music in Boston.

Frank Beacham: There’s a trend today to building recording and streaming studios in offices and homes. What are the challenges of designing professional-quality acoustical studios in places that weren’t originally designed for it?

John Storyk: That’s a really big question. One issue we always have to deal with is isolation…people bothering us or us bothering them. It depends on the project, but it can be difficult and expensive. This happens in not only studios, but night clubs, restaurants, offices, conference rooms — any space that has low environmental noise control. In most cases, it’s just good neighbor stuff…and common sense. Restaurants don’t want to be bothered by outside noise. Executive conference rooms need a certain amount of quietness to conduct business.

Frank Beacham: To build a studio, do you have reconstruct the basic structure of these spaces? 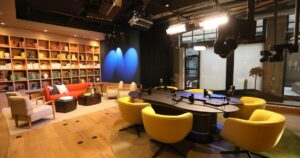 John Storyk: Sometimes, yes. We often have to build a room within a room. Sometimes, we simply reject the site. Like when the floor load cannot support a studio or the room doesn’t have the required resonant frequency and we can’t change it. Normally, though, we can take care of it by just simply adding mitigating construction.

Studios require field testing. It’s not rocket science, but it is science. And you don’t want to skip that step. Why? Because if you miss this step, and you don’t get it right, it is very difficult to go back and correct it. By the time you’ve made the mistake, the project is finished. We sometimes get asked to fix problem studios. I really think twice about getting involved because I know it’s going to be hard and I know that people are just not going like what I tell them.

Frank Beacham: Recently, you’ve designed a lot of small podcast studios. Anything unique about them?

John Storyk: Podcast studios are not acoustically different from radio stations, isolation booths or small recording studios. Generally, to simplify the project we do room within room or decoupled construction. That includes floating floors that don’t actually float, and separate internal partitioning and a decoupled ceiling. These techniques are well known and have been around a long time. Though you can easily screw it up. Use the wrong spring, the wrong spacing, the wrong isolator and the load is wrong. But when you get it right, it works.

None of this has anything to do with the internal room acoustics, which is a totally different animal. That’s what we do on the inside of rooms…including treatments, panels, diffusers, absorbers, reflectors, scattering elements and changing the geometry. 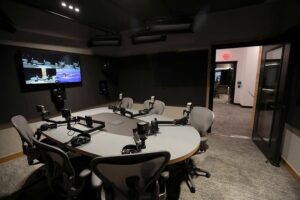 Frank Beacham: Let’s say you have multiple production rooms in an audio facility, and you want to record part of a show in one room and move to another room to finish. I assume you want each room to sound identical. How do you do that?

John Storyk: That’s a very interesting question. We just finished 16 podcast rooms for Spotify in Los Angeles, one of the largest such facilities anywhere. Most of the studios are very much like vocal booths. But they had to sound exactly the same. In most recording studios, each room may have a slight color or one may be a little brighter sounding than another. Podcast studios are tested to make sure the sound is the identical from studio to studio. There are some tricks we can apply to achieve this, but the requirement is different from traditional studios.

Frank Beacham: A lot of people are doing video streaming or recording in podcast studios. How does this trend affect your work? 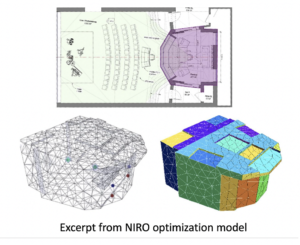 John Storyk: Video is very popular now, both in podcasting and radio studios. Another trend is the studios are getting smaller. I know that sounds like it shouldn’t be a problem, but it actually is. Because as studios get smaller, dealing with low frequencies has become more important. Low frequencies have very long wavelengths that are an order of magnitude bigger than the size of the room. This can cause phase issues and it becomes a challenge.

It became such an issue that it caused us to create propriety predictive software to deal with the problem. The software is called NIRO, a wave-based computer-modeling tool, and it’s licensed by REDIAcoustics, the research and development arm of WSDG. The software has been used on about 50 rooms with excellent results. NIRO evaluates precise numerical models for small room audio production and listening environments via a series of calculation modules.

Frank Beacham: What are the major new trends now in studio design?

John Storyk: A big trend is prefabricated acoustic materials. Materials that you can buy and apply to walls rather than build on site. It makes it easier, cheaper and faster to build studios.

Frank Beacham: How is this different from the slabs of acoustic foam now glued to walls?

John Storyk: These are pre-constructed elements that get attached in the space, as opposed to stretching fabrics or hanging baffles like we did back in the 1980s. The world of pre-fabricated acoustic materials has grown quite a bit in recent years. There are a number good companies that do nice products that have been tested with verifiable results.

Frank Beacham: How big a role does video now play into podcasting?

John Storyk: A bit more than in the past. Almost every design we do today is getting set up for video. So that means MX control or maybe light bars in the studios. Another trend is immersive audio, which I believe is here to stay. However, right now immersive sound technology is the wild west. Standards have to get sorted out. Everybody’s going to have to figure out how to actually mix this stuff. But it will get worked out.

Frank Beacham: Are engineers still found in this new breed of studios?

John Storyk: Today’s studios are simpler to operate. At Spotify, all the rooms are auto-operated. They don’t need an engineer…producers can operate the rooms. Some have a room setup for a traditional engineer in one room, but generally the content creator operates the equipment.

Frank Beacham: What’s the future for podcasting and this rapid rise in small studios?

John Storyk: The threshold of entering podcast creation is very easy. All one needs is a laptop, an interface and a good idea. If you have a few thousand followers, you’re in the podcasting business. The threshold of entrance is very, very low. It’s a carpe diem moment. You’re going to see an expansion to churches, stores, cruise ships, every kind of business will do podcasts. It’s essentially an unlicensed radio station.

John Storyk: I don’t think video is going to grow as much, but immersive audio will. The reason is that four billion people listen to 98 percent of their music on earbuds. They don’t walk around with TV screens. And they are definitely not going to walk around with those stupid AR goggles. There is plenty of time for audio, but one has to be in front of a screen for video. That will always limit it.