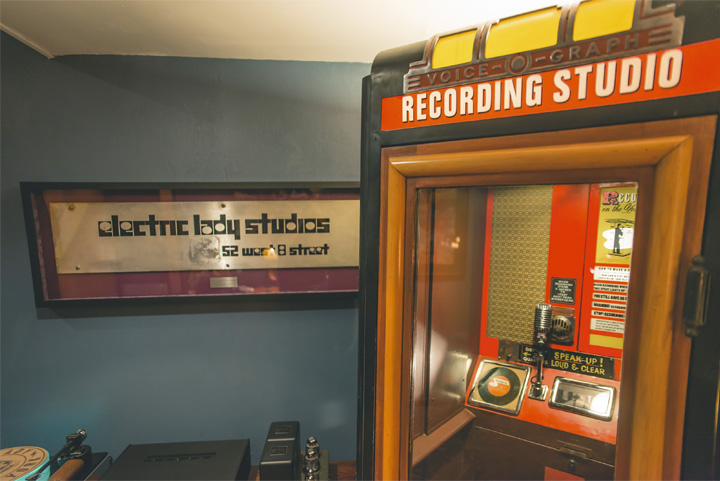 I usually start by telling people about the many famous records that were made here: Talking Book, Horses, Young Americans, Combat Rock, Back In Black, pieces of Physical Graffiti and Houses of the Holy—they’re all albums that don’t need any explanation beyond their titles. Listen to the opening lines of The Rolling Stones’ Emotional Rescue album and hear Mick shout, “Hey, what am I doing standing here on the corner of West Eighth Street and Sixth Avenue?” It’s a reference to the cross streets of the studio’s location. 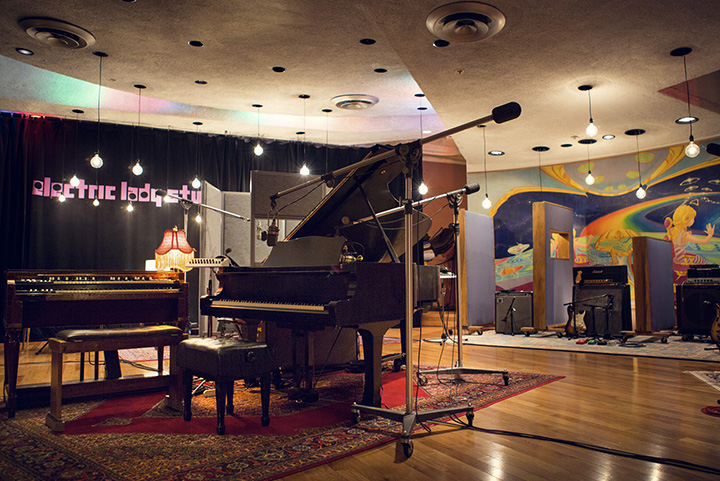 This is Studio A, the room Jimi had designed and built to his specific taste. People often ask me which songs he recorded here before he passed. My favorites are “Freedom,” “Angel,” and “Dolly Dagger,” which were released posthumously on the Cry of Love and expanded First Rays of the New Rising Sun albums. The room has seen little aesthetic change since it was first built, and has lots of curved, round surfaces and windows per Jimi’s detailed wishes and instructions. 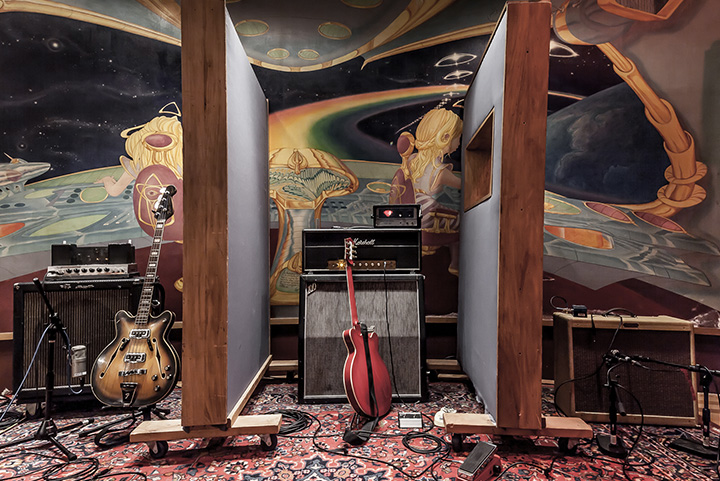 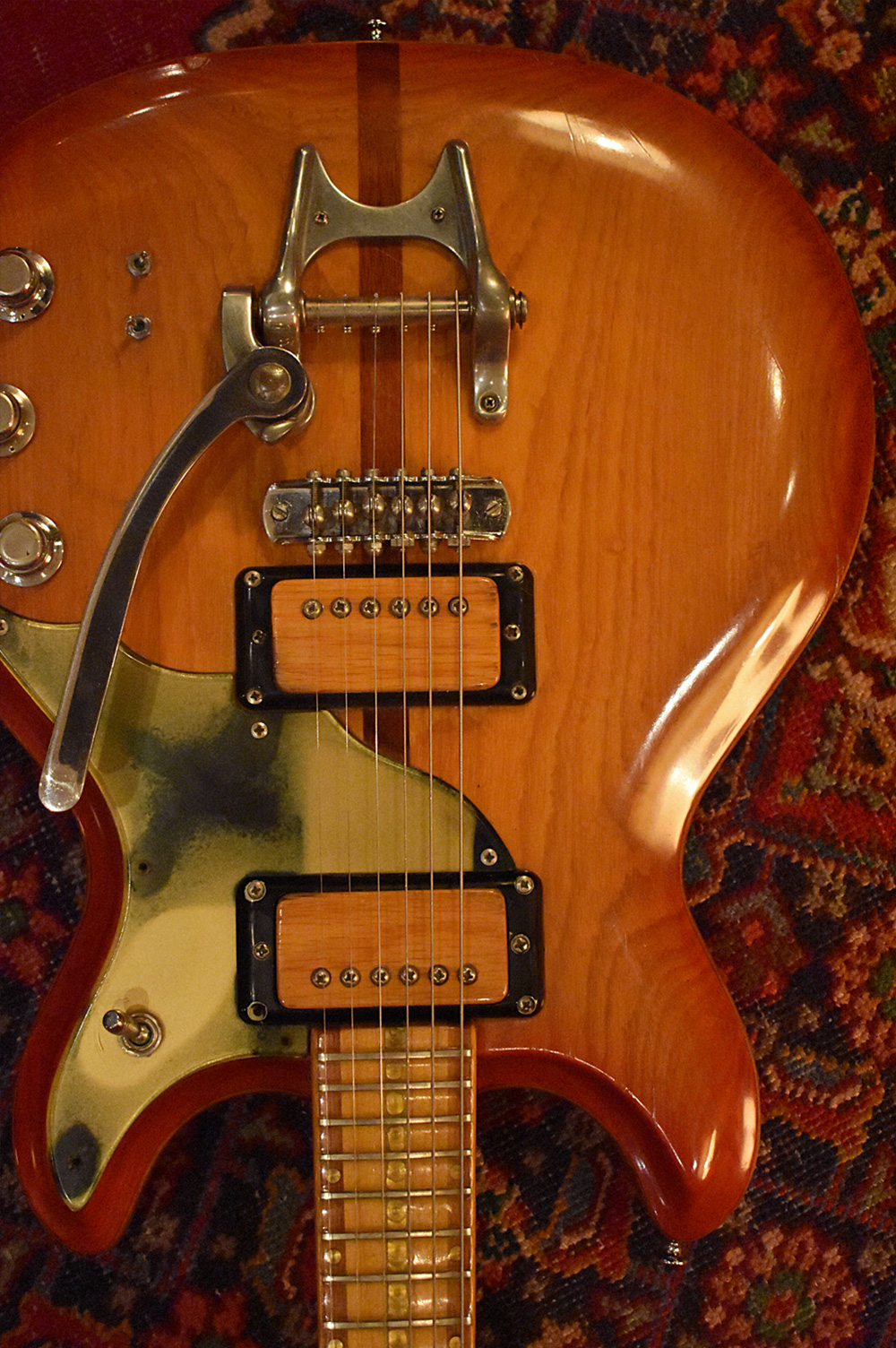 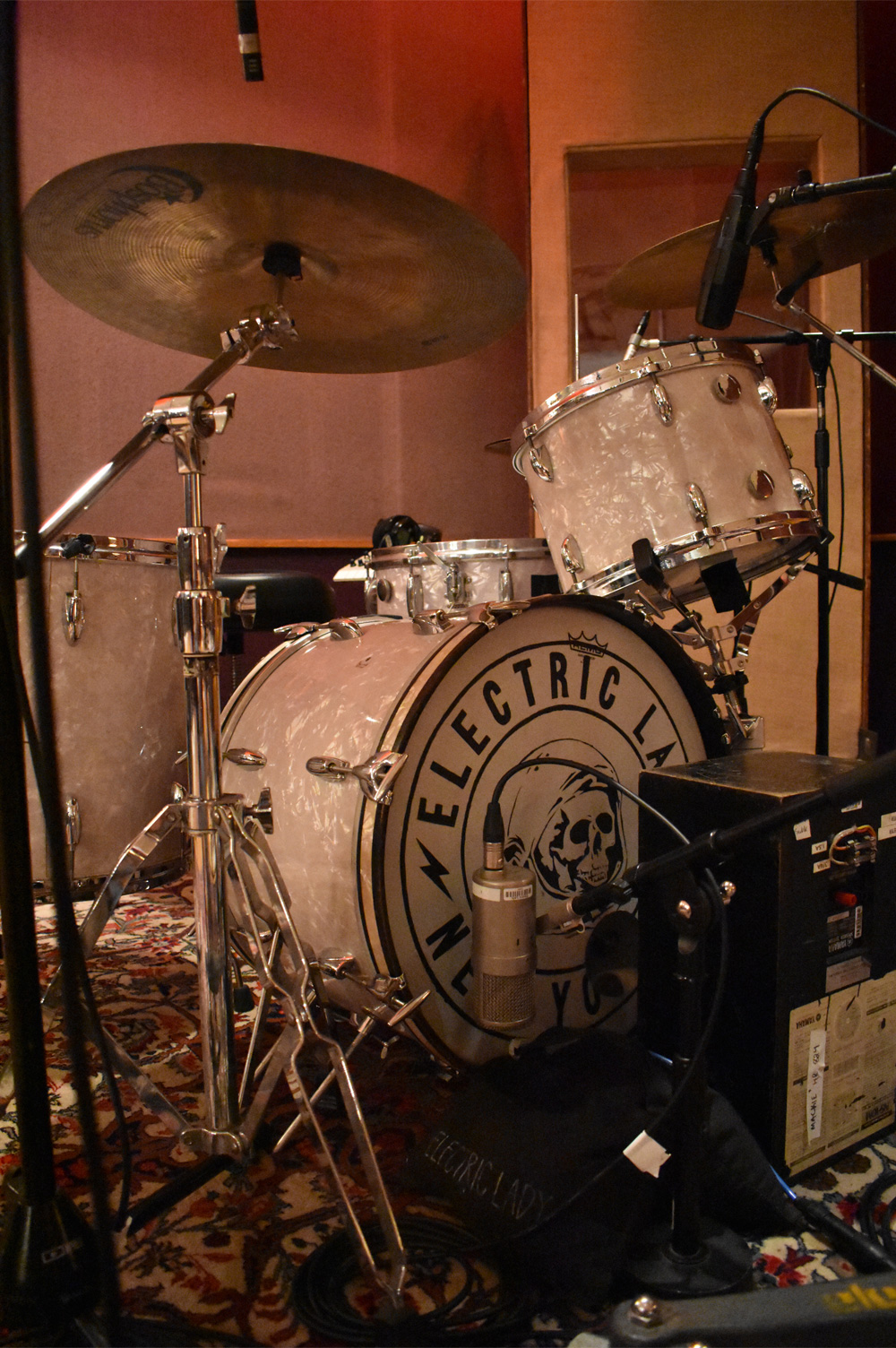 This Gruggett guitar was given to me by Ryan Adams. Bill Gruggett was a Bakersfield-area guitar maker in the 1960s with affiliations to the Mosrite and Hallmark companies. He established his own line in 1967, but the company folded one year later. This particular guitar (along with a 12-string acoustic and mandolin) showed up at the studio after Ryan had finished recording Easy Tiger here. I thought maybe he’d sent them in preparation for more recording, but when no one called to schedule sessions, I called him to check in. “I thought they should be yours,” he said. “I got my songs out of them, so it was time to hand them off.” He likened them to a magician’s wand and the sharing of them between sorcerers. It’s one of my favorite memories. 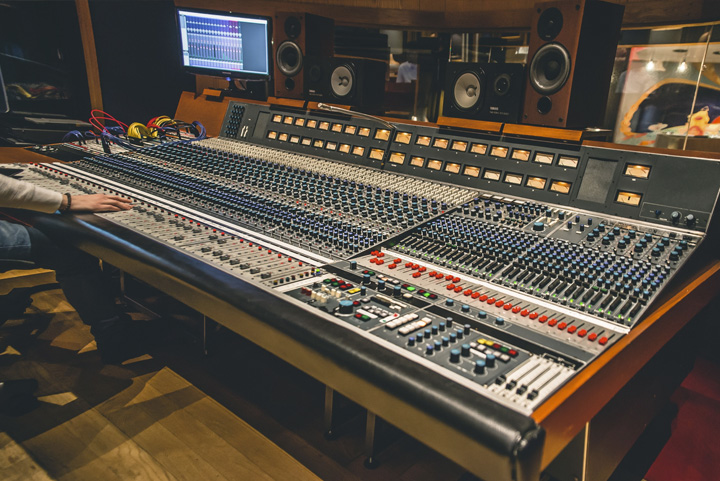 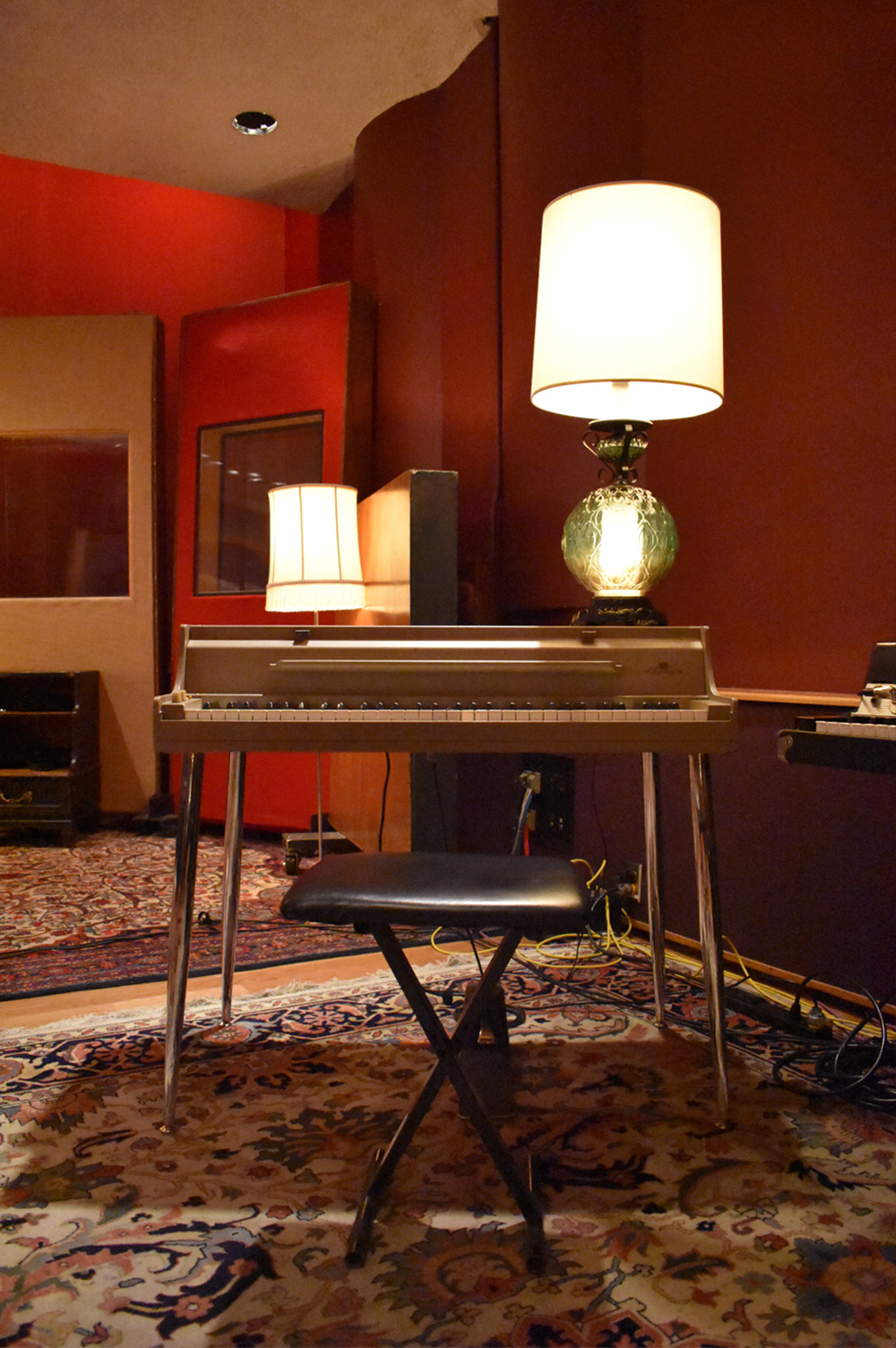 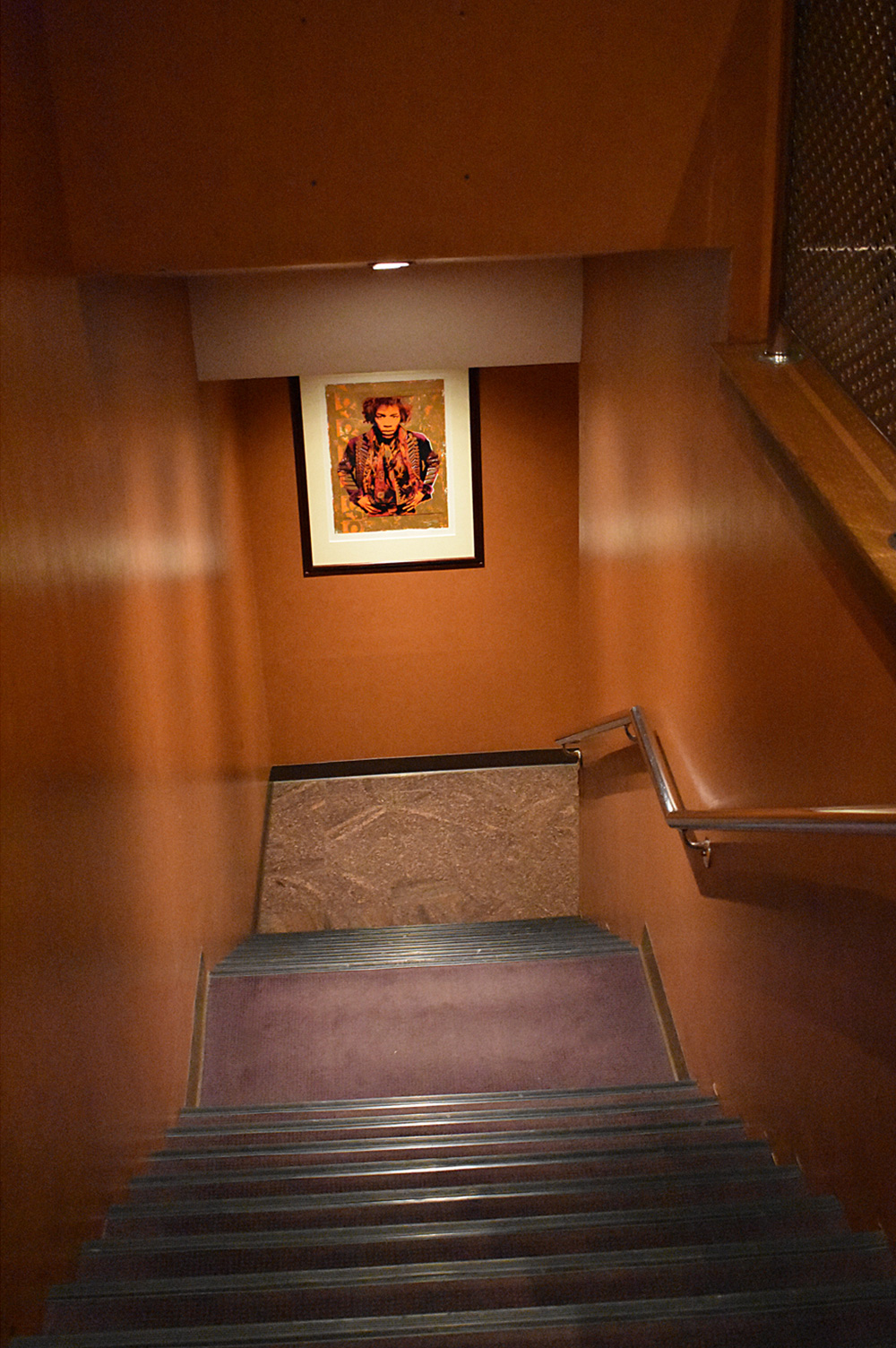 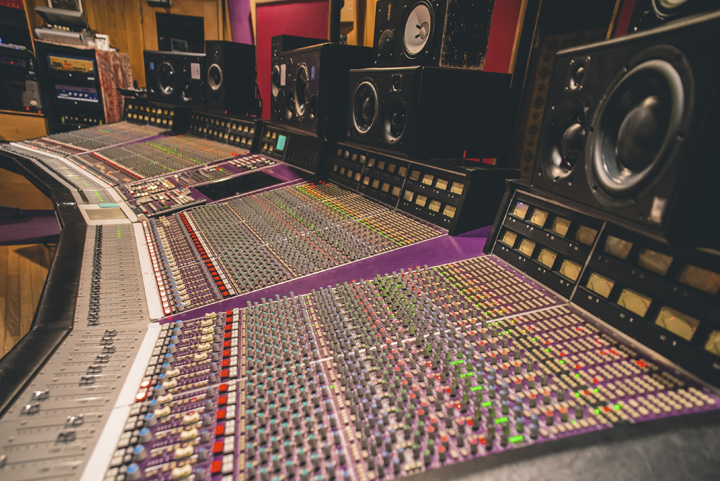 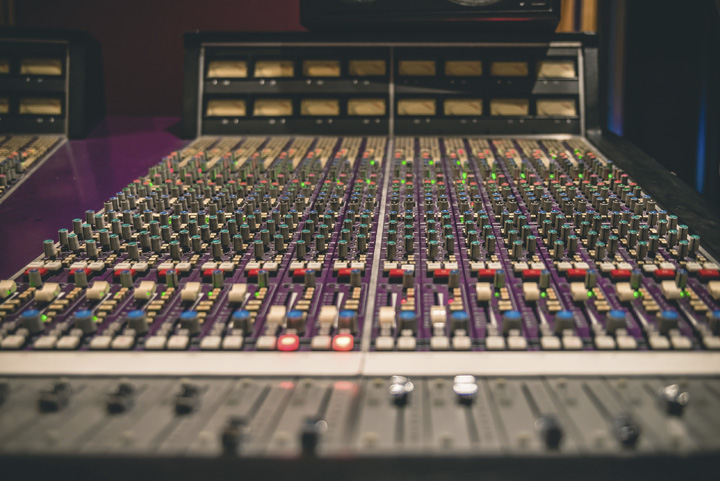 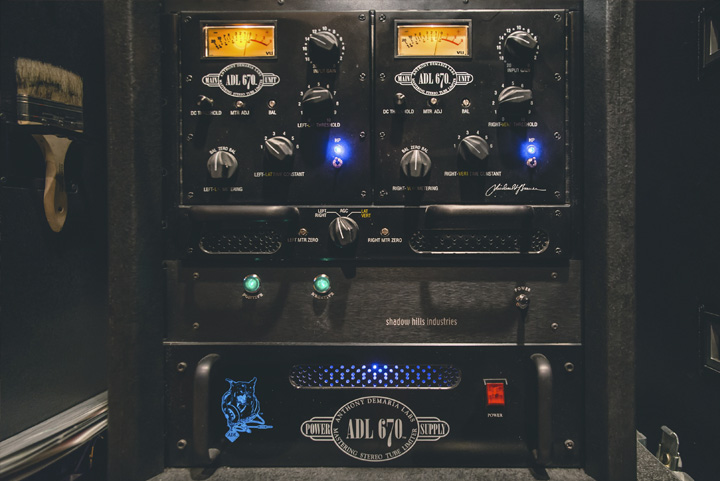 Decoupage bathroom murals from the early 1970s. The night manager at the time, Daniel Blumenau, used to “smoke grass and glue pictures on the walls” while sessions were going. This is a detail of the women’s room today. 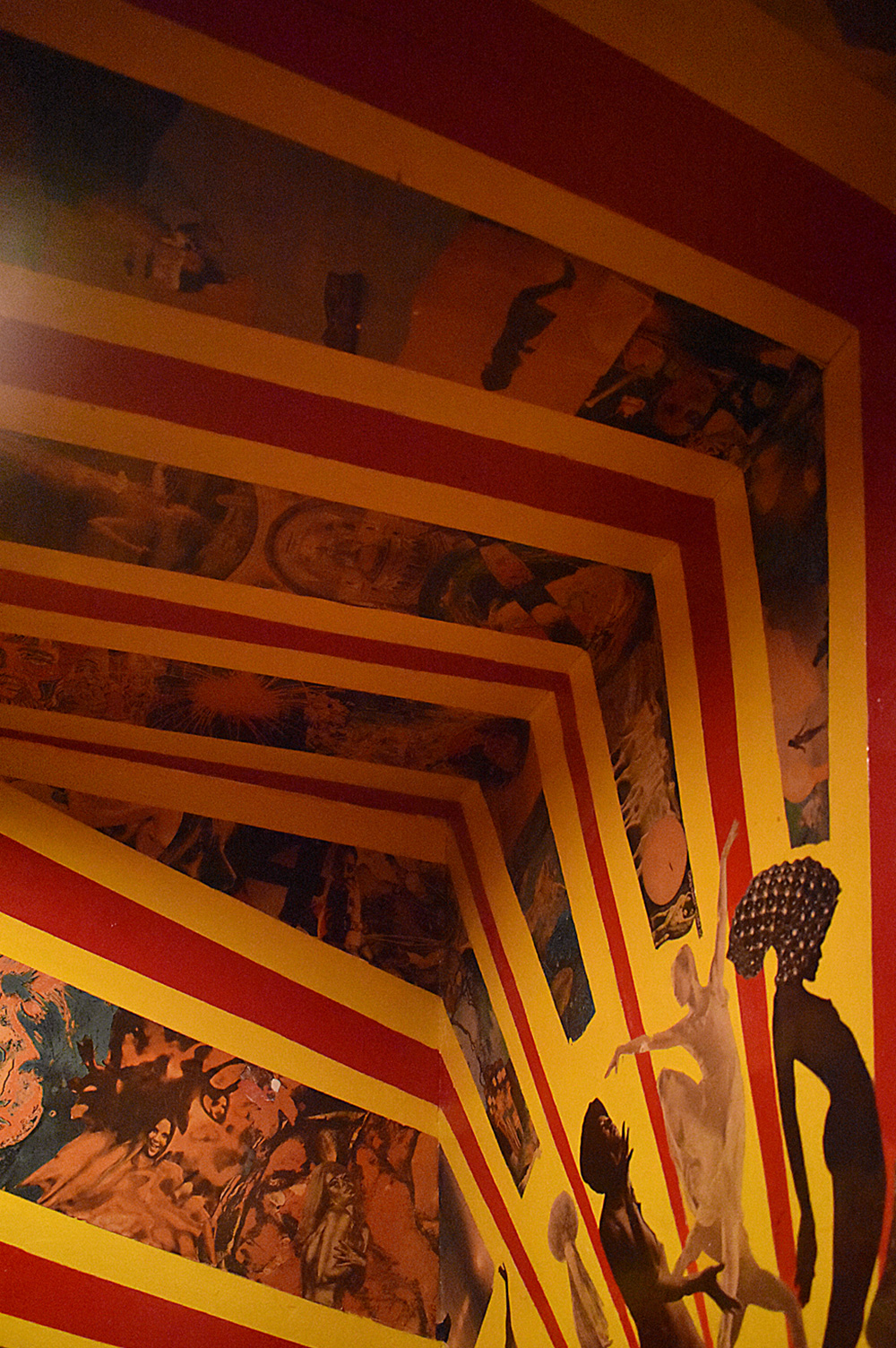 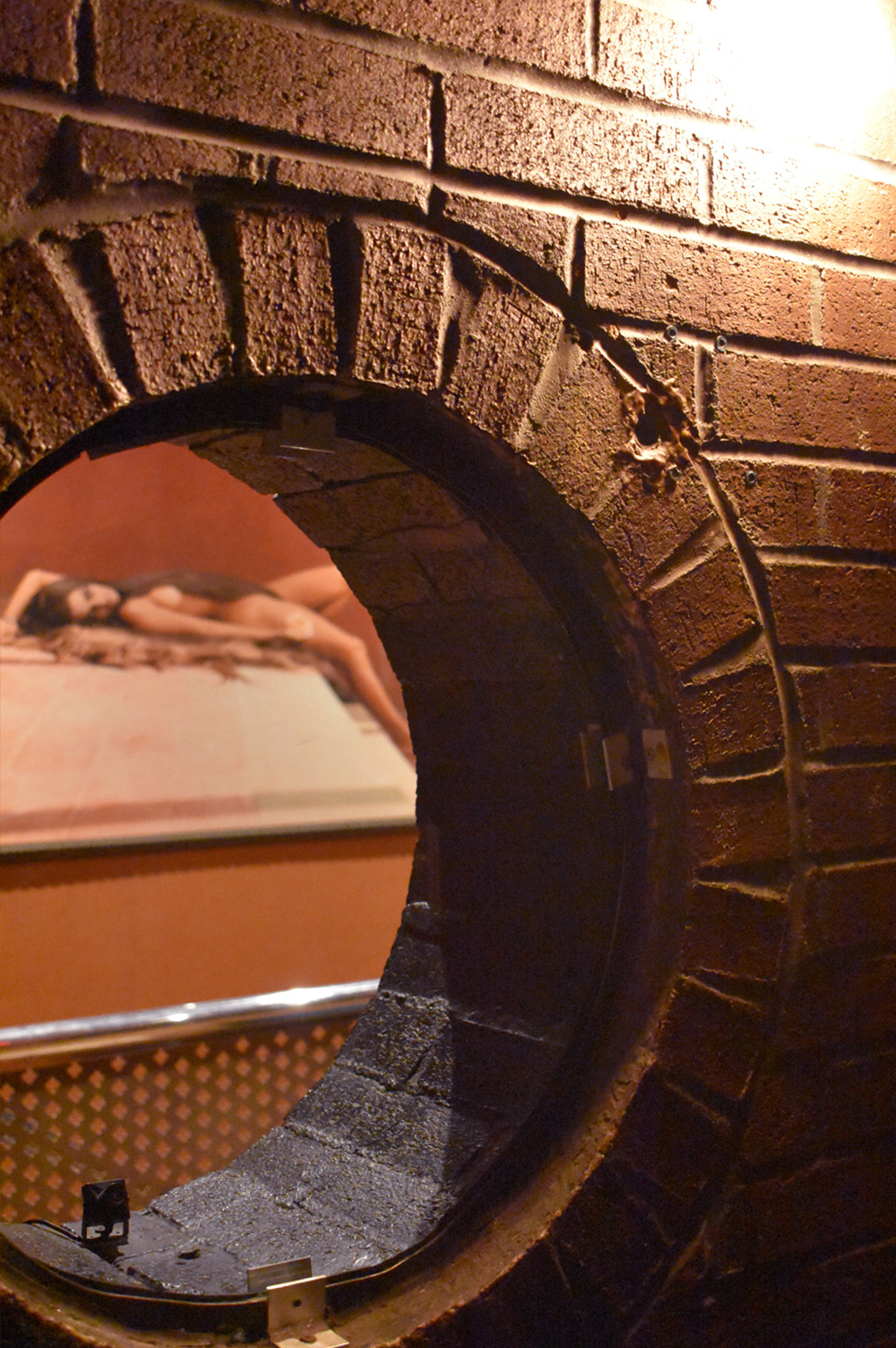 We call this “Client Lounge,” which is just down the stairs en route to Studios A and B. It’s a hang area for meetings and phone calls or to take out a vinyl record from our collection and give it a spin on the McIntosh turntable. The records on the wall are albums that were worked on here. Most of these are easily recognized, but have you listened to One Way…Or Another by Cactus? Because you should do that. The band recorded the album here in 1970-1971 as well as a portion of the subsequent album Restrictions. 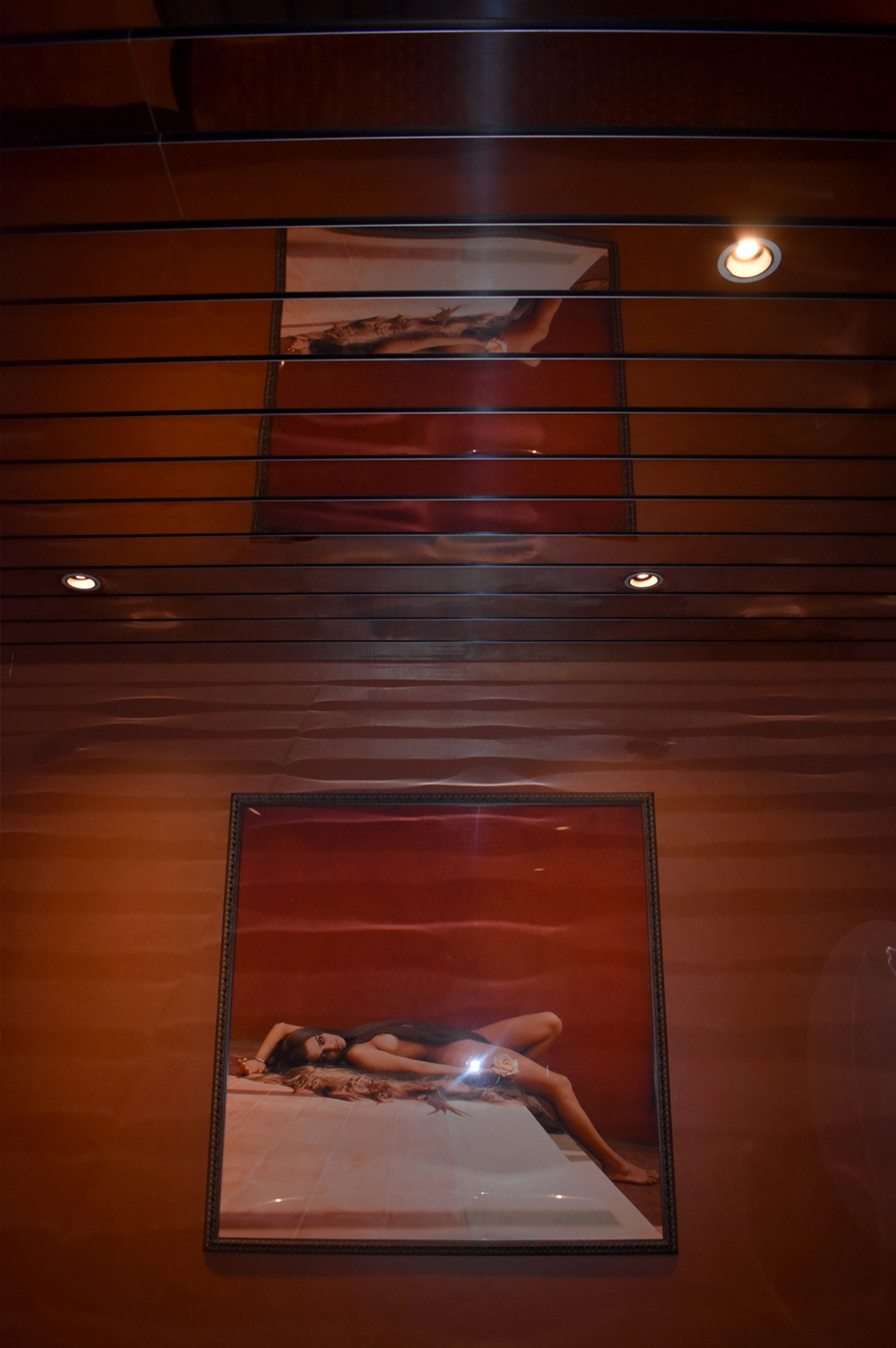 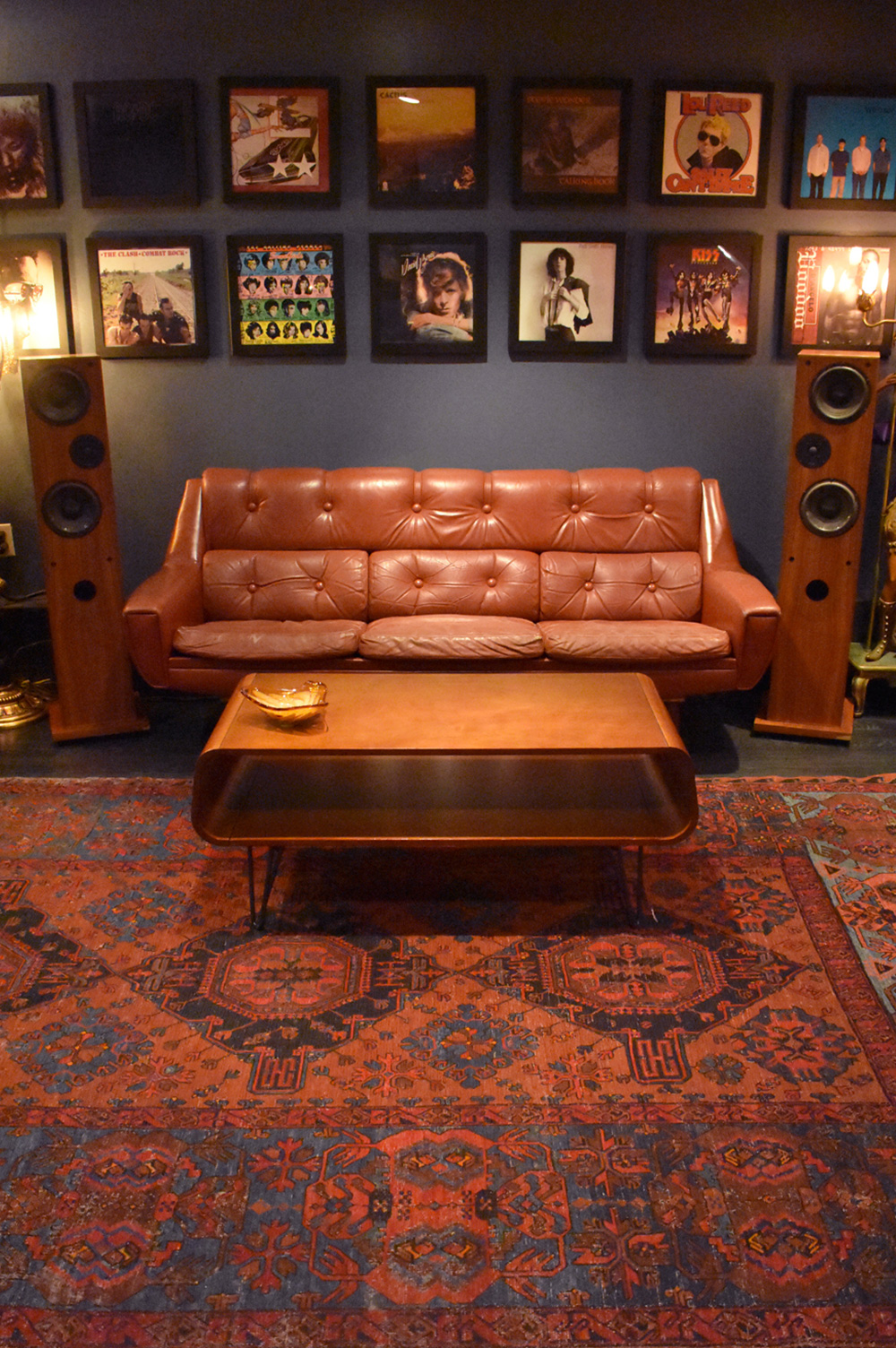 Some more views of our Client Lounge including our 1947 “Voice-O-Graph” recording machine. We’ve traced it as far back as 1962 where it was a feature at Jones Fantastic Museum during the Seattle World’s Fair. A torn ticket was found inside the machine during its restoration and pointed the way to its history. 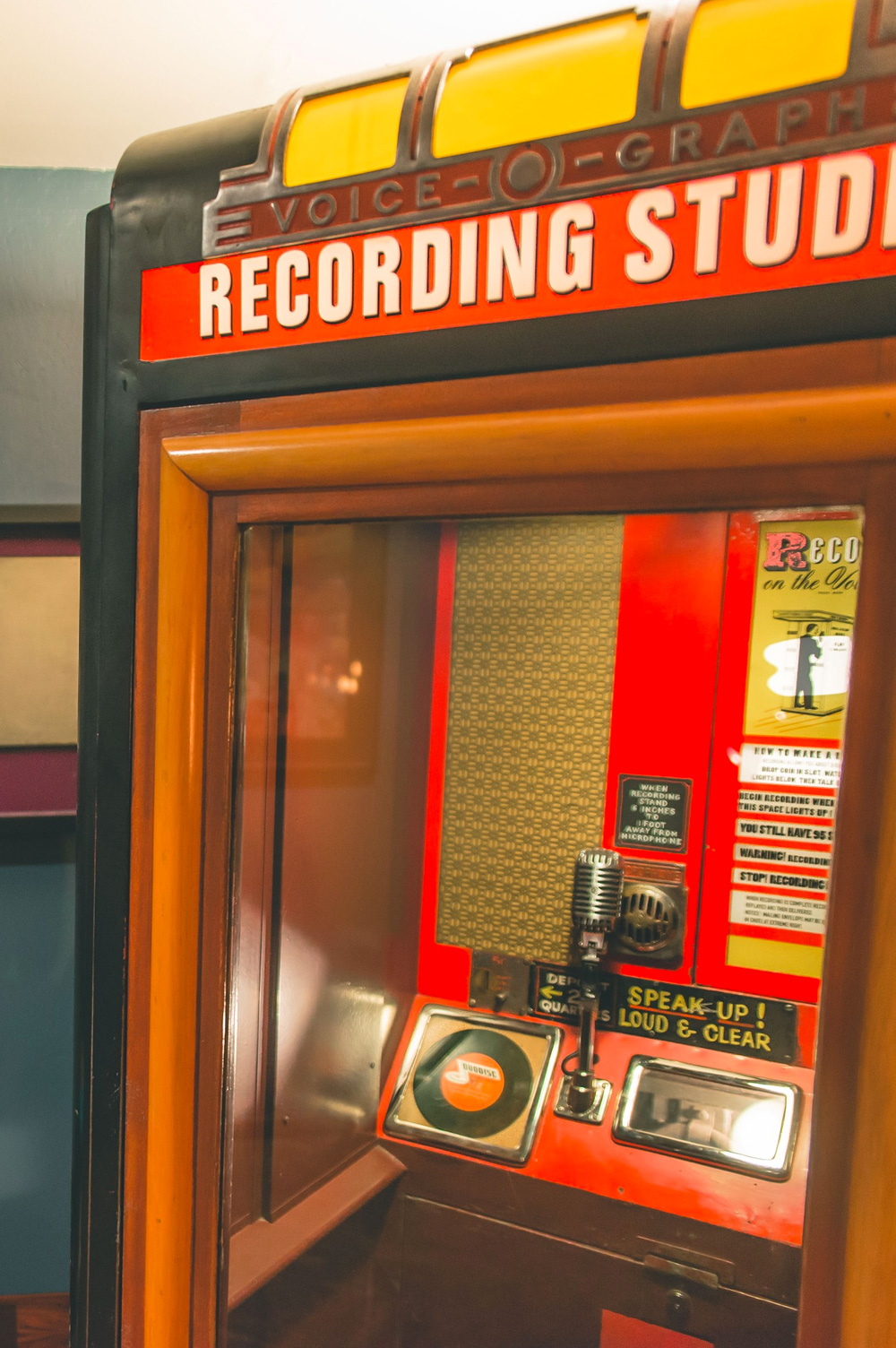 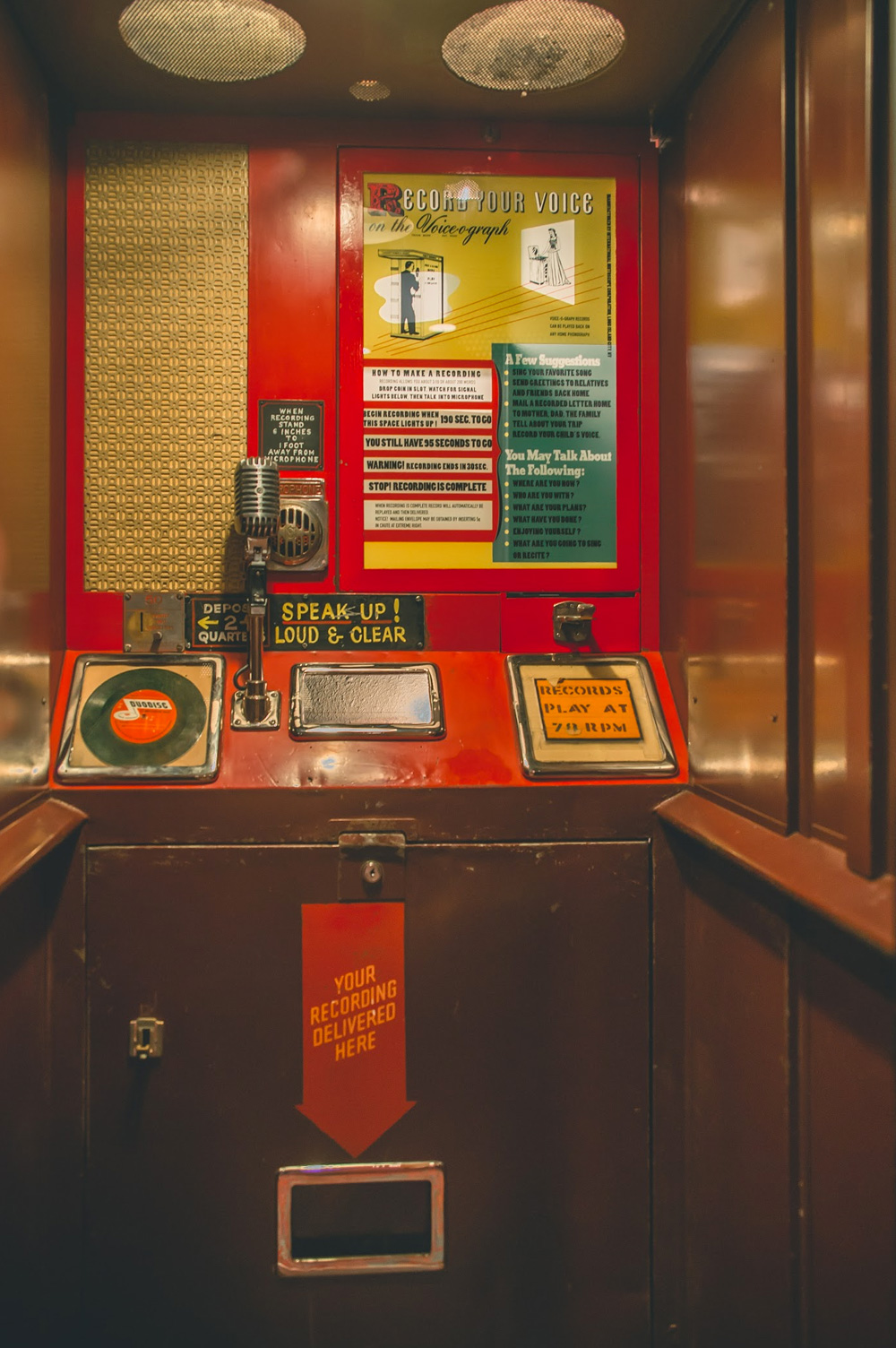 This is a detail of the decoupage image used for the inside gatefold of Stevie Wonder’s Music Of My Mind album. Stevie recorded the album here—along with Talking Book and Fullfillingness’ First Finale—in the early 1970s and became fascinated with the wall textures of the men’s restroom. Remember the night manager story from earlier? He got the job to make the artwork for the album because Stevie could “see the images” by feeling the cuts and tears of our decoupage walls. We have the original piece framed and hanging in our client lounge. 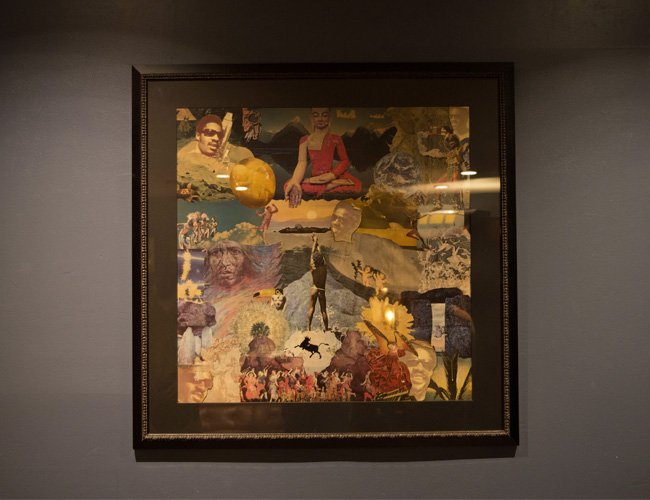 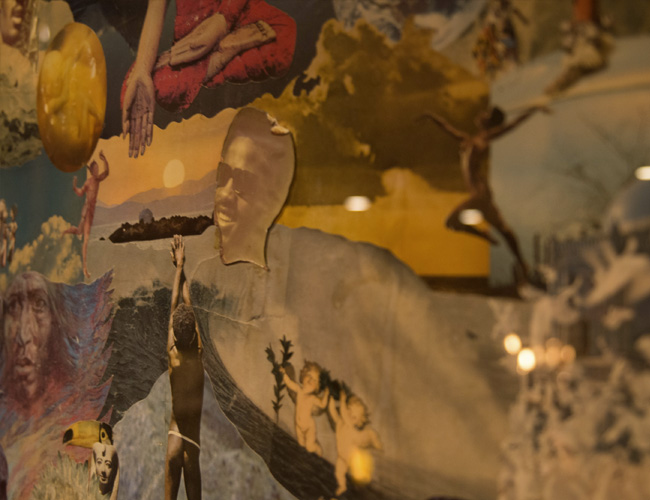 This is the largest mural in the building: a 100-foot section in the tunnel to Studios A and B. The pink-haired figure shown here has long been called “The Electric Lady” by clients and staff. 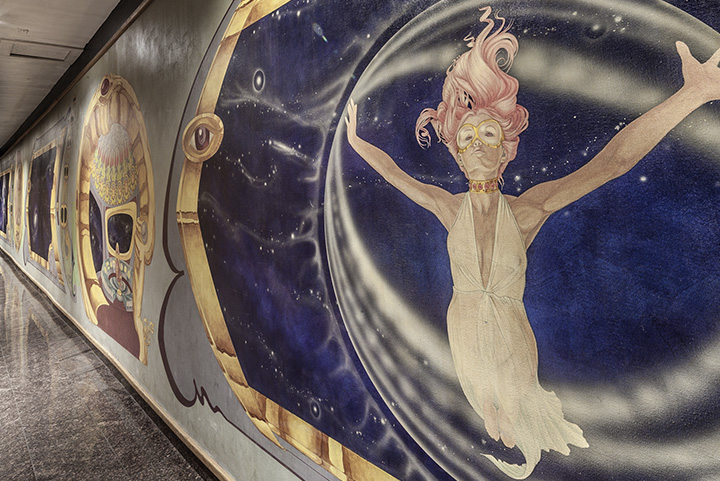 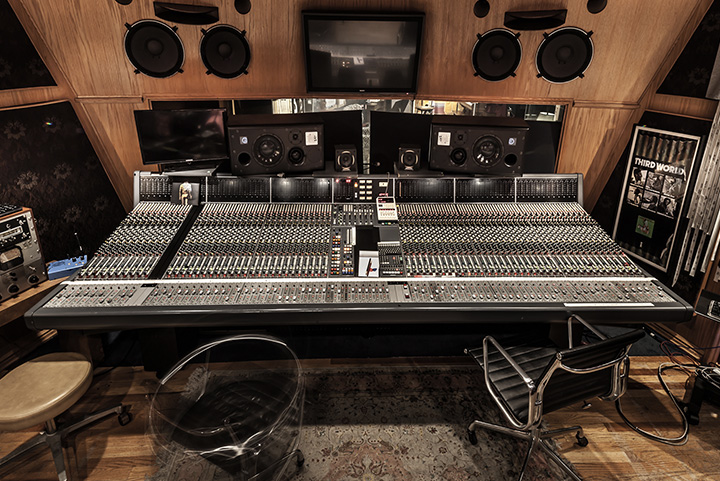 Below you can see details of the newly built Studio D. Dan Auerbach curated this room with his vintage, customized Altec 9200 Console (16 Altec channels, 8 Spectrasonics channels) and Norman Druce Audio monitoring system. The orange chairs came to us from Ryan Adams’ kitchen. 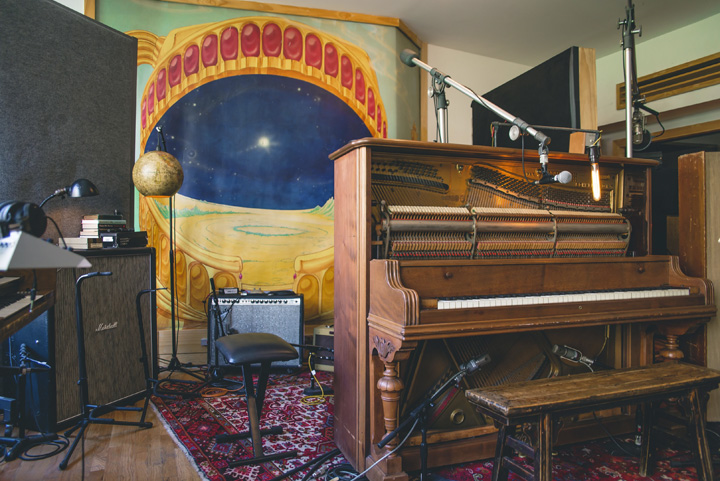 So, there you have it: the first-ever pictorial tour of Electric Lady. Say what you will about traditional commercial facilities. These are the places that inspire the “everything vintage,” customized spaces of today. Artists still very much want to be inspired by a building with a true musical heritage and history, and Electric Lady is arguably the best surviving example. It was also one of the first, if not very first, artist-designed and owned spaces in existence. It​ ​has​ ​more​ ​personality​ ​and character​ ​than​ ​the​ ​typical​ ​commercial​ ​facility​ ​because​ ​Jimi​ ​built​ ​it​ ​with​ ​his own comfort​ ​in​ ​mind.