On The Cover: Appalachian State University 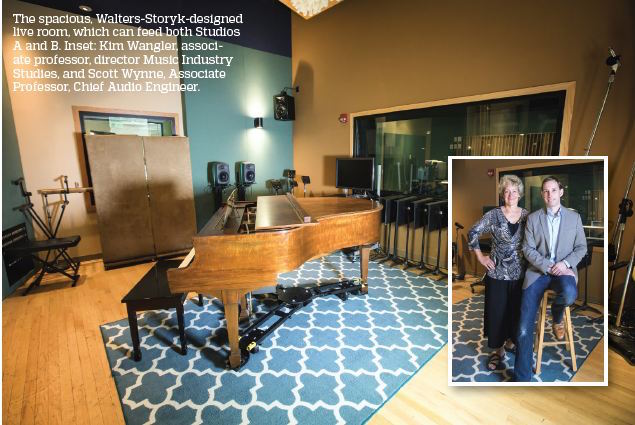 The best engineers know music. They know the language, the nuance, the math and the emotion. They know the scale and the rules, the progressions and the timing. Most importantly, they know how to talk to musicians and make them comfortable. Of course they know technology, but the best know how to remove the studio from the recording and focus on the player and the tone. They know what makes a song work. Those types of skills are hard to teach. Yet there are endless ways to try.

At Appalachian State University, a beautiful brick-lined campus nestled into the hills of western North Carolina, in the picturesque town of Boone, music is clearly and decidedly the foundation of a recording education. All students must first apply to the Hayes School of Music and audition on an instrument. Once within the school, they can apply for a Bachelor of Science in the Music Industry Studies major, which is further broken down into one of three program concentrations: Manufacturing and Merchandising, Marketing and Promotion, and Recording and Production.

There are recital rooms and recital halls and classical venues, featuring student, faculty and guest performances throughout the year, and all MIS majors must continue with their instrument
through the four years, whether solo or in ensemble. They also must complete a minor in the School of Business, in addition to the core MIS classes and general-ed requirements, in addition to their program concentration. It’s a busy schedule, and it’s meant to be. The philosophy is based on a well-rounded understanding of the entire music
industry, with, in this case, an emphasis on recording—although not all students are recording.

“We hear regularly from internship supervisors and employers of our alumni that the musicianship of Hayes School of Music students stands out and provides tangible professional benefit for
our students,” says ASU Dean William L. Pelto. “As with all of our degree programs, we continue to place emphasis and value on core musicianship skills, because we know they are essential to later musical and career achievements.” 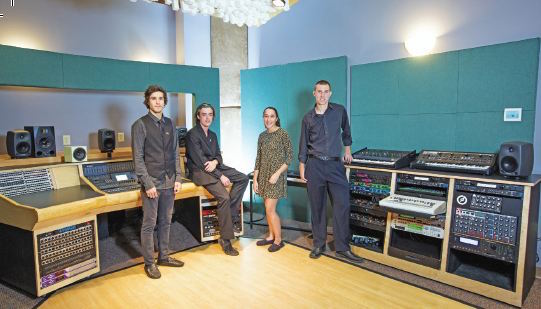 There are roughly 120 students within the MIS department at any one time, and recording and production accepts a maximum of 15 per year. Through attrition, that might dip to 10 or 12 by
senior year. Class sizes are kept intentionally small, with support from the university, so that students can start hands-on training on Day One and receive personal instruction throughout. It also tends to foster cross-pollination and integration among students in MIS, and within the larger school of music. If you need a trombone player to replace a harmonica part, you can find four options down the hall. If you need help on a live performance in town, a recording student is there to record, and a marketing student will be there to promote it.

“Our dean has been so supportive of the department,” says Kim Wangler, director of the MIS department. “We have brought the program down in size a little bit so that we can focus on
the quality and not the quantity of students. I teach a lot in the Core curriculum. My job with the engineers is to expose them to all aspects of the industry so that while they’re waiting for their
recording career to ramp up, they can get jobs throughout the industry.”

Wangler is an interesting blend of a nurturing mother who meets every single student individually on the first day, and no-nonsense businesswoman who can both poke holes in a senior’s proposal and champion a music festival fundraiser to benefit a local nonprofit. She owns a side company, Bel Canto Reeds, which does a good business in reeds for bassoons, and
only bassoons. She’s played the wind instrument since the fifth grade. She knew that she wanted to be a music teacher in the third grade.

beginnings on a Commodore 64 computer, learning to program BASIC, then DOS, then stumbling across MIDI playback at a computer show he went to with his dad. By ninth grade he had a Yamaha keyboard and full Cakewalk-centered MIDI sequencing rig with Tannoy monitoring, assembled piece-by-piece, often out of order.

After Edison Community College in Fort Myers, Wynne went to Eastern Kentucky University for a degree in composition, where he would drop in the broadcast facilities because they had Cool Edit and he could do 2-track editing. He then earned his master’s in media writing and production at the University of Miami, where he was exposed to his first Sony and Euphonix consoles and became instantly hooked; his technology and studio chops matured under the guidance of Raul Murciano, among others. Wynne was expecting to head back to Fort Myers after graduation and open a small studio when he got a call from Michael Zager at Florida Atlantic University, who was looking for a part-time engineer and instructor, $20k a year, 20 hours a week, who could also help build and maintain a studio. Murciano had recommended him; he took it.

Four years later he accepted the position at ASU. Like Wangler, who had arrived a year earlier, he was lured by the university support and the opportunity to create a new model. ASU when Wynne arrived was in a decent place. They had WSDG (Walters-Storyk Design Group) designed studios, A and B, built while Michael Fleming ran the program. While Wynne still marvels at what Fleming, who moved on to MTSU, and then Sam McGuire accomplished with the infrastructure, his first order of business was to create some sense of cohesion with technology platforms.

“They were running Nuendo at the time, a great auxiliary program, but then they had a bunch of Macs in the lab,” Wynne recalls. “Michael had inherited some gear, and then Sam made some choices. They had a Creation Station from Sweetwater. We had RADAR and Pyramix. We were dealing with a myriad of small, different issues. When I came in 2006, it was a matter of bringing Pro Tools online, bringing in the DM2000, and, ultimately, the SSL.”

Along the way, Wynne continually added boutique outboard gear, better mics, Marquette Audio Labs I/O, a variety of AD/DA and much more. The biggest advance in the past year, console aside, was the installation of a Focusrite RedNet-based Dante network.

“The Dante infrastructure allows both studios, A and B, to talk to a central machine room for our outboard effects processors,” Wynne explains. “We have a System 6000, Lexicon 960, Bricasti Designs System 1, an Eventide reverb, a spring reverb. Now we can do sample rate conversion with the effects processors allowing studios to be at different sample rates and talk to any of the high-end digital or analog effects units. In November we’re upgrading the concert hall stage and dropping in 10 channels of Cat-6 that will hit a switch in the Rosen [concert hall] control room. Dante is definitely robust. And it’s functional.”

Long hours are the norm for App State MIS students. Beyond their major and minor coursework, commitment to their instrument, and preparation for a full-credit, final-semester internship, they are also encouraged to get involved with the Boone community.

“We have a weekly show at Lost Province brewery, where we work with them to book the talent, give management and marketing students a chance to work with artists, and get our engineers live sound experience,” says Wangler, adding that a recent grant proposal funded an Allen & Heath console for their portable rig.

“We do a singer-songwriter night at Chick-fil-A once a month; they’ve been a great partner,” she continues. “We do a holiday event where we partner with the town and the local chapter of the Nashville Songwriters Association International to put on a singer-songwriter showcase the first weekend in December. And this spring we’re partnering with an event called Village Vision, a musical, artsy local vendor, working with them so that we get our feet wet in the music festival business. And then our major fundraiser is a 5k race called Music Moves My Sole, where we put the money raised into our recording projects for the label. It’s been very healthy for us to do more in the community.”

Wynne’s philosophy is one that seeks to prepare a student for whatever might come up, to give them the skill set to troubleshoot any problem, whether artistic or technical. “When a student graduates and goes to a studio, my hope and dream is that they know how to make any job that much more effective and quick,” Wynne concludes. “I want them to be able to say yes to as many opportunities as present themselves.”