NEW YORK: “These speakers sound OK, but that’s not good enough. Something isn’t right with this room.”* In May 2014, Harman International acquired an expansive space at 527 Madison Ave. (54th St.) for its flagship experience center. Designed to showcase their full range of consumer and audiophile equipment, the street level would be devoted to Harman’s AKG(r), Harman Kardon(r), JBL(r), and other respected brands. The lower level would feature a screening room and, behind a discrete sliding door, a private listening room outfitted with Harman’s premium Mark Levinson(r) amplifiers, and award-winning Revel Salon2 Speakers, a CD/SACD Disc player, and a turntable for vinyl aficionados. After six months of construction, the showroom and its listening room were ready for a trial run. Surprisingly, despite meticulous planning and design, it was clear to the true audiophiles in the room that something was amiss. *Harman exec.

“The sound we heard on that first demo would have pleased untrained ears, but we instantly recognized an absence of resonance, separation, sonic clarity, and warmth,” explains Harman Lifestyle Division Senior Manger, Retail, Jamie Feuss. “We know how Mark Levinson preamps, amplifiers and CD/ASCD players are supposed to sound, and we appreciate the unparalleled power, and clarity of Ultima 2 speakers but we weren’t hearing it. The problem had to be corrected before we could invite true audiophiles for demos.” 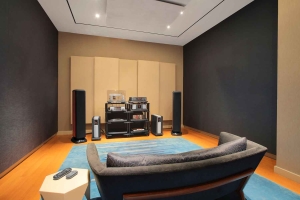 “The original acoustician enlisted to test the room recommended an extensive, lengthy and, costly process, which included wall and ceiling reconstruction, and complex rewiring,” Feuss says. “We were committed to a November opening in time for the holidays, but beyond that, the recommendations seemed excessive and expensive. We called the Walters-Storyk Design Group for a second opinion. Architect/acoustician John Storyk made a site visit in September and performed a series of acoustic modeling tests and measurements. He discovered a total absence of bass control, and an astonishing lack of low frequency compensation. With a resume that includes Jazz At Lincoln Center, Le Poisson Rouge, 54 Below and personal recording studios for Bruce Springsteen, Alicia Keys, and (back in the day), Jimi Hendrix, John Storyk’s acoustic instincts are unerring. WSDG enabled us to meet our opening deadline, and the response to the sound system and the room has been universally favorable,” Feuss adds.

“We encounter similar conditions on many of our room analysis assignments,” John Storyk reveals. “Most of our work is focused on the design and construction of new recording studios and critical listening rooms. When we participate at the drawing stage, we eliminate potential diffusion, reflective sound, absorption and other acoustic complications prior to construction. In pre-existing environments, baring serious sound leakage (into or out of the room), which can entail costly room-within-room construction, many of these issues can be resolved by the judicious application of custom low frequency control applications which were the key missing elements in this space. 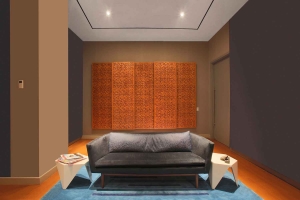 “As in most untreated small rooms, the interior environment’s modal behavior typically results in the uneven spacing of Eigen tones (commonly called standing waves),” Storyk says. “By re-ordering these modes (specifically controlling their relative amplitudes) with topical treatments, we were able to maximize the successful linear reproduction of sound for the Mark Levinson audio components and the Revel Ultima 2 Speakers in the Harman room,” he explains. “Both the rear wall perforated wood / Helmholtz Resonator and the suspended ceiling clouds contribute to low frequency control. We applied additional broadband absorption to the front wall to compliment the existing carpet and, to slightly reduce the room’s broadband / mid-frequency reverb time (decay rate).

“These surface treatments resolved all the acoustic issues in a timely, efficient and cost-effective manner,” he adds. “And, in addition to being acoustically efficacious, they’re aesthetically pleasing. We literally ‘tuned’ the room, just as a musician tunes his instrument or a mixing engineer finesses a recording during the mastering process. The listening room now empowers this extraordinary Harman technology to provide audiophiles with the ultimate listening experience. 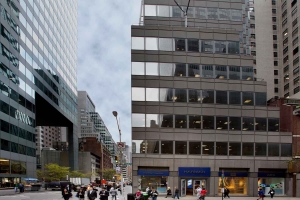 “Most people do not have ‘calibrated’ listening skills” Storyk concludes. “While some may pick up on the benefits of superior sound quality if they encounter it, many are satisfied with lo-fi systems and the now sadly ubiquitous ear buds. Ultimately, everyone, from the most discriminating audiophile to Baby Boomers and Millennials need to recognize the fact that their system’s environment is as crucial a component as their woofer, speakers, tweeter or turntable. If their room isn’t tuned, the sound of their music will suffer.”