BOSTON, MASS. Berklee College of Music opened the doors to its 160 Massachusetts Avenue, residence tower in January 2014. The building now features one of the largest, most progressive, and versatile professional audio teaching/production/performance complexes in the U.S. Over three years and $100 million have been invested in the development and construction of this cusp point educational compound. Situated over four dedicated floors in a striking, sixteen-story, 155,000 sq. ft. William Rawn Associates building, the ten-studio Walters-Storyk Design Group – designed, audio education component represents a pinnacle of contemporary studio planning.

A commanding floor-to-ceiling glass wall overlooking Massachusetts Ave. distinguishes the 21,400 sq. ft., 400-seat ‘Berklee Café.’ Originally conceived as a student-dining hall, early in the design phase, Berklee senior staff recognized an opportunity to utilize the space (replete with a 38’ high ceiling, and a gracefully curved, 2nd floor balcony), as a live performance/recording venue for students. WSDG was tasked with devising optimal acoustical treatments for the showplace and with providing total connectivity to multiple control rooms throughout the 23,800 sq. ft.’ A & B level, recording education complex. Nightly student performances began in January, quickly establishing the room as a superb talent platform and (not incidentally), an outstanding ‘live recording room.’ 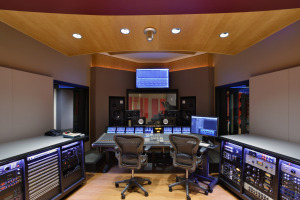 “WSDG has not only designed many of the world’s best studios, they closely monitor the smallest construction details to insure that they are built to impeccable standards,” states Roger H. Brown, President, Berklee College of Music. “We are delighted with the outcome, both in the studios they designed for our campus in Valencia, Spain and with this new suite of studios in our 160 Massachusetts Avenue building. Berklee students deserve the best, and now they have the best.”

Two stories below the Café, on Level A, the 2200 sq. ft. Studio 1 features a 1300 sq. ft., 13’/h, live room designed to accommodate an orchestra of up to 50 musicians. As the largest 160 Mass studio, this cutting edge recording/mixing suite includes: a 600 sq. ft. Control Room for classes of up to 16 students, and two oversized 110 sq. ft. ISO rooms. Extremely useful for multi artist recording projects, they compliment the WSDG-designed studios at the Berklee Valencia campus.

“Studio 1 engaged a number of innovative design elements,” reports WSDG Partner/ Project Manager, Romina Larregina. “Because it is clearly a ‘star’ attraction, Berklee College of Music President, Roger Brown and the executive team envision an on-going series of student tours through the complex. Faculty members were concerned that the panoramic 12’/w x 5’/h corridor window into the live room might prove a distraction to student musicians. To ameliorate this anticipated problem, WSDG recommended fitting the window with clear glass Quadratic Residue Diffusers. These custom-built treatments were precisely calibrated to diffuse the studio’s frequency range. Joined together as a single ‘sill-to-top’ installation they enhance the live rooms’ acoustics, provide visitors with an expansive view, and maintain the privacy required by working student musicians. 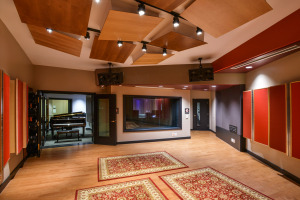 “The 1500 sq. ft. Studio 2 was designed for smaller ensemble recording projects, and features a 120 sq. ft. ISO Booth, and 360 sq. ft. Control Room,” Larregina continues. “The Lee Kennedy Co. Inc. contractors deserve tremendous credit for their contribution to this project. Each studio represents the latest word in room-within-room construction. Each studio is acoustically de-coupled and allows for zero tolerance in terms of sound leakage,” she adds.

Level A also features one of two 120 sq. ft. ‘tiered’ Central Machine Rooms (CMR), which represent a formidable achievement in ‘enhanced connectivity.’ “Due to the extensive amount of technology required by 160 Mass., we split the distribution within two fully integrated rooms, The Level A CMR is positioned directly above the Level B CMR,” Larregina explains. “This vertical configuration was extremely logical. Our long-time Systems Design & Integration Specialist Judy Elliott-Brown accomplished literal miracles in one of the most challenging wiring projects we have ever encountered.”

A twenty-five year WSDG veteran, Elliott-Brown has been involved with the 160 Mass. Ave. project since the project was awarded in 2011. Tasked with routing, running and connecting upwards of 100,000 feet of analog audio, video, CAT-6 and speaker wire with over 30,000 connections via some 5500 individual connectors throughout the three-floor recording, producing, mixing and teaching complex, Elliott-Brown considers 160 Mass one of the most complex assignments of her career, (a track record that includes NYC’s Jazz At Lincoln Center; SF’s Ex’pression College of Digital Arts; Village Studios, Guangzhou, China; and NYU’s James L. Dolan, Music Recording Studio/Teaching Complex). Collaborating with Berklee College of Music Chief Engineer Burt Price, and Jerry Smith, Senior Director of Technology for the Writing and Technology Division, and enlisting the creative design assets of the entire WSDG global team Elliott-Brown encountered and resolved innumerable systems infrastructure issues.

“Over the three years that this project evolved from initial drawings to fine tuning, our primary mandate was to remain open to change. Technology shifts, room repurposing and functionality remained fluid well into the construction period,” Elliott-Brown says. “The most significant refocus was the decision to refashion the Cafeteria from a traditional dining hall into a performance venue. In retrospect this seems like an obvious call, but it was a brilliant expansion of the iconic role this three story high, glass-walled hall will now play in this complex. It presented some interesting acoustic and wiring challenges, but the benefits to Berklee students and guests will be enormous. Fortunately, the decision was reached early enough in the construction stage for us to accomplish the changes in a timely and efficient manner.”

Elliott-Brown supervised the system installation crew led by Redco Audio of Stratford, CT. She estimates that over the past three years she has devoted upwards of 2240 hours to 160 Massachusetts Ave.

Level B is comprised of five independent suites of varying size and purpose. Created for small ensemble recording, the 1100 sq. ft. Studio 3, features a 320 sq. ft. Control Room, a 140 sq. ft. ISO booth, and a 600 sq. ft. Live Room. Larregina refers to the 400 sq. ft. Mastering/ Critical Listening Lab, as a ‘self-contained Sweet Spot.’ “The precise acoustic tuning of this studio will provide classes of up to twelve students with an impeccable listening experience, one which will be difficult to match in the ‘real world,’” Larregina adds.

“As a former professional engineer I’ve logged countless hours in recording studios,” Carl Beatty remarked. “My interior design experience began with WSDG on Berklee’s Valencia, campus which has a ‘Destination Studio’ rather than a classroom vibe. Because 160 Mass. is a dedicated teaching facility, we envisioned an unequivocal pro studio setting. Beth and Sylvia prepared an expansive canvas of gold, ocher, lavenders, blues and other harmonizing colors, to enhance each room’s distinctive character. This complex bristles with technology, but its variable acoustic treatments, silver diffusers, dramatic ceiling clouds and other auditory elements are complimented by carefully considered aesthetics orchestrated by WSDG.”

Walters describes the three-year design/construction mission as, “An exceptional opportunity for WSDG to collaborate with brilliant clients and an outstanding architectural firm. Our challenge was compounded by the fact that we were simultaneously engaged in integrating our design for Berklee’s five studio Valencia Campus, in Spain,” she says. “The major differences between these two projects were scale and location. Berklee Valencia is set within the ultra-modern, Palau de les Arts Reina Sofia arts/performance complex, a world-renowned building. Boston’s four-floor, 52,654 sq. ft. audio education complex is the hub of a 16-story, ground-up building. Virtually every member of our international team made a meaningful contribution to both of these formidable endeavors. It is extremely gratifying to walk through 160 Mass. today, and know that WSDG helped to bring it to life.”

WSDG co-founder/architect/acoustician, John Storyk concludes, “Projects on this scale are extremely rare. Berklee College of Music President, Roger Brown, Assistant VP Carl Beatty, Jay Kennedy, Vice President for Academic Affairs/Vice Provost, and their entire executive cadre are among the most astute and forward thinking educators we have ever worked with. Their insights and recommendations were invaluable, particularly in proposing the Café as a performance/live recording space. A brilliant decision, albeit one, which presented considerable acoustic design challenges at that stage of the project. However, their prescience reflects a unique grasp of student needs. And, The Café was immediately recognized as the jewel in the 160 Mass. crown. Berklee College of Music has introduced a new standard of professionalism and commitment to a rapidly evolving career path. WSDG was privileged to contribute to this significant addition to America’s educational infrastructure.”