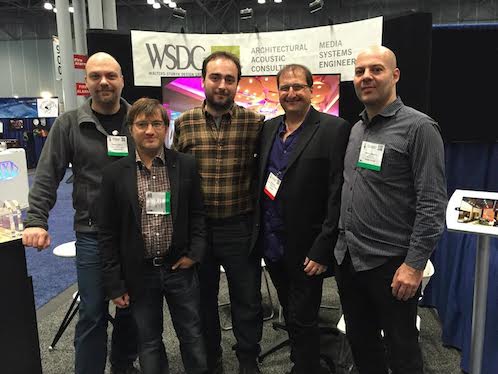 NEW YORK:  Extending their reach to Mainland China, Spain, Italy and the Middle East, WSDG-Walters-Storyk Design Group Co-Principal/Director of New Business Development, Sergio Molho has welcomed five accomplished members of the international pro audio community to WSDG’s growing global family. Víctor Cañellas, a skilled Acousmatic Sinologist and Su Weilie, a respected Architect/Interior Designer will represent WSDG throughout China. They will also participate in the creative and technical acoustic aspects of projects, which they initiate for WSDG.  Concurrently, Lluis Moreno has been named representative in Spain; Giulio Curà, will rep the firm in Italy, Federico Petrone will cover Buenos Aires, and Jesus Cardoso will serve as rep in Mexico.

Víctor Cañellas — Acousmatic Sinologist / Representative has been a successful acoustician/sound designer in China since 2003.  His expertise in developing acoustic interfaces for visual arts in performance venues contributed to the Park19 and LOFT345 clubs in Guangzhou and the La Fura dels Baus in Beijing. He also served with Jocaui Acoustic Panels and Soundbox Acoustic Tech. His knowledge of ‘Eastern thought and logics’ provides a solid foundation for him in his role with WSDG.

Su Weilie  — Architect / Interior Designer / Representative is a Guangzhou native who studied Construction Engineering at Hunan Institute of Technology and Architecture, and City Planning at Wuhan University of Technology. In 1990 he joined the Panyu Bridge Group Company and participated in the design of the Nansha Tian Hou Temple restoration project. In 1994 he worked on the Guangzhou Olympic Garden, Panyu Museum. He has worked on the Guangzhou Natural Park development, and on luxury hotel, office and historical building projects.

“Expanding WSDG’s international service and client base is a primary component of our business plan,” Sergio Molho asserts.  Spain: WSDG Rep, Lluís Moreno was a successful live sound engineer, before starting his own rep business in 1993.  Based in Barcelona, he worked with such U.S companies as Sam Ash, Guitar Center, Ace Music and Mars Music, and leading Japanese music stores. A14-year relationship with Universal Audio increased his digital recording expertise. In 2005 he co-founded Mas Acoustics with WSDG Project Engineer, Marc Viadiu, who also represents WSDG in Africa and the Middle East. Moreno and Viadiu quickly established Mas Acoustics as one Spain’s leading acoustics solutions firms. In 2008 they joined engineer, Giulio Curà to form a formidable Italian acoustics consultancy.

Italy: Giulio Curà studied Electronic Engineering at University of Pisa and University of Bologna. After graduating in 2006, he served as a sound engineer for studio sessions, live performances and broadcast events. In 2009 Curà joined Mas Acoustics in Italy as an acoustic designer, consultant, commercial manager, and specialist in studio design and noise control. Based in Florence, Curà is fluent in Italian, English, and Spanish.

Mexico City: Jesus Cardoso is a classically trained musician and award-winning, composer whose interest in audio engineering and cutting edge technology led him to establish Audio Gate International, Inc. one of Mexico’s most successful pro audio distribution/systems integration firms.  His knowledge of the country’s studios, and close relationships with artists, producers, engineers and studio owners will be valuable assets in bringing WSDG to the attention of this important market.  Working with Cardoso is Project Engineer Javier Vyero Villarroel.

“WSDG has a long history of successful international relationships,” Molho says. “And, we have maintained fully staffed offices in Buenos Aires, Belo Horizonte, and Basel, for many years. In 2013, leading Mumbai-based pro audio/film industry pro and engineer, Aditya Modi was named WSDG rep in India where we are currently working on a major studio project for Oscar-winning film composer, A.R. (Slumdog Millionaire) Rahman.

“In the U.S. Bob Skye, a SF-based electro/acoustic designer, studio construction expert joined us in 2013, and in 2014, Grammy-winning engineer/ producer/studio-owner Robert Margouleff came on board to serve in a similar role in LA,” Molho concludes. “Each of our offices is staffed by specialists with exceptional skills in acoustic measurement and isolation, systems integration, construction management, CAD and related proficiencies.  Cumulatively they represent an invaluable talent pool.  Our world-wide clients benefit immeasurably from this comprehensive resource.”