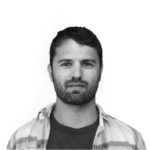 Andy earned his B.S. in Physics and developed computer modeling and laboratory measurement/data capture skills from UMBC (Baltimore).  His first job was in analytical chemistry for a Maryland based pharmaceutical company.  Once he’d had enough “Big Pharma,” he switched career paths and moved to NYC to become a double threat musician/audio engineer (drummer and mastering).  In addition to enhancing his listening and audio production skills, Andy acquired hands-on construction credentials while helping build a new location for Studio G in Brooklyn.  That project rebooted his interest in electroacoustics, architectural acoustics, and acoustic prediction, measurement and modeling.  In 2015, he joined WSDG as an intern. Three months later he was an acoustic engineer, applying his modeling and measurement skills, making recommendations for a variety of acoustic projects, and tuning audio systems.