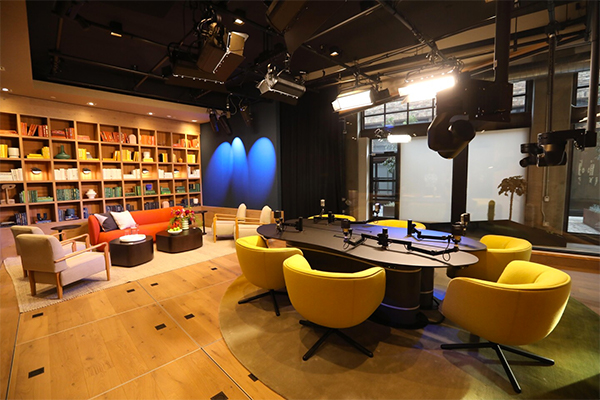 The main studio in Pod City, a core part of Spotify’s new downtown campus, which supports recording of podcasts and other programming.(Genaro Molina / Los Angeles Times)

The employee sprawl continued as the Swedish company expanded into the podcasting business, acquiring L.A.-based production companies the Ringer and Parcast. The need to establish a central space where everyone could collaborate became even more paramount.

The campus — which can accommodate as many as 600 employees — encompasses 18 podcast studios, a theater, an indoor stage and places for musicians to tinker with vintage instruments, including a piano once used by singer-songwriter Norah Jones.

“You think about where the streaming industry is — it really is centered here,” Holt, Spotify’s global head of podcasts and new initiatives, said in an interview. “We want to be able to have the right home for our teams and for the creator community … that’s why we’re investing in L.A. It’s an important city for Spotify.” 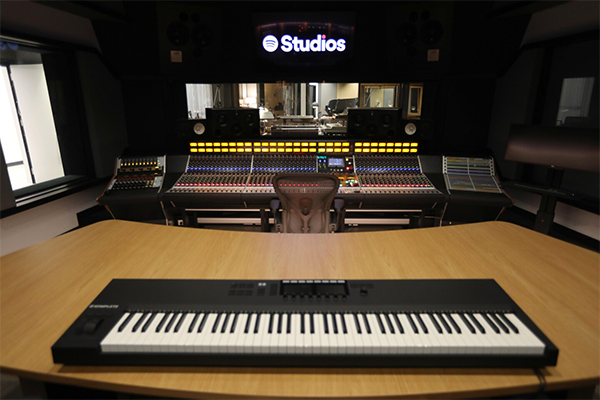 The new facility is emblematic of Spotify’s rapid transition. Founded in Sweden in 2006, the company began as a music streaming service but three years ago began an ambitious foray into podcasts, rebranding itself as an audio company.

It acquired several podcast businesses such as Gimlet Media, the New York-based producer, and Megaphone, a Reston, Va., business that provides ad-linking tools for audio programs.

Beyond centralizing its podcasting business in one place, the new Los Angeles operation allows Spotify to reduce the costs of paying outside vendors, attract and nurture new talent, and produce more original shows that it can own and distribute.

“Spotify built itself as a company that creates a solution for people to stream music from the start, and they’re beholden to doing deals with all the major labels and paying out streaming royalties, but the issue for them has always been they never owned any of it,” said Travis Dunlap, a digital media agent with WME. “They saw a massive opportunity with podcasting and that they can start funding this content and be engaged with the partner on it and having an ownership stake in the actual content itself.”

Spotify — which released 108 new, original and exclusive podcasts in the third quarter — has a wide range of audio programs on its platform spanning various categories, including true crime, news and pop culture. Among the most popular programs are “The Joe Rogan Experience” and New York magazine’s investigative podcast series “Cover Story.”

Shows recorded in Pod City include “The Bridge: 50 Years of Hip Hop”; “Higher Learning With Van Lathan and Rachel Lindsay,” where the hosts discuss Black culture, politics and sports; and “Nosy Neighbors,” hosted by comedians Candice Thompson and Chinedu Unaka.

Today, Spotify has an estimated 28.2 million monthly U.S. podcast listeners and is estimated to surpass Apple Podcasts by year’s end, according to research firm eMarketer. In addition to podcasts and music, Spotify has increased its video efforts, releasing footage of its hosts recording their podcasts last summer.

“This was a really great attempt to try and create the most forward-thinking and future-proof strategy around how we can do production that’s going to be dynamic and nimble to meet the needs of the platform and consumers,” Holt said.

Spotify continues to make acquisitions to expand its reach into audio content. Facing competition from Clubhouse, which hosts live audio chatrooms, Spotify launched its version called Greenroom from its acquisition of Betty Labs in March. With Amazon’s audio books giant Audible increasing its scripted podcasts in areas such as comedy, Spotify said it would buy audiobooks business Findaway in November.

Holt says he views Spotify as content agnostic — giving creators the tools to put out content through different forms on the streaming service, whether that’s an audiobook, podcast or music.

“The company broadly continues to believe in and invest in the broader audio industry,” Holt said.

The new facilities can be appealing to talent, especially those new to podcasting who may not have production facilities in which to record audio and video, Dunlap said.

“It’s enticing to partner up with someone like Spotify because it’s kind of a one-stop shop for all their needs,” Dunlap said.

Spotify executives declined to say how much they invested in the L.A. campus, but the company disclosed last year that it planned to spend nearly $100 million on building out its offices in L.A., Mumbai, Miami and other cities.

Spotify faces fierce competition from such rivals as SirusXM and iHeartMedia that have also invested heavily in podcasts.

“They were fast out the gate in terms of doing some bigger deals,” Dunlap said, “but now the rest of the industry has caught up, so there’s more competition for them in general.” 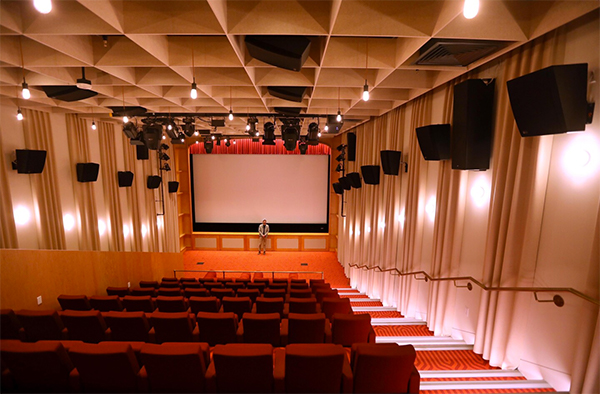 The campus is part of the At Mateo complex on Mateo Street, near the trendy Girl & the Goat restaurant and a space occupied by USC Roski School of Art and Design.

Spotify occupies more than 150,000 square feet, which is considered among the largest leases signed in the Arts District. The company worked with L.A.-based RIOS and New York acoustic consulting and media systems engineering firm WSDG to design its L.A. campus.

“Our At Mateo space truly is the house that audio built,” Dawn Ostroff, Spotify’s chief content and advertising business officer, said in a statement. “It embodies where we’re headed as a company, our commitment to audio and our vision to create an immersive community for creators.”

Visitors to Spotify’s main L.A. building enter a security entrance surrounded by black fencing similar to that used atmusic concert entrances, with background lights that change colors and music streaming from Spotify. There are colorful listening rooms, including one where Spotify’s music team can meet with artists to discuss their latest songs while lounging on velvet couches set against round windows.

“We thought an awful lot about creation and creativity, how people interact with places and what makes you feel inspired,” said Chris D’Angelo, head of Spotify’s production and studio facilities. 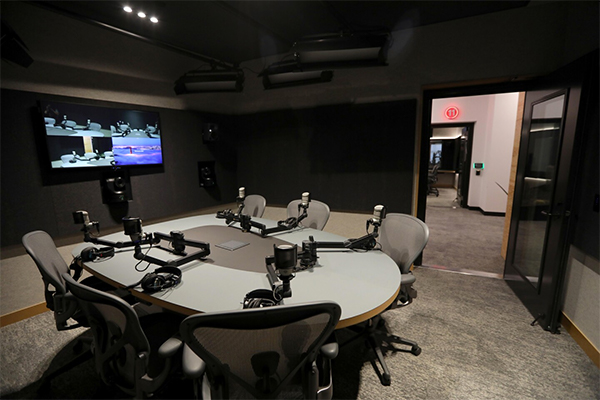 Next door is “Pod City,” which holds the largest number of podcast studios of all of Spotify’s U.S. offices. 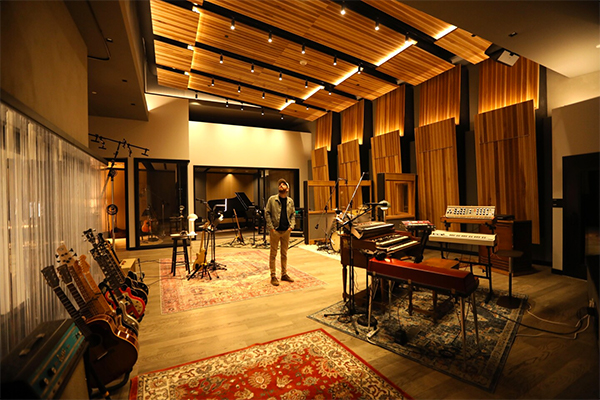 A third building is focused around live events and music. It opens to an indoor stage, with space for an audience of up to 600 people on the lower floor and a VIP space on an upper floor. There are music recording studios, an echo chamber and a trove of vintage musical instruments including a 1935 Rickenbacker guitar for artists to tinker with.

Spotify’s L.A. office complements other entertainment and tech companies in the Arts District, including Warner Music Group that opened its West Coast headquarters on Santa Fe Avenue in 2019 inside a former Ford assembly plant, where about 650 people work. In 2020, Honey by PayPal, which creates price comparison online tools, moved into a 130,000 square-foot space.

“With its new campus downtown, Spotify will tap into our city’s energy and creativity and create new opportunities for Angelenos to shine,” Mayor Eric Garcetti said in a statement.

Other locations were considered, including West Hollywood, but Spotify chose the Arts District in part because it had the space needed, Holt said.

“It’s such a storied history of creativity and it’s such an inspiring place to be day to day, that we just fell in love with it,” D’Angelo added.