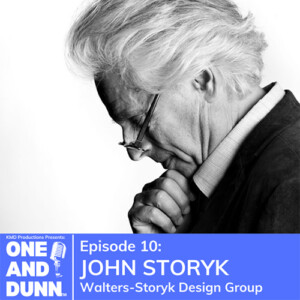 “When I attend an AES or NAMM event it’s obvious that everyone in the room has a deep passion for music,” Storyk says. “As an amateur pianist and sax player, I spent my college years in bands. And, as I meet old friends at conferences and conventions we all have stories about gigs. Some of them were debacles, and some of them were fantastic, but all of them were unforgettable. That musical brotherhood and sisterhood remains the ‘instrumental and unifying’ force in all our lives,”

This One And Dunn™ Podcast episode runs the topic gamut from learning his craft to evolving into an adjunct professor of Architectural Acoustics for the Berklee College of Music (Boston). It delves into Storyk’s commitment to “Making dreams happen for other people” and explores his personal passions for Italian opera, flying small planes, scuba diving, and baseball. The discussion also expands into his love of family, his business (and life) partner Beth Walters’ contribution to WSDG’s success, and the abiding connection to the art of music, which he shares with virtually every member of the pro audio universe.