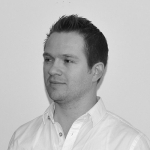 Joshua Morris graduated from the University of North Carolina in Charlotte with two Degrees, a Bachelor of Arts in Architecture and a Bachelor of Architecture.  A love of music has led him to seek a combination of architecture and acoustics, beginning with his thesis on acoustics.  Additionally, Josh has been educated in the Suzuki method for violin since age three, making acoustic design a natural choice for a career path.  Joshua joined the WSDG team in January of 2005, moving from North Carolina to New York, and quickly settled into a key role as a project manager, designer and now partner.  Since then he has managed dozens of projects from China to the United States to Germany, and continues to add more skills to his design vocabulary each day, while refining his already well developed practice as a luthier.Joshua enjoys writing, playing and recording music both solo and in any one of his several musical projects (from rock to traditional Irish), as well as designing and building lamps, furniture and instruments (so far he has built a resonator and an electric mandolin).Favorites:Harold Washington Library Center, ChicagoRadio City Music Hall, NYCKursaal Center, San SebastianPark Güell, Barcelona Grand Tetons National ParkGeorge Kolbe’s MorningWatership Down by Richard AdamsSirens of Titan by Kurt VonnegutFor Whom the Bell Tolls by Ernest Hemmingway InterpolAndrew BirdPearl Jam